DSM-5 categorizes PNES as a functional neurological disorder or conversion disorder with seizures. It is essential that neurologists, psychiatrists, and other clinicians coordinate care to ensure that patients with PNES receive a prompt diagnosis. 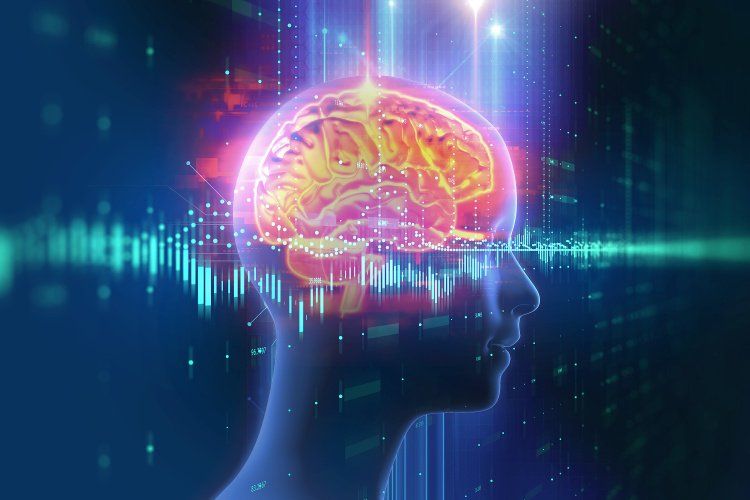 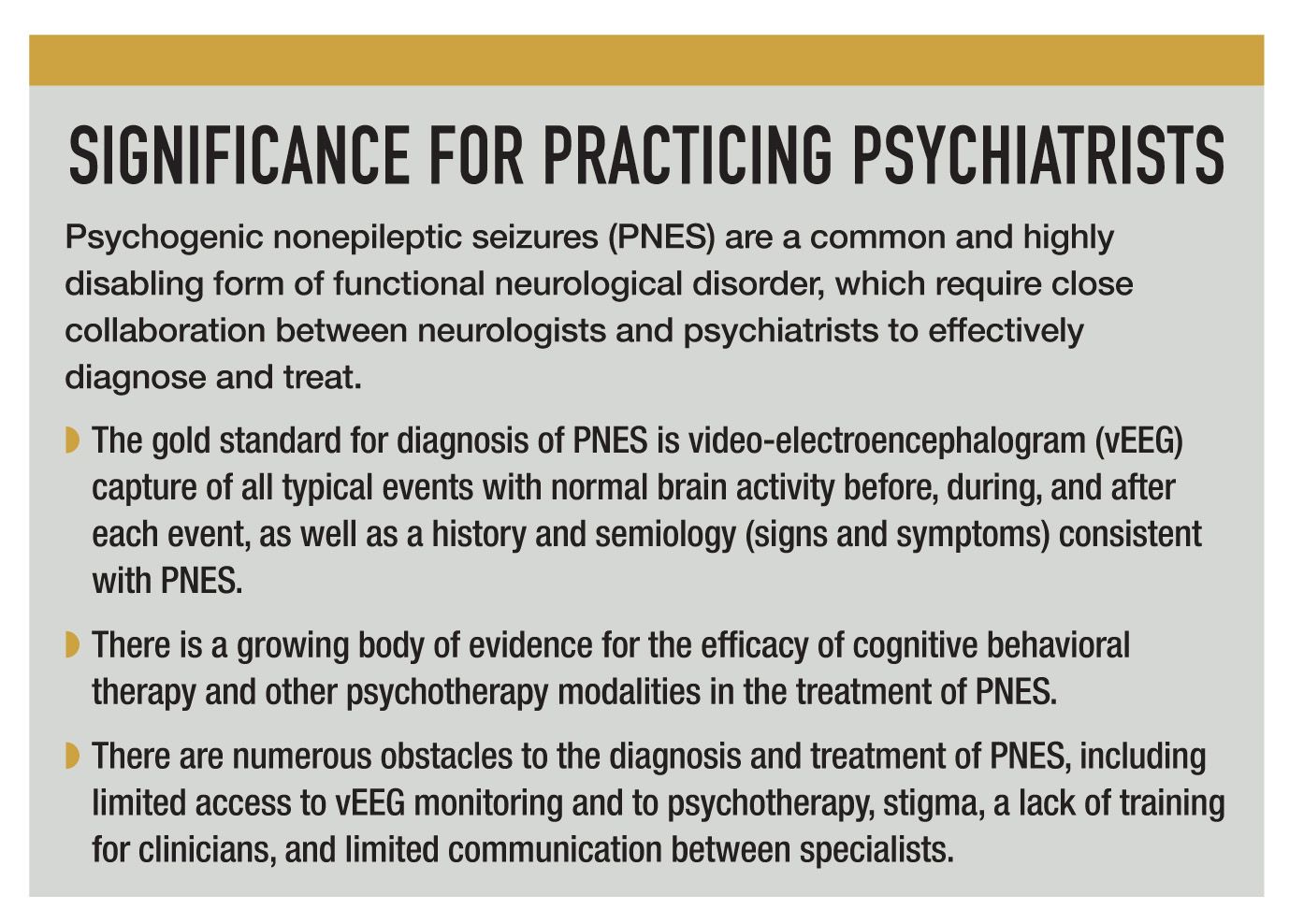 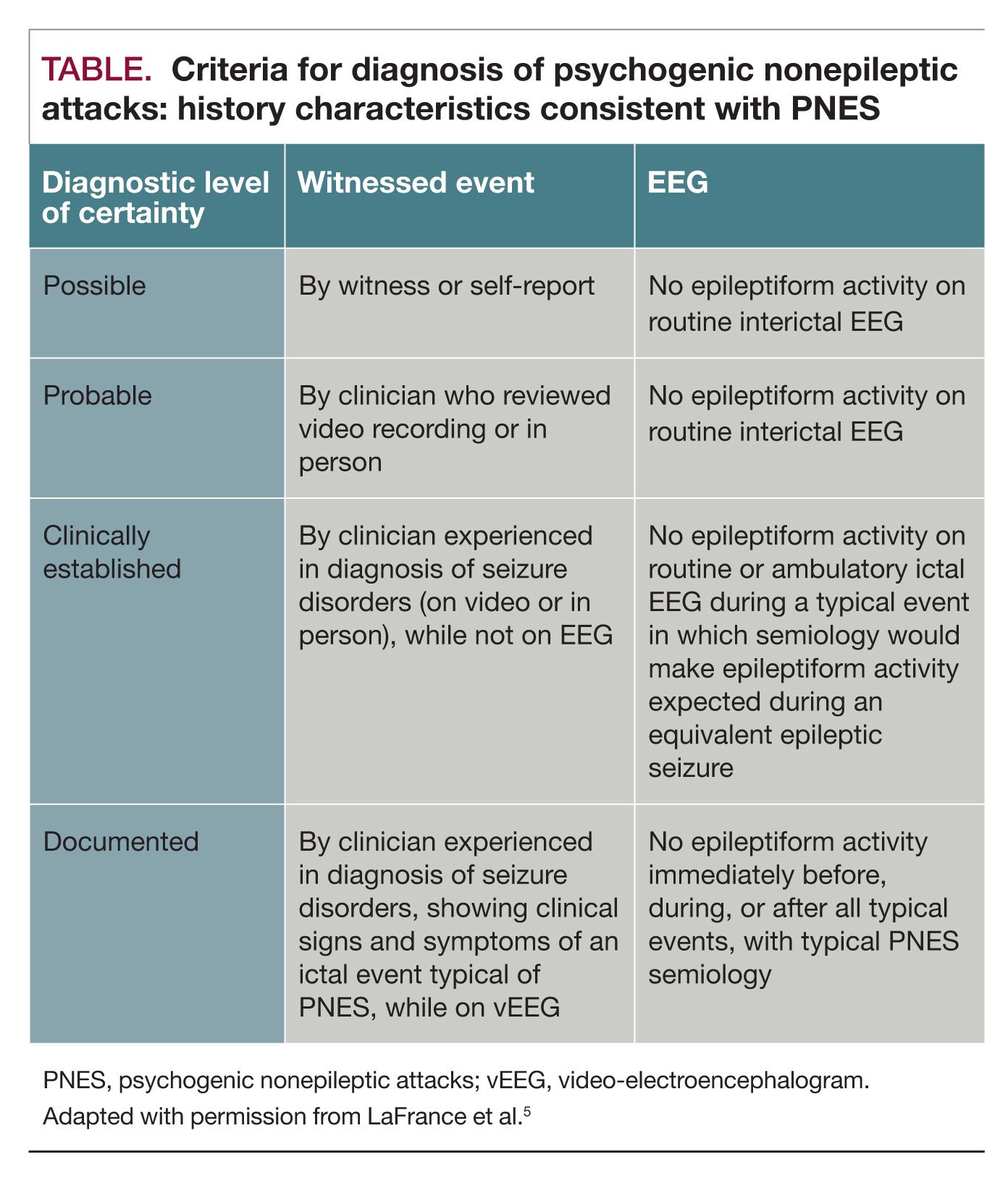 Janice, aged 42 years, has been having seizure-like events for the past 4 years, uncontrolled by a series of anti-seizure medication trials. During the seizures her body shakes uncontrollably, her back arches painfully, and she frequently falls. Her surroundings appear blurry, and sounds are muffled or entirely inaudible. Afterwards, her memory of the seizure is patchy and incomplete, and she is sometimes entirely unaware she has had an event.

Janice has been unable to work and is on medical disability from her job as a home health aide. She left a physically abusive relationship 2 years ago and now spends much of her time alone. She has lost interest in visiting with friends and sleeps for much of the day. She attributes her depressed mood and increasing anxiety to the frequent seizures and to her doctors’ failed efforts to treat them.

Prompted by the failure of 5 different anti-seizure medications over 4 years, Janice’s neurologist refers her to a tertiary care epilepsy center. In the epilepsy unit she is continuously monitored with digital video-electroencephalogram (vEEG) and electrocardiogram for 5 days while her anti-seizure medications are withdrawn. Two typical seizure-like events are captured on vEEG, and based on normal brain activity and the clinical appearance on video review, the diagnosis is psychogenic nonepileptic seizures (PNES).

Janice is advised to obtain psychiatric care and given contact information for three psychiatrists: one is not accepting new patients, one did not accept Janice’s Medicaid insurance, and the third offers her an appointment in 6 months. When Janice finally presents for the appointment, she has a seizure in the waiting room, prompting the psychiatrist to summon paramedics who take her to a hospital emergency department. Janice is discharged with instructions to follow up with her neurologist. When she calls the neurologist, he tells her that she does not have a neurological disorder and that she should schedule another appointment with the psychiatrist. When Janice calls the psychiatrist, he tells her that she has a neurological problem and requires further neurological evaluation.

Finally, frustrated by the back and forth, Janice’s primary care physician refers her to a second epilepsy center, where she is again evaluated with vEEG and confirmed to have PNES. This time a neurologist and psychiatrist collaborate and jointly make and communicate to Janice a diagnosis of PNES with comorbid MDD. Venlafaxine is initiated, and Janice is referred to an outpatient psychiatrist and psychotherapist.

Janice receives intensive weekly cognitive-behavioral therapy (CBT) over 4 months. She initially struggles to engage with psychotherapy, and cancels or reschedules nearly half her appointments, but she also recognizes the value of the skills she learns to identify and manage her stress before it builds to the point of a psychogenic attack. She begins to recognize the sadness and fear she still experiences because of the abuse she experienced and develops skills to manage these emotions.

The PNES gradually decrease and finally stop entirely. Her depressive symptoms also improve significantly with venlafaxine and CBT. Janice remains PNES-free and participates in psychotherapy every 2 weeks. She begins working outside the home for the first time in 4 years as a volunteer in an animal shelter.

Overview of the disorder

DSM-5 categorizes PNES as a functional neurological disorder or conversion disorder with seizures. In contrast to other functional neurological disorders, such as functional movement disorders and psychogenic paralysis, PNES are transient and paroxysmal, often triggered by a stressor. The majority of patients have a history of emotional, physical, or sexual trauma, and 94% have one or more psychiatric comorbidities including (in order of decreasing frequency) depression, anxiety, PTSD, and personality disorders.1 Other medically unexplained symptoms such as fibromyalgia, chronic fatigue syndrome, and irritable bowel syndrome are also disproportionately common among patients with PNES, and measures of alexithymia are elevated.

Unlike factitious disorder and malingering, patients with PNES and other functional neurological disorders do not consciously produce symptoms and may experience symptoms even when there is no possibility of primary or secondary gain.

Early structural and functional magnetic resonance imaging (MRI) studies suggest that there are both structural and functional differences between the brains of patients with PNES and the brains of healthy controls.2,3 However the detected differences vary somewhat between studies, suggesting possible heterogeneity in underlying neuropathological correlates, and are not yet validated for diagnosing individual patients in a clinical setting.

PNES cause significant suffering and disability, with worse health care related quality of life than that associated with epileptic seizures. Most patients with undiagnosed and/or untreated PNES continue to have seizures and remain on disability. The majority of patients with PNES are misdiagnosed with epilepsy and are treated with at least one anti-seizure medication before the correct diagnosis is made.

Unlike epileptic seizures that are caused by abnormal hypersynchronized electrical discharges in the cortex of the brain, PNES are not associated with abnormal neuronal discharges. This means that PNES do not benefit from anti-seizure medications, and that they can be readily distinguished from most epileptic seizures by evaluation of brain activity during a typical event with an EEG. Fully a quarter of civilians and veterans evaluated for putative epilepsy in epilepsy monitoring units ultimately receive a diagnosis of PNES.4 The average time from the onset of symptoms to the correct diagnosis is several years. Unfortunately a prolonged delay to diagnosis is a prognostic marker for poor treatment outcome.

The gold standard for diagnosis of PNES entails capture of all habitual episode types on vEEG, with normal brain activity before, during, and following the event as well as semiology (signs and symptoms) consistent with PNES.5 While vEEG capture of all typical events is necessary to make a diagnosis of PNES, the diagnosis may be made with lower levels of certainty as possible or probable PNES based on interictal EEGs and verbal descriptions or video recordings of typical seizures (Table).

In some cases, where typical attacks occur rarely (less than once per 2 weeks), it may be impossible to capture events on vEEG, and a diagnosis of probable PNES made with smartphone video recordings of seizures may be the next best alternative. A promising alternative for such cases may be surface electromyelography, which can be employed for weeks or months at a time and may be able to reliably distinguish PNES from epileptic seizures in the near future.

Once the diagnosis of PNES is made, psychotherapy is the treatment of choice. Many approaches have been attempted to treat PNES, including brief interpersonal psychodynamic psychotherapy, acceptance and commitment therapy, mindfulness-based therapy, hypnosis, and psychosocial education. However, studies either did not compare treatment outcomes to those of a control group or were underpowered to demonstrate efficacy among patients with PNES.

There is a growing body of evidence, including two small randomized trials, demonstrating that weekly CBT informed regimens are effective in reducing PNES frequency and improving quality of life. The first trial, undertaken by Goldstein and colleagues,6 draws primarily on standard CBT principles and techniques. The second, undertaken by LaFrance and colleagues,7 is more eclectic. It incorporates psychoeducation, mindfulness, and interpersonal therapy theory and techniques into the CBT.

For both 12-session regimens, the primary goal of treatment is to reduce the frequency of psychogenic attacks. Both modalities teach patients to identify their environmental, physical, and emotional triggers and to use various relaxation and cognitive techniques to prevent negative thought patterns from progressing to psychogenic attacks.

The model used by LaFrance and colleagues includes additional sessions that identify motivations for behavior change and teach communication and conflict resolution skills. A session on medication management is also included.

SSRIs have not shown a consistent benefit for PNES. Psychopharmacologic therapy is therefore recommended for treatment of psychiatric comorbidities but not for PNES itself. Rapid titration off all anti-seizure medications under vEEG monitoring at the time of diagnosis has been shown to result in improved seizure frequency and a greater internal locus of control for patients.

While vEEG has become increasingly widespread, and awareness of the disorder is increasing, the majority of patients still do not receive a prompt diagnosis and evidence-based treatment. Obstacles to care include limited access to vEEG monitoring, stigma from clinicians and the public, a lack of training for clinicians, a shortage of behavioral health specialists, restrictions on driving, and poor communication between the neurologists who diagnose PNES and behavioral health specialists who provide treatment.

Even in circumstances where these systemic obstacles are successfully addressed, patient ambivalence about the condition and treatment can result in the majority of patients dropping out of treatment. Treatment nonadherence results in worse outcomes. Interventions such as motivational interviewing and improved communication between specialists can help to improve patient adherence with psychotherapy as well as treatment outcomes.

Direct verbal communication between neurologists and behavioral health specialists can be helpful in clarifying the diagnosis of PNES and aiding in diagnosing new somatic symptoms that frequently arise during the stresses of psychotherapy. It is essential that neurologists, psychiatrists, and other clinicians coordinate care to ensure that patients with PNES receive a prompt diagnosis and referral to psychotherapy.