The emergence of epigenetic models has generated a surge of optimism, opening new possibilities for psychiatric intervention. 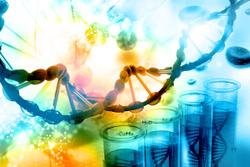 Since its birth in the early 19th century, psychiatry has sought to ground its diagnoses in the same mechanistic explanatory models that were emerging as hallmarks of the other branches of modern medicine.1 Drawing on the nascent fields of genetics and Darwinian evolution, psychiatry entered a debate over the origins of human behavior: nature vs nurture? As the debate raged on, studies of human traits and behavior were co-opted by promoters of nefarious political agendas, with scientists at the center of numerous atrocities throughout the 20th century.2 For all their harms, genetic determinist models, which explained human variation purely in terms of nature (ie, genetics), bore disappointingly little fruit.3 Social reductionist models, which explained human variation purely in terms of environmental factors, fared no better. Neither model could account for the pronounced changes in behavior and gene expression in response to events experienced over the course of an individual’s lifetime. Nor could they explain how such changes, conferring either vulnerability or resilience in the face of trauma, could be passed between generations.

By the mid-20th century, the burgeoning field of epigenetics had begun to bridge the divide between genetics and developmental biology,4 and, by the start of the 21st century, scientists increasingly turned to epigenetic approaches to disentangle the molecular mechanisms by which genes give rise to specific phenotypes; determine how the expression of genes could be modulated by stochastic factors; and establish how such modulations can be passed to offspring. Across fields of medicine, researchers today strive to elucidate the mechanisms by which adverse life experiences shape the development of disease and devise novel therapeutic interventions to supplant currently inadequate treatment and prevention paradigms. Nowhere is this work more necessary than in psychiatry, where diagnoses continue to elude biological definition and where remedies are frequently inadequate to address widespread suffering.

Because the models employed by researchers and clinicians in the study and treatment of disease shape patients’ understanding of their own suffering, the dominance of reductionist models can leave both patients and clinicians feeling powerless in the fight against fate, whether inscribed by circumstance or biology. The emergence of epigenetic models has generated a surge of optimism, opening new possibilities for psychiatric intervention.

The Rise of Epigenetics in Psychiatry

The term epigenetics was coined in 1942 (prior to the discovery of the molecular basis of heredity) by developmental biologist C. H. Waddington, ScD, as a neologism combining epigenesis (embryonic development) and genetics.5 Waddington described epigenetics as “the branch of biology which studies the causal interaction between genes and their products [that] brings the phenotype into being”; this definition is broader than the one in use today.6 In the time since the identification of DNA as carrier of the genetic code, the definition of epigenetics has narrowed to refer specifically to heritable alterations in gene expression that do not involve direct changes in DNA sequence.

In the mid-1970s, investigators identified the first molecular mechanisms that might explain how patterns of gene expression could vary so dramatically among an individual’s different cell types, all of which contain the same set of chromosomes.5 In 1975, Arthur D. Riggs, PhD, Robin Holliday, PhD, and John E. Pugh proposed a molecular mechanism for this differential gene expression: Covalent addition of methyl groups at specific DNA sites sterically inhibit the docking of transcriptional machinery at those sites.4 DNA methylation was thus deemed an epigenetic marker of gene inactivation.

In the 1980s, Michael Grunstein, PhD, demonstrated that the covalent modification of histone proteins was also a critical mechanism of gene regulation. Adding chemical groups (eg, methyl, acetyl) to histones adjusts how tightly DNA wraps around them to form chromatin, which thereby changes the accessibility of that DNA to transcriptional machinery.7 Subsequent work demonstrated additional epigenetic regulatory mechanisms of chromatin remodeling (eg, nucleosome sliding). Notably, epigenetic markers and mechanisms were shown to be heritable, not only clonally (ie, between generations of mature cell populations within an individual), but also between generations of individuals, passed from parent to offspring.8

Although epigenetics would eventually be applied to study psychiatric illnesses in the search for so-called missing heritability, the observation that chronic mental states and/or behaviors can be passed down through generations had occurred decades earlier. Among the first to consider epigenetics in the context of psychiatry was psychoanalyst and developmental psychologist Erik Erikson.9 In his 1950 book Childhood and Society, Erikson articulated his theory of “ego epigenesis.” Borrowing the term epigenesis from the field of developmental biology, he described a staged model of individual identity (ego) formation analogous to that of embryonic development in utero. Erikson wrote that identity arose through an individual’s resolution of a predetermined series of conflicts and asserted that an individual’s specific resolution to these conflicts was shaped by both innate biological factors and environmental inputs. His version of epigenetics focused on psychosocial processes rather than biological mechanisms, and it suggested psychoanalysis as a primary intervention.

Epigenetics was first introduced into the field of psychiatric genetics by Irving Gottesman, PhD, and James Shields in their 1982 book Schizophrenia: The Epigenetic Puzzle.8 Gottesman and Shields argued that the development of schizophrenia depended upon both genes and the environment. Thus, the task at hand was to elucidate the mechanisms through which environmental and genetic factors interact to produce psychosis. Despite the immediate popularity of the book, the application of epigenetic approaches to psychiatry did not take off in earnest for another 2 decades.10 In the June 2000 edition of Nature, Gottesman and colleagues penned an editorial bemoaning their field’s failure to investigate “[t]he roles for epigenetic factors in psychiatric disorders...in a systematic way” and imploring fellow researchers to consider an epigenetic basis for “nonorganic brain” disorders (ie, those for which no clear physiological or genetic lesion could be found).10 Subsequent commentators noted that epigenetic models could better account for the clinical presentation of psychiatric diagnoses than genetic models based solely on variation in nucleic acid sequence.8 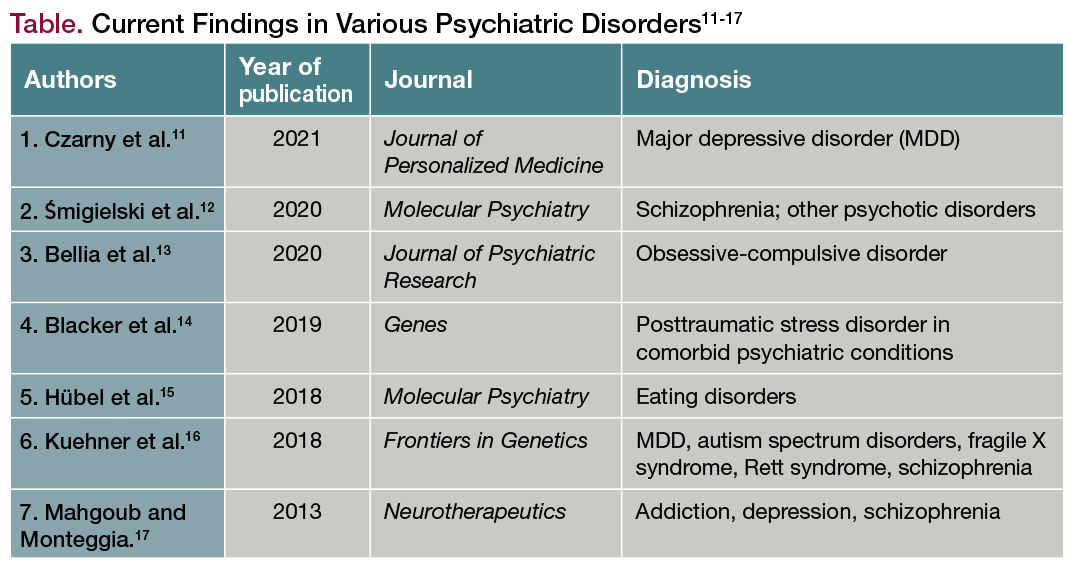 To separate cause from effect, researchers are developing animal models of epigenetic alterations. Michael Meaney, PhD, et al laid the foundation with their establishment of a rodent model of epigenetic transmission.8 Building upon studies in the late 1960s, Meaney demonstrated that variations in maternal care in rats could elicit specific behavioral and endocrine responses to stress in offspring, and that those responses could be passed from one generation to the next via nongenomic mechanisms.18,19 Ongoing efforts are aimed at linking findings in animal stress response models to the changes observed in patients in response to adverse events.

The Future of Psychiatric Epigenetics

Given the proliferation of studies, there could be pressure on this emerging science to identify a single physiological cause of challenging psychiatric disorders and to produce a biologic cure for them. However, we caution against this line of thinking. Without careful consideration, applications of epigenetic research are liable to fall prey to reductionism, thereby replicating the mistakes of previous models. Nonetheless, the evidence that our behavioral responses to trauma can be understood in part through epigenetics has the potential to cause a conceptual shift in the treatment of psychiatric disorders.

Even if interventions based on epigenetic research are not imminent, we assert that epigenetics currently constitutes an invaluable clinical tool for improving care. In a historical moment in which physicochemical explanatory models enjoy unprecedented cultural cachet, epigenetics can empower patients through biomedical recognition of the importance of their lived experiences, and the role they have in shaping the course of illness. Epigenetics might allow patients to shed the stigma and internalized shame of psychiatric illness and thereby better engage with existent therapeutic paradigms.

Patients are often blamed, and blame themselves, not only for the onset of mental illness, but also for their apparent inability to overcome it.20 Possible epigenetic factors might explain why traditional treatment strategies are not working (eg, why a patient may still be depressed even though they are on an antidepressant; why a patient’s delusional beliefs persist despite antipsychotic medication). A more complicated picture of the factors contributing to the development and perpetuation of a disorder may alleviate some of the guilt patients frequently describe about being unable to improve.

Furthermore, epigenetic models illustrate how psychiatric illnesses emerge as the result of many cumulative processes. Such nuanced understanding may allow for greater patience and more realistic expectations on the part of patients, their family members, and clinicians about the expediency and results of treatment. Treatment can be understood as a process that takes time, as one would not expect gene expression to be modified in a day. Epigenetics may also allow clinicians to recognize and operationalize a more holistic view of patients, considering both their deficits and their unique strengths in managing their struggles. Accounting for patients’ family histories of risk and resilience, and their environment and environmental responses, could widen the discussion and reveal new opportunities for intervention.

We see the field of epigenetics as an opportunity to harness both nature and nurture to improve mental health care. However, we argue that this knowledge, including the possibility of modifying gene expression, should not lead to the expectation or goal of eliminating suffering, nor to perfecting or standardizing our response to it. Our hope is that knowledge and application of the science of epigenetics can result in an increased understanding and compassion for the complexity of what it means to be human.1