This article describes common misconceptions about treatment of psychiatric illness during pregnancy and advocates for a logical and thoughtful approach to designing a treatment plan. 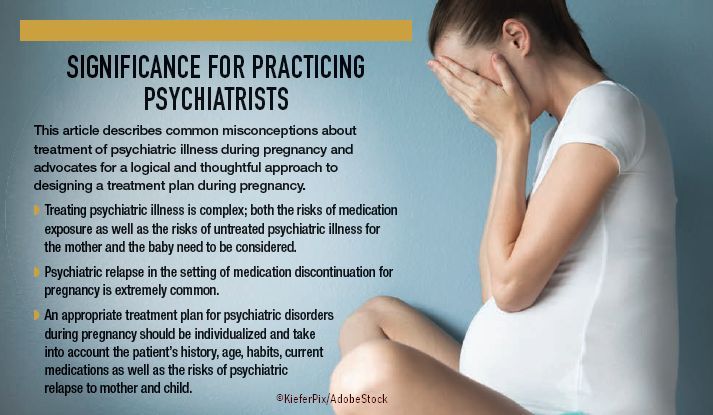 A 37-year-old woman with a history of recurrent major depression is currently stable on vortioxetine, a newer antidepressant. “Lauren” asks for advice regarding psychiatric medication use during pregnancy. She has a history of being nonresponse to classic selective serotonin reuptake inhibitor medications and two psychiatric hospitalizations, one of which was after a serious suicide attempt. How should her psychiatrist advise her?

Managing psychiatric disorders in the setting of pregnancy is confusing and complex; complicating matters is a large amount of conflicting literature that is difficult to absorb, interpret, and use for best practices. Those of us who have specialized in perinatal psychiatry have spent a large amount of time thinking about the best approaches to designing treatment plans for pregnant patients. This article discusses a few common errors in the management of the perinatal psychiatric population (Table).

Psychiatric illness (especially depression) during pregnancy has been associated with multiple negative outcomes for the exposed baby, including preterm delivery, low birth weight, decreased motor tone and activity in the baby, higher cortisol levels in the baby, poor reflexes in the baby as well as overall worse health status and increased risk for preeclampsia and gestational diabetes. The negative effects of postpartum depression on exposed babies include lower IQ, slower language development, and higher rates of attention deficit-hyperativity disorder as well as behavior problems and psychiatric illness.

Exposure to maternal psychiatric illness either during pregnancy and/or during the postpartum period can lead to undesirable and negative outcomes for the exposed child. These risks should not be forgotten when considering whether to continue a psychiatric medication during pregnancy.

In general, perinatal psychiatrists recommend using older medications that we know more about in pregnancy rather than newer ones about which we know little to nothing in pregnancy. This rule of thumb applies to treatment planning before pregnancy. Once a woman is pregnant, the infant is already exposed to the newer medication and switching risks relapse of the illness as well as exposure to the second medication. So, if you are going to make change, do so before pregnancy.

Switching prior to pregnancy

It often makes sense to try to “clean up” a medication regimen and switch to medications with more data prior to pregnancy. However, when a woman is older, her risk of genetic malformations increases with each passing year. In the spirit of treating the whole patient, taking time to change a medication regimen and risk relapse and spend time finding a medication regimen that is helpful may not make sense. In this setting, the provider does best to educate the patient about this risk to make sure she makes an informed decision about her treatment options.

Many clinicians get nervous about benzodiazepine use in pregnancy and, particularly in the setting of an unplanned pregnancy, will refuse to prescribe benzodiazepines when a woman finds herself pregnant. However, sudden discontinuation of benzodiazepines can precipitate withdrawal symptoms including unstable changes in blood pressure and heart rate, and can result in seizures, none of which are particularly good for the patient, her baby, or the pregnancy.

Attempting to taper and minimize the regular use of benzodiazepines during pregnancy is a more reasonable approach that supports the health of both mother and baby. Tapering of benzodiazepines can be accomplished by switching to a longer-acting agent followed by a taper of 20% every 24 hours in the setting of a motivated patient and good supports. Many patients will require a slower taper and can be decreased every 3 to 7 days.4

I have evaluated a number of patients concerned about their psychiatric medications in pregnancy yet they continue to smoke tobacco, drink alcohol, use marijuana, or take opiates. It is important to address these known risk factors for negative pregnancy outcomes and emphasize that these substances have very clear risks if continued during pregnancy. In comparison, most (but not all) psychiatric medications do not.

I have evaluated a number of patients in which appropriate treatment has been withheld because the patient was pregnant. Providers have the good intention of not exposing the baby to psychiatric medications; however, they neglect the very real risk of exposure to psychiatric illness and unhealthy and unpredictable maternal behaviors. Furthermore, there are very few medical illnesses for which we withhold treatment during pregnancy and psychiatric illness should not be an exception.

Unfortunately, lithium use during pregnancy has a very bad reputation because of early studies that found an increased rate of Ebstein anomaly in in utero exposed infants. However, more recent data reveal that the risk of Ebstein anomaly in exposed infants is less than 1%, while the risk of relapse of bipolar I disorder with discontinuation of lithium during pregnancy is approximately 85% to 100%.2,3,5

The negative effects of postpartum depression on exposed babies include lower IQ, slower language development, and higher rates of attention deficit-hyperativity disorder as well as behavior problems and psychiatric illness.

Lithium use during breast-feeding remains controversial. Although it can be supported in some individual cases, it is not recommended in patients who are disorganized or unlikely to recognize dehydration in an infant.6

To be clear, I am not recommending that valproic acid or carbamazepine not be prescribed to women who may become pregnant. I am, however, recommending that contingency plans be in place when these medications are prescribed in women because neither should be used in pregnancy except in exceptional circumstances. If valproic acid or carbamazepine are to be used in a woman who has the potential to become pregnant, it is important that she clearly understands that she should not take these medications during pregnancy and that any pregnancy should be a planned one, and other medications will be used during pregnancy.

Discussion of contraception choices should be carried out and initiation of contraception should be encouraged and if possible undertaken. In addition, the association between valproic acid exposure and the development of polycyctic ovarian syndrome as well as the potential for decreased fertility should be discussed with the patient.

In general, I recommend prescribing valproic acid and carbamazepine in women of reproductive age only when other, safer medication choices for pregnancy such as lithium or atypical antipsychotics have failed.

Let’s return to the clinical case described at the beginning of this article. What are some appropriate treatment options for Lauren during pregnancy?

She has a history of severe illness requiring hospitalization, a history of a significant suicide attempt, and a history of non-response to SSRI medications. She is, however, on a newer antidepressant about which we know little during pregnancy.

One option is to attempt to switch her to an older medication about which we know more, as long as it is not an SSRI since she has a history of nonresponse.

Finally, let’s revisit her case with the added detail that Lauren is, in fact ,currently pregnant. Does this change recommendations? Absolutely. If Lauren is already pregnant, it does not make sense to switch to an older medication because the developing baby is already exposed to the medication and switching increases the risk of relapse and exposing the baby not only to the original antidepressant but also a second medication. In this case, it would be better to continue with a medication known to work for Lauren and try to minimize the number of exposures for the baby.

There are no easy answers in designing a psychiatric medication plan for pregnancy, but a calm, thoughtful approach can help us promote maternal mental health which is not only good for the mother, but also for her baby. 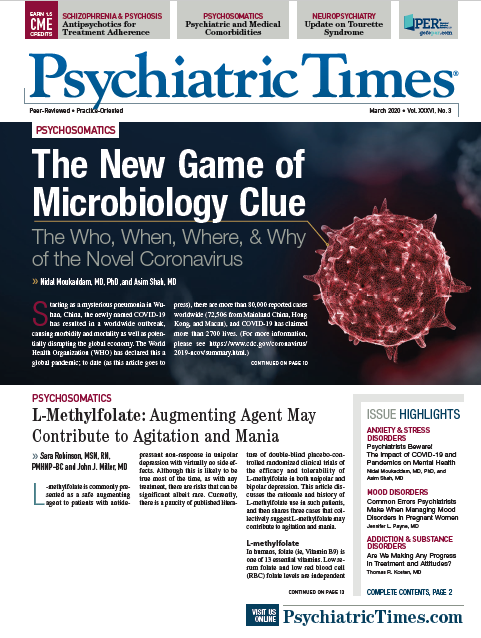