Why can’t humans get along? An expert explores the biological underpinnings of our dualistic thinking.

Why can’t humans get along? It seems we always need to pick 1 side of the fence or the other from which to argue. Us or them, Republican or Democrat, Christian or Muslim, Jew or gentile, nature or nurture, black or white, mind or body—and on and on. Philosophers have recognized our dualistic nature for thousands of years. How did we come to be so polarized when it often serves us much better to dwell somewhere in between, in the gray areas?

As it turns out, we humans can be forgiven for our dualistic thinking. This tendency to pick sides is ancient and embedded in our biology. Knowing that our dualistic thinking is the product of evolution will not resolve our political and scientific arguments, but understanding the origins of it might at least allow for compassion for the other side.

In the beginning, humans evolved from the most primitive animals, which were simply multicellular feeding tubes with only 2 behavioral choices: approach or avoid. The choice was based on 2 sensory perceptions: safety and danger. Fast forward a few billion years, several million species, and trillions of generations, and the basic blueprint remains the same. Even with the staggering array of evolutionary diversity in the animal kingdom, the fundamental behavior of all creatures involves toggling between approach for sustenance, reproduction, and avoidance of danger for survival.

Looking through the lens of comparative anatomy and physiology, humans have distinguished themselves from other animals in a few ways. One is the nearly malignant growth in size and complexity of the cerebral cortex in comparison with other species. The cortex has evolved to allow for abstraction, self-reflection, and imagination, which are hard to find in other animals, although they may exist.

The other distinction of humans is the sophistication of the social engagement system (SES), including unique elements of the vagal nerve complex and the parasympathetic cranial nerves that have worked together to evolve our impressive human social and cultural structures.1

The SNS is designed for fight or flight, or response to danger. The PNS is responsible for restoration, digestion, socialization, and reproduction. The 2 subsystems of the ANS are nearly mutually exclusive. If 1 is activated, the other is inhibited and turned off. This dynamic blueprint of the ANS is the fundamental basis of sensory and behavioral responses to signals of danger and safety in the environment.

Drilling down further to neuroendocrine systems such as the hypothalamic-pituitary-adrenal (HPA) axis, we can see how danger sensory signals are fast-tracked from the thalamus (our sensory way station) to the amygdala (our emergency response center) and cross-checked by the nearby hippocampus (our memory contextualizer); cortisol-releasing hormone (CRH) is then sent from the hypothalamus to prompt the release of the queen of stress hormones, cortisol, from the adrenal glands.

At the same time, when the amygdala recognizes danger, it activates the SNS and shuts down the PNS. It also causes the release of vasopressin (VP) from the hypothalamus and epinephrine from the adrenal glands to support defensive survival behaviors.

When the danger has passed and the thalamus starts receiving safety signals, the PNS is activated, the SNS shuts down, CRH release ceases, cortisol levels fall, the hippocampus settles the amygdala down, and restorative processes begin. As the PNS takes control, vagal tone causes heart rate and blood pressure to drop, digestion begins, the social engagement system can activate, and anabolic and prosocial hormones such as neuropeptide Y and oxytocin and even sex hormones are released from the hypothalamus. The HPA axis toggles from a response to danger to a state of safety, restoration, and reproduction.

The neurobiological foundations of our stubborn dualism exist even at the molecular level. Consider how γ-aminobutyric acid and glutamate serve as the most widespread inhibitory and excitatory neurotransmitters in the brain, and toggle back and forth with a single enzymatic transformation, resulting in calm or agitation. Likewise, consider the powerful inverse relationship of the structurally similar molecules of dopamine and serotonin, with excesses of each resulting in depressed levels of the other, and having opposite effects on resting-state neural networks in the brain. 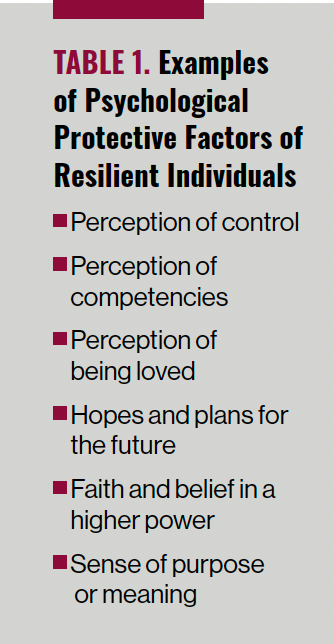 Backtracking briefly to vasopressin and oxytocin, it is telling that they differ by only 1 amino acid, yet AVP is a defensive stress hormone associated with aggression, whereas OT is a prosocial hormone associated with maternal love, caring, and sexuality.2 These ubiquitous chemical-toggling relationships nearly condemn us to our insistent either-or state of being. 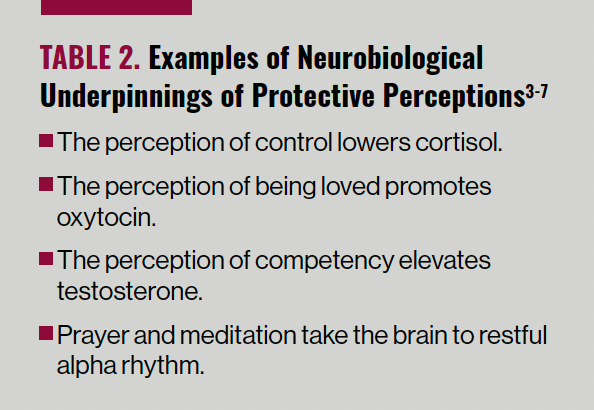 If there is any hope, it may lie in the human capacity of the cerebral cortex for abstraction and imagination. Many of the psychological protective factors of resilient individuals are simply perceptions and mindsets. Some examples are listed in Table 1. As with all products of the mind, these protective perceptions have neurobiological underpinnings (Table 2).3-7 Resilient individuals can call on these cortical abstractions to deal with adversity and toggle back to the PNS and a perception of safety.

Using our capacity for imagination, imagine if our brains allowed us to live in the middle, between us and them, and that we could understand nuance and gray areas. If we acknowledge and understand the origins of our dualistic neurobiological constraints, we can generate compassion for the human condition, arriving at the point of acceptance that Buddha did. Only then will we be able imagine the truth that lies somewhere in between, and the truth shall set us free.

Dr Vance is associate professor of psychiatry and behavioral medicine at Virginia Tech Carilion School of Medicine in Roanoke, Virginia.

4. Bollini AM, Walker EF, Hamann S, Kestler L. The influence of perceived control and locus of control on the cortisol and subjective responses to stress. Biol Psychol. 2004;67(3):245-260.