I was ready. In my mind I rehearsed agreeable sermons about diet, exercise, and MMR vaccines I’d use to shepherd my courteous new patients to wellness. It’s like I wanted to replace my memories of psychiatric patients with the most wholesome medical facts. 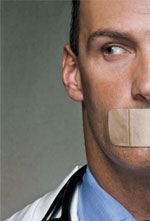 The man in the plastic chair was thickset, in his early 30s. His thinning black hair was lacquered against a pale moon face. A dagger was tattooed on one arm. He slurped apple juice from a baby-sized carton through a straw. Someone had draped a floral-pattern hospital gown around his neck like an afterthought.

His mother was there, leaning against the wall of the small room. She had read about bipolar disorder on the Internet. “He definetely has that,” shesaid. She described her son’s angry spells and how he loafed around her house a lot. She had an overbearing demeanor. “What he has,” I thought, “is an addiction to cough medicine.”

“What’s your disability?” I asked him. If I had said, “What are you on disability for?” he would have felt judged by all of society. He might have become irate.

I was an intern, and it was December. By now I had a repertoire of queries I used to get people to cough up information. Each day, the police on their crime patrol collected psychotic people from the streets and delivered them to our emergency department, paranoid and disheveled, like a crop of dolphins being set free from a tuna net. I had to ask if they “got messages from the TV” or “heard voices,” without further agitating them.

Overnight, the city’s ruffians straggled in. Some sought Lortab or Xanax, others a place to hide out. A few came in search of the proverbial hospital-issued free ham sandwich. No one ever seemed to request a turkey sandwich or aspirin. One day a very corpulent man came in. He was hungry, he said. I tried to elicit a history, but all he would reveal was that he was a tremendous fan of Jane Fonda, all the way back to Barefoot in the Park, and did I share this interest? With patients such as this, I collected a fastidious criminal history. I tread delicately over past convictions and sentences, as politely as a first-class passenger on the Queen Mary, admiring the china service. Then I’d get to my point: “How did your robbery victims feel? Mean to animals as a child?”

Maybe that’s the art part of psychiatry, which, like all medical specialties, we are taught, is “both an art and a science.” Or, in the words of my friend Daniel, a physicist in Geneva who programs a supercollider to smash subatomic particles together, measures the resulting fragments, and publishes all this in articles that contain a great many Greek symbols, medicine is all art. Although as art goes, it’s no Mona Lisa. It’s more geared for one of those Thomas Kinkade, Painter of Light franchises found in suburban malls. There are times when I’m aware that it could be improved.

“Did you work in the past?”

“I worked at Wal-Mart. Why do you ask so many questions?”

It was the stories that originally drew me to the field of psychiatry. In medical school, I took a course in which a group of students inter-viewed psychiatric inpatients. Our first patient was a weathered Puerto Rican man. He rambled on about a collection-paint cans, Kennedy era magazines, a broken fan-that he had rescued from the dumpsters of Paramus, NJ. Our attending explained that he was “tangential.” His landlord had evicted him.

Later, during my surgery clerkship, a man presented with a hip injury. While loping across Queens Boulevard in the dark, he had been struck by a lumbering Lincoln Continental. What saved his life, by preventing a more serious injury and subsequent deadly pulmonary embolism that is the end point of so many pelvic fractures, was a 40-oz can of beer lurking in his side pocket. Right then I knew I would go into surgery or psychiatry. Forget the cheeriness of obstetrics, the crunchy granola goodness of family practice. My choice was simplified a few weeks later when I saw an exhausted surgery intern crumble as the chief screamed at him on rounds for misquoting a patient’s bilirubin. “40?!” You could hear it down the hall.

But halfway through intern year, I was tiring of the drugs, the malingering, the joblessness, and the rudeness I kept encountering. Intrusive family members were getting on my nerves. By January, as my switchover to required internal medicine and neurology rotations loomed, I was ready. In my mind I rehearsed agreeable sermons about diet, exercise, and MMR vaccines I’d use to shepherd my courteous new patients to wellness. I stuffed my white coat pockets with miniature primers on orthopedic maladies and infectious diseases. I read up on shoulder dislocation and the plagues of the preantibiotic era. It’s like I wanted to replace my memories of psychiatric patients with the most wholesome medical facts. If a typhoid epidemic had visited our hospital, I would have been prepared.

In February, a man was admitted to internal medicine with pneumonia. His workup portended lung cancer-a stubborn pleural effusion, a persistent hyponatremia, 50 years of Pall Malls. I often lingered in his room, auscultating his lungs, measuring chest tube drainage, reminding him to drink less juice. He always joked that he was going to escape our clutches. One day, between crackling breaths, something compelled him to unleash a torrent of Korean War anecdotes and anticommunist beliefs. “I don’t believe in handouts,” he said.

The man smoked even while hospitalized and evaded all attempts to limit his fluid intake. Yet he was charming. I thought about his wife and kids and wished he would choose the chemotherapy. And I agreed with him-I didn’t believe in handouts.

But wait? Didn’t I become a doctor to help others? What happened to the caring platitudes about “making health care a right” and “helping the underserved” that I had recited at my medical school interviews? Those interviews seemed like a lifetime ago. When did I turn into Ebenezer Scrooge?

I’m in my third year now. No ghost of patients past has visited. I never saw the man with the Robitussin addiction again. But others like him have appeared, usually during the dead of night on call. I find I’m bothered less this year. Maybe I’ve gotten used to it-not to the crime or drugs or unemployment, but to people’s basic differences. Recently I asked a patient about his tattoos. He was demanding Xanax for his “panic attacks,” which lasted “hours,” and wouldn’t leave without it. Explaining his tattoos, on one arm, he told me, was a Norse god, and on the other, a skull. “Wow, that’s interesting,” I thought. Then, as he opened his ham sandwich, we moved on to how I could help him.

Articles in this issue
Psychiatric Issues in Hoarding
Psychotherapy Research
Of Two Minds
From Cinderella to Straw Man?
How Psychotherapy Changes the Brain
The Person of the Psychotherapist: Let’s Hear Not the Song but the Singer
Becoming a Mensch: Timeless Talmudic Ethics for Everyone
The Intern
Problems of Overdiagnosis and Overprescribing in ADHD
"Morality” Professor Responsible for Research Misconduct Resigns
Blood Tests for Diagnosis of Schizophrenia and Depression?
Robin in the Tanglewood Rafters
Related Videos
Related Content