My Wow and Awesome Responses While Reading the Psychiatric Literature

Reflections on the current psychiatric literature as well as the many accomplishments psychiatry has seen since the 1950s.

I thoroughly enjoyed reading this month’s cover story by Jerald Kay, MD, and Joel Yager MD, in which they share their assessment of the state of the vast psychiatric literature that regularly bombards us clinicians. The authors reflect on how journal publications have become less relevant to them as clinicians over the decades and describe 2 visceral responses—Duh and Yawn—when reading current journal articles. Overall I agree with their assessment, and I encourage reading their delightful article.

Nonetheless, the scientist in me scowled at a few of their opinions. So, I thought it would be worthwhile to travel down a few side roads to share my reflections on the current psychiatric literature as well as the many accomplishments psychiatry has seen since the 1950s. Although I tend to agree with their statement that much of the current publications in psychiatric journals are either redundant with little new information (their Duh response) or overly technical to the point of being a remedy for insomnia (their Yawn response), I aimed to get some perspective.

After logging into PubMed, I entered the following search terms, applied the “limit to articles published in the past 5 years” filter, and I was actually not surprised by the results:

It would be naïve and foolish of me to consider reading even 1% of these articles, and I am in full agreement that the vast majority of them would illicit either a Duh or Yawn response. However, every month I find at least 20 or more papers from which I learn something. Every psychiatrist—clinician, academician, researcher, consultant, or some combination thereof—has a unique interest and specialty in our vast and diverse field of psychiatry. Sometimes I find an obscurely titled article from a not-so-famous journal that becomes one of my favorite articles of the month; I would never have stumbled upon such gems without a strategy to enrich the pool of articles that I take the time to read. For each psychiatrist, that strategy will be different, but such a method to whittle down the literature can make the process somewhat of an adventure—often rewarded with a much-appreciated article.

I was also intrigued by the article’s comparison of new pharmacological treatments since 1950 in cardiology (the article’s reference noted 14) versus psychiatry (3 according to the article).1 The reference, it turns out, was an excellent TED talk from which I learned a lot. However, the source of the cardiac versus depression/schizophrenia new treatments was a graph without a published source reference. The presenter showed a slide titled: “Development of New Treatments for Mental Illnesses Compared with Heart Disease,” with the Y axis labeled “# of Mechanistically Distinct Drugs.” The X axis showed bar graphs of “Distinct Drugs” that existed in the 1950s compared to those available today for depression, schizophrenia, and heart disease. The reference for the slide was “Courtesy of: Bill Carlezon and Ed Skolnick.” This is a case where context is critical.

Comparing a pump—which has been exhaustively studied and is extremely well understood—with the human brain—which is the seat of human consciousness, allowing me to write this editorial while simultaneously and automatically managing all of my bodily functions, allowing for emotional responses, and containing the circuitry of language, culture, ethics, and morality—is like comparing our understanding of a meteor with that of a black hole.

As psychiatrists, we should be so lucky that the anatomy and functionality of the brain is the same as the heart. Comparing a pump—which has been exhaustively studied and is extremely well understood—with the human brain—which is the seat of human consciousness, allowing me to write this editorial while simultaneously and automatically managing all of my bodily functions, allowing for emotional responses, and containing the circuitry of language, culture, ethics, and morality—is like comparing our understanding of a meteor with that of a black hole. We find ourselves empathizing with Isaac Newton’s famous quote 2:

I do not know what I may appear to the world, but to myself I seem to have been only like a boy playing on the seashore, and diverting myself in now and then finding a smoother pebble or a prettier shell than ordinary, whilst the great ocean of truth lay all undiscovered before me.

Despite this limited understanding of the human brain, I find it remarkable that we have made so much progress since the 1950s. It was in 1954 that we began using chlorpromazine, our first antipsychotic, and in 1958 and 1959 we started using our first 2 antidepressants, iproniazid and imipramine, respectively. As a psychopharmacologist who relishes understanding psychotropics and their putative mechanisms of action, I continue to be amazed by how much we have learned about pharmacology and the brain since I began medical school in 1982. Although the mechanisms of action of current US Food and Drug Administration-approved drugs for the treatment of depression are limited to 4 neurotransmitter systems (eg, serotonin, norepinephrine, dopamine, and glutamate), the diverse subcomponents of these 4 systems targeted by FDA-approved antidepressants is vast. When you add to this the drugs that we use “off label,” the list of mechanisms of action expands greatly.

In the past 35 years, our portfolio of new pharmacological agents in psychiatry has grown tremendously, providing patients with many new options. Although we certainly have mountains of new information and understanding to explore and it is common to hear frustration regarding the lack of novel breakthroughs in psychiatry, it is important to consider our significant advances (Table).

Table. Drugs with novel mechanisms since 1985

Sadly, there are challenges in developing novel agents for the many—arguably all psychiatric diagnoses—that have either no or sub-optimal current FDA-approved treatments. As such, the pharmaceutical industry has virtually abandoned new drug development in neuroscience with a few exceptions.

Remarkably, it was a publication in Scientific American by Francis Crick3 in 1954 that first suggested that “DNA alone, free of protein, may be able to carry genetic information.” In a mere 46 years, the world scientific community announced the completion of the first map of the entire human genome, and by 2003 they completed the sequencing of all 3 billion base pairs. This remarkable accomplishment paved the way to identify the polymorphic families of genes that code for receptors for a particular neurotransmitter. Today, just for the neurotransmitter serotonin, we have characterized in detail 7 different families of serotonin receptors and approximately 18 different subfamilies—all with unique and divergent roles in our brain’s neurocircuitry. Many of our newer antidepressants and antipsychotics have unique molecular binding affinities at these 18 different targets for serotonin, which I would argue are structurally and functionally different medications.

Pharmacogenomics is in its infancy, with only 4 evidence-based genes in the psychiatrists’ clinical toolbox (ie, CYP2D6, CYP2C19, HLA-B* 15:02, and HLA-A*31:01).4 Over the next 10 to 20 years, we will likely see a continued expansion of psychiatric pharmacogenomics that will include an array of clinically relevant genes for receptors, cytochrome P450 enzymes, uridine 5’-diphosphate glucuronosyltransferases (UGT) enzymes, promoter sequence variations, and more.

In parallel to this genetic research is the increasing understanding of the complexities of the human genome. We are learning that many psychiatric disorders can have a synergistic risk or protection for unmasking based on the contributions of numerous genes, often across many different chromosomes. In the case of the approximately 100 genes with varying degrees of risk for (or protection from) the development of schizophrenia, there is one of these genes on almost all the 23 different human chromosomes. Additionally, genome-wide association studies have shown that regions of DNA which contain an increased risk for schizophrenia also contain regions of DNA that increases the risk of metabolic disorders.

As a first-year medical student in 1982, I recall seeing my very first human CT scan—the chest, abdomen, and brain. I was blown away by the detail, and I continue to be amazed by the clinical information that can be extracted by the now numerous neuroimaging tools available: computed tomography (CT) or computed axial tomography (CAT), positron emission tomography (PET), magnetic resonance imaging (MRI), functional MRIs, functional ultrasound imaging, single-photon emission computed tomography, magnetoencephalography, and others. I have treated patients for whom these techniques have been a primary source of information in differential diagnosis and treatment planning.

In 2011, the FDA approved the imaging agent DaTscan in conjunction with SPECT to determine the density of dopamine transporters to aid in the diagnosis of Parkinson disease. More recently, in May 2020 the FDA-approved Tauvid, an imaging agent used with PET scanning to evaluate patients for Alzheimer disease. This agent is approved for adults with cognitive impairment to quantify the density and location of aggregated tau neurofibrillary tangles to assist in the differential diagnosis of possible Alzheimer. The future of neuroimaging looks very bright!

In this editorial, my goal was to provide a “glass half full” assessment of where we are in psychiatry and the importance of a vast psychiatric literature that can elicit the Duh and Yawn responses.

The fascinating history of medicine, which rests on the shoulders of the giants in science, has shown us that we can never predict what obscure research observation or serendipitous finding will open a door to advancements in medicine. For this reason, I am happy to tolerate articles that elicit the Duh and Yawn responses, knowing that somewhere tucked in that vast ocean of publications, I will continue to stumble upon articles that elicit Wow and Awesome responses.

3. Crick FHC. The structure of the hereditary material. Scientific American. 1954. 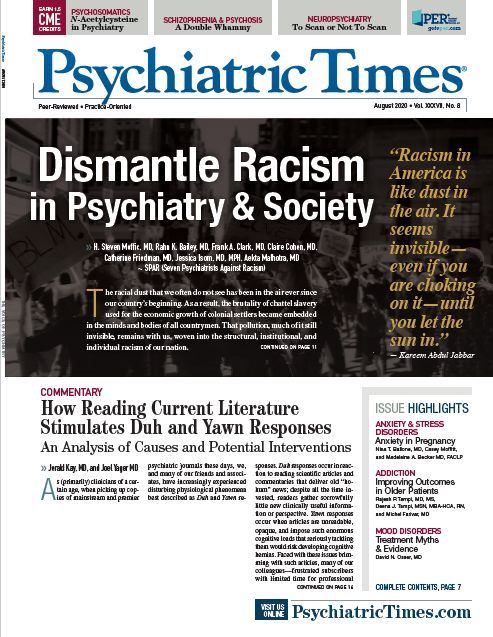 Suicidal Ideation and Behaviors in Oncology Patients
Looking to the Future and Improving Patient Care
Case-Based Clinical Approaches for Clinicians
Finding Meaning in the Face of Suffering
To Scan or Not to Scan: Brain Imaging in First-Episode Psychosis
ACP Releases Ethical Guidance for Electronic Communication With Patients
Cytochrome P450: You've Come a Long Way
A Challenging Psychotherapeutic Journey
Conventional and Integrative Approaches to Treating Anxiety in Pregnancy
A Double Whammy: Psychosis and Huntington Disease
Exploring N-Acetylcysteine in Psychiatry
Topiramate in Bipolar Disorder and Comorbidities: The Myths and the Evidence
Dismantle Racism in Psychiatry & Society
My Wow and Awesome Responses While Reading the Psychiatric Literature
The Glass Is Half Full
Related Videos
Related Content