Here: devastating short- and long-term behavioral and physiological effects of methamphetamine neurotoxicity and the implications for treatment. 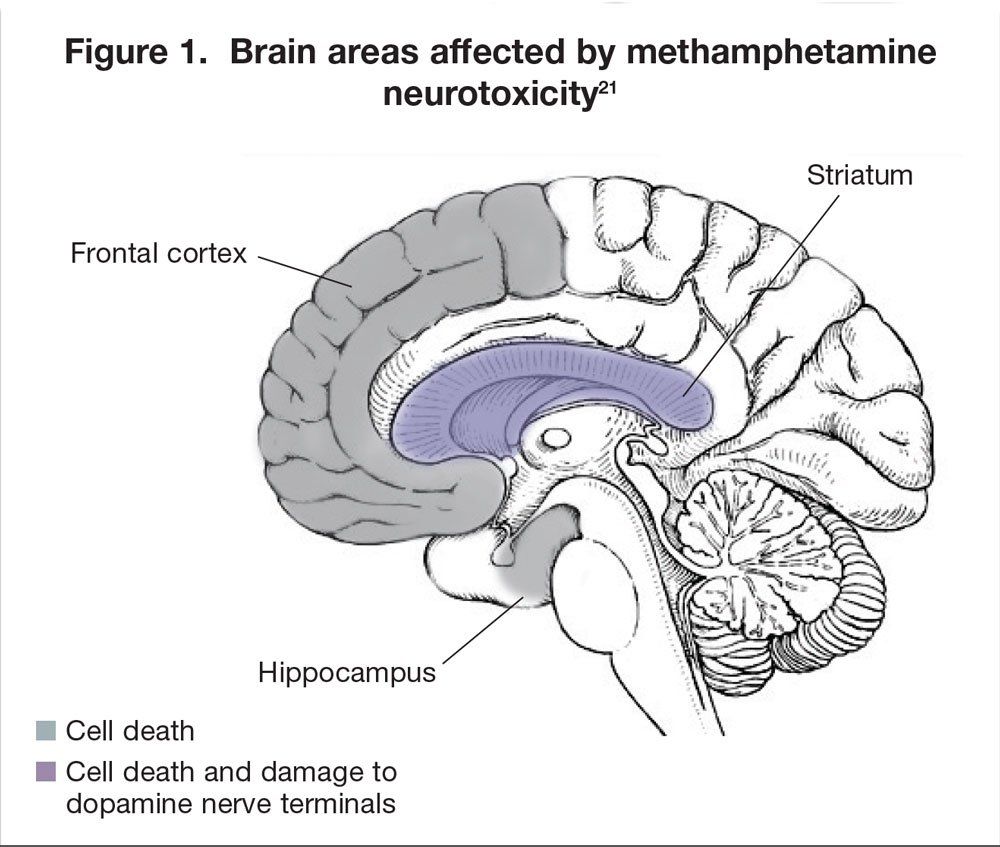 Significance for the Practicing Psychiatrist 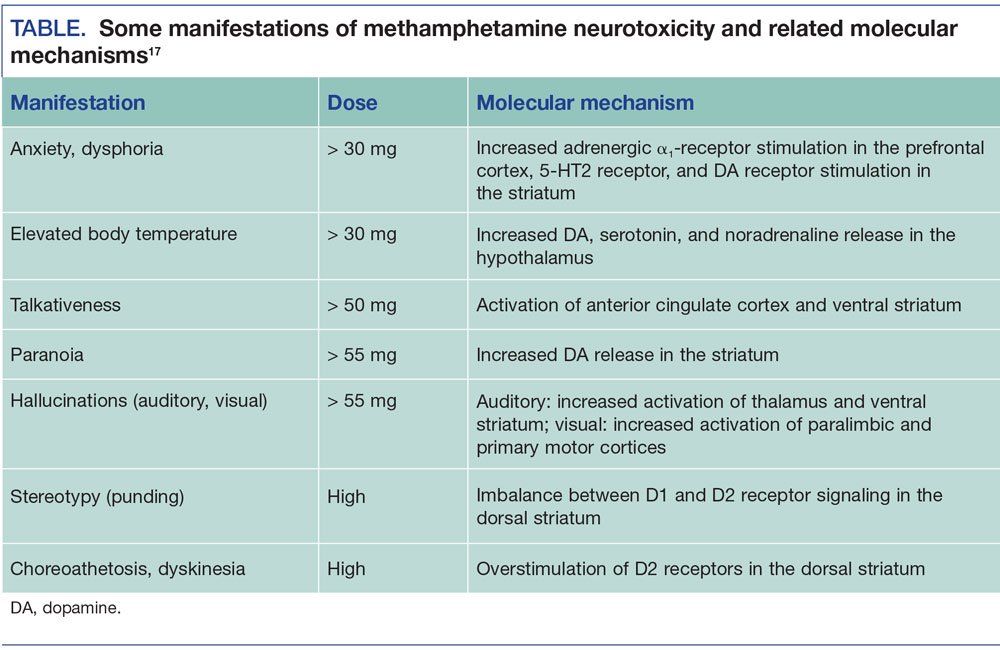 TABLE. Some manifestations of methamphetamine neurotoxicity and related molecular mechanisms 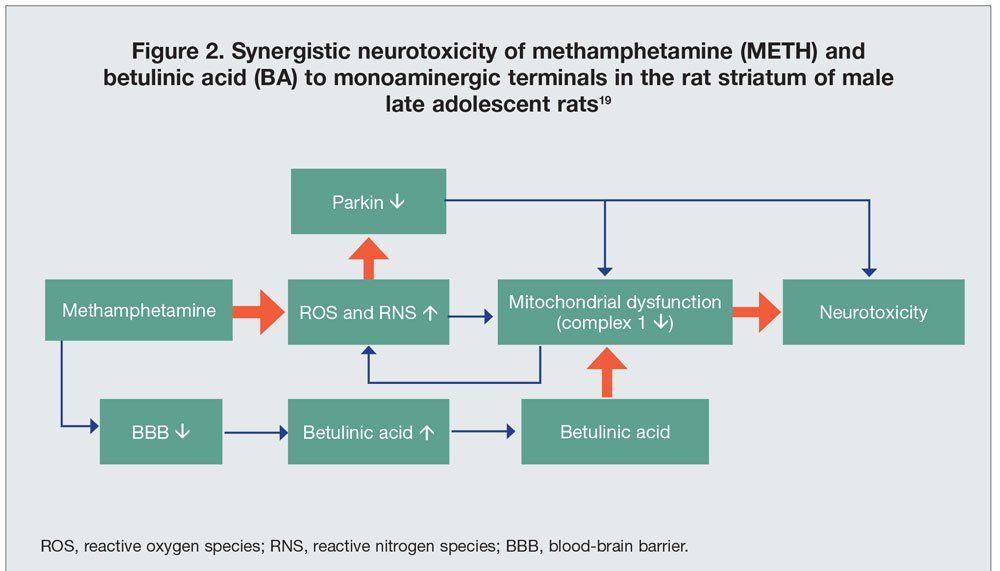 Methamphetamine is a CNS stimulant, and its chronic abuse continues to be a significant problem in the US and worldwide. Powerfully addictive, it has devastating effects on health and other aspects of life. It is a schedule II drug, which can be prescribed only for ADHD, extreme obesity, and narcolepsy. Amphetamine is more often prescribed for these conditions because of its approximately 2-fold lower reinforcing potential.

Although amphetamine is less potent than methamphetamine, it can also be neurotoxic when taken at high doses and has the same molecular mechanisms of action as methamphetamine. The mechanisms underlying neurotoxicity are complex, and they ultimately lead to severe dysfunction of dopaminergic and serotonergic neurotransmission. Short of abstinence, there is no treatment for the neurologic complications associated with chronic methamphetamine use.

Understanding the relationship between the molecular mechanisms underlying the neurotoxicity of methamphetamine and related clinical manifestations is imperative to provide more effective treatments for methamphetamine users.

Methamphetamine is an indirectly acting sympathomimetic amine. It releases dopamine (DA), serotonin, noradrenaline, and adrenaline from nerve terminals, thus increasing their neurotransmission. As a result of its high lipophilicity, methamphetamine easily crosses the blood-brain barrier.

The net result of the actions of methamphetamine is overstimulation of the monoaminergic pathways in the central and peripheral nervous systems. Higher doses trigger an increase in glutamate in the striatum, which results in excitotoxicity. Methamphetamine interacts with presynaptic DA receptors by competitive antagonism and has minimal effect as an agonist at postsynaptic DA receptors but activates them indirectly via released DA. In addition to damaging dopaminergic and serotonergic terminals, methamphetamine damages neurons in some brain areas (Figure 1).

Medical use of methamphetamine

Amphetamines are prescribed for ADHD, narcolepsy, and severe obesity. Their therapeutic doses range from 5 to 60 mg daily (usually in divided doses). The d-enantiomer has stronger CNS effects, but it is metabolized quicker than the l-enantiomer, which is longer lasting. Better clinical response was seen in children with ADHD who were treated with drugs that contain both enantiomers.1 The initial strong central effect comes from the d-enantiomer, while elongation of the effect is provided by the l-enantiomer. This allows less frequent dosing than a medication containing d-amphetamine only. The maximum therapeutic dose of d-amphetamine and d-methamphetamine is 60 mg daily. However, adverse effects such as insomnia, loss of appetite, and anxiety have occurred with therapeutic doses of amphetamine.2

DA and serotonin pathways regulate a variety of functions and behaviors. Consequently, the repeated release of these monoamines in the CNS (after a methamphetamine binge or chronic abuse of high-dose methamphetamine) is responsible for several neurological problems in methamphetamine users. Short-term behavioral effects of methamphetamine and amphetamine include euphoria, “rush,” alertness, wakefulness, anti-fatigue effect, increased confidence, hyperactivity, and loss of appetite. Higher doses also cause talkativeness, aggressiveness, restlessness, and repetitive behavior.

Very high doses of methamphetamine will trigger some or all of the following symptoms: agitation, confusion, anxiety, irritability, dysphoria, violent behavior, impairment of psychomotor and cognitive skills, stereotypy (punding), auditory hallucinations, panic, formication (delusions of parasites or insects on the skin), and paranoia. During the end stage of the methamphetamine binge, known as “tweaking,” euphoria is gradually replaced by negative feelings (anxiety, feeling of emptiness) and most or all of the symptoms described above. The crash phase follows and is characterized by intense fatigue, uncontrollable sleepiness, and catnapping.

Medically prescribed doses of methamphetamine have some of the adverse effects described above (eg, dysphoria, insomnia, tremors) and can lead to drug addiction. Even the lowest dose (5 mg; 0.06 to 0.08 mg/kg) can result in positive drug effects.

Chronic methamphetamine abuse, particularly at high doses, has a variety of cardiovascular, gastrointestinal, and neurological physiological effects, which include cerebral vasculitis as well as intracerebral, subarachnoid, or intracranial hemorrhage. Behavioral consequences of chronic use include dependence, cognitive impairment, anxiety or depression, violent behavior, insomnia, stereotypy, and psychosis. Cognitive impairments, disturbed sleep or insomnia, depression, and anxiety as well as intense drug craving are the most prominent symptoms of withdrawal; depression and anxiety can lead to suicidal thoughts. In addition, chronic methamphetamine users may be at higher risk for Parkinson disease than non-users because of the toxic effects of the drug in the nigro­striatal DA pathway.

Methamphetamine neurotoxicity in the CNS

There are numerous manifestations of methamphetamine neurotoxicity in the CNS, including psychomotor impairments as well as mental illnesses. The most common cognitive impairments with chronic use are those of episodic memory, executive function, language skills, visuoconstructional abilities, and information processing. Chronic users also display impairments in fine motor skills.

Motor deficits in methamphetamine users typically do not involve alterations in gross motor skills; however, impaired gait and increased risk of Parkinson disease have been reported.8 Other motor impairments include stereotypic behavior, choreoathetoid movements, and dyskinesias that in some cases can persist for a long time after the cessation of methamphetamine use. Anxiety, depression, and psychosis can also persist after cessation of chronic use. Psychosis develops more readily in drug users who take methamphetamine in high doses and for long periods. Moreover, use may trigger underlying psychosis or schizophrenia. In fact, the symptoms of methamphetamine-induced psychosis are similar to those observed in patients with schizophrenia.9,10 Of note, formication is one of the manifestations of methamphetamine-induced paranoia.

In animal models, methamphetamine neurotoxicity manifests with persistent (long-lasting after drug cessation) reductions in dopaminergic and serotonergic markers, morphological and structural abnormalities, apoptosis, and inflammatory response (microglia activation and gliosis). Other neurons, including glutamatergic, GABAergic, and cholinergic, can also be dysregulated by methamphetamine.

Symptoms can be triggered by acute or chronic methamphetamine administration, binge use, or withdrawal from the drug. When patients with acute symptoms of neurotoxicity present to the emergency department, they are often agitated, violent, combative, and psychotic-and sometimes require physical restraints. These patients can be treated with sedative hypnotics and antipsychotics. Persistent psychosis, anxiety, and depression in current or abstinent methamphetamine users can be treated with antipsychotic, antidepressant, and antianxiety medications. Stereotypic and choreoathetoid movements might be prevented with atypical antipsychotics and haloperidol, respectively.

Methamphetamine is frequently combined with other drugs, including alcohol, marijuana, narcotic analgesics, other stimulants, and depressants. Therefore, it is often difficult to separate the impact of one from another. Logan17 reviewed several studies on the effects of amphetamines coadministered with other drugs. In general, depressants negate the stimulant effect of amphetamines; however, the impairing effects of the drugs would most often be additive.

There is no effective pharmacological treatment for methamphetamine dependence, short of prolonged abstinence, although some drug candidates against methamphetamine addiction are in clinical trials. Currently, standard therapies aimed to combat dependence on the drug include cognitive-behavioral therapies and contingency management interventions, support groups, and step-treatment programs.18

Dr. Moszczynska is Associate Professor, College of Pharmacy and Health Sciences, Wayne State University, Detroit, MI. She reports no conflicts of interest concerning the subject matter of this article.