The Influence of Diet on ADHD

There is good emerging evidence that aspects of diet can indeed affect ADHD. Clinical recommendations here. 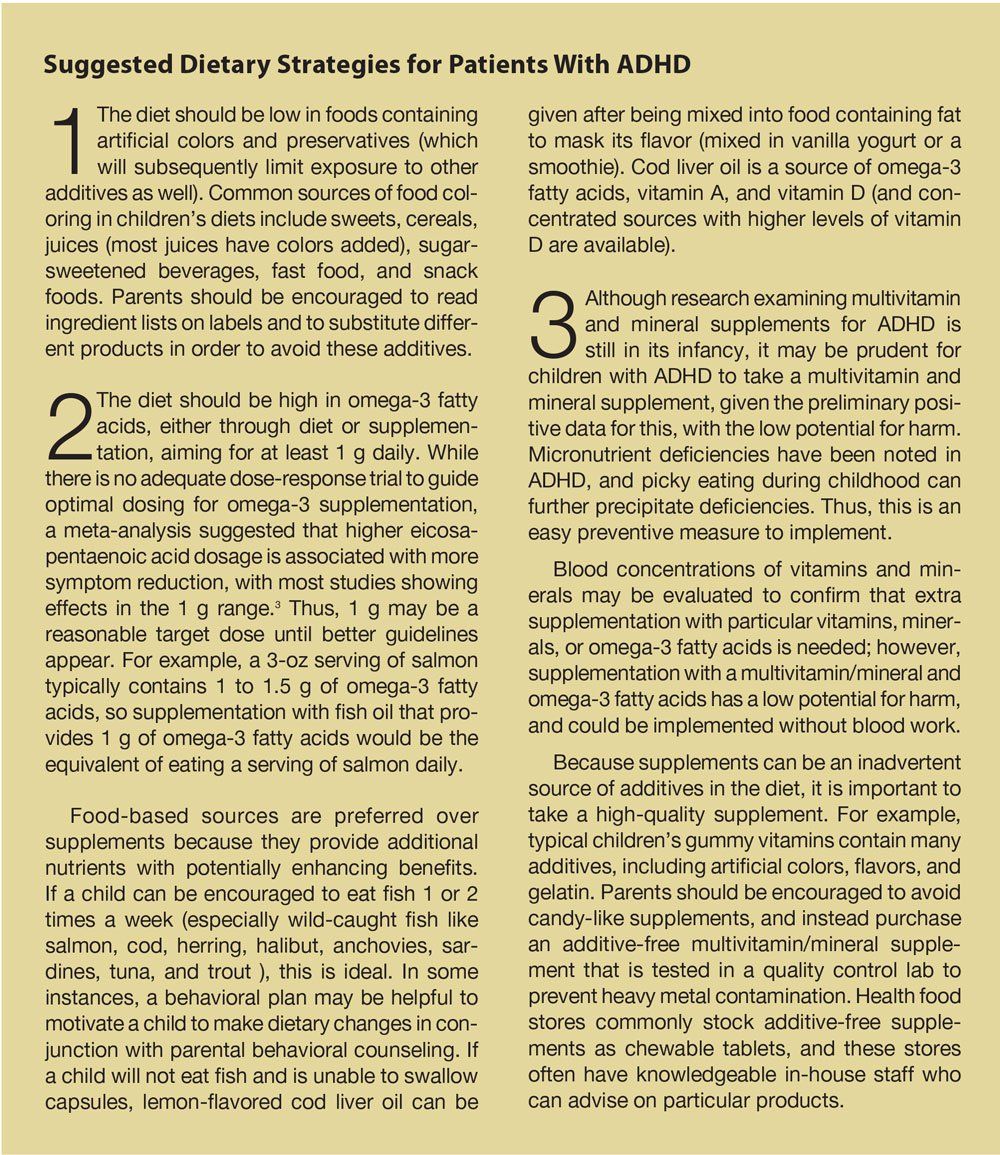 For years, clinicians have suspected that diet may affect ADHD symptoms, and in recent years, research has suggested a potential impact of various aspects of diet on ADHD. This research includes examining the use of elimination diets, as well as studying the effects of omega-3 fatty acids and micronutrients on the disorder. Our knowledge in this area has begun to coalesce, and new directions have been illuminated.

One of the most heavily speculated about and long-studied research areas in ADHD and nutrition is the use of elimination diets. While they come in many forms, in general, elimination diets are used to test whether the removal of specific dietary components leads to improvement in ADHD symptoms. In a second phase, elimination diets can be followed by dietary challenges, in which the food items being tested are given to patients, to observe whether symptoms return on reintroduction.

Mechanisms may reflect food allergies (immune-mediated reactions) and/or food sensitivities (nonimmunological reactions), but to date no laboratory tests have succeeded in predicting dietary response in youth with ADHD. Nonetheless, evidence of the past few years has consistently shown that restriction/elimination diets may be effective in reducing the ADHD symptoms, with up to a 30% probability of response.1 This effect size likely masks wide variation in response, with some children responding more beneficially than others.

Artificial food coloring and preservatives have been the primary foci of food sensitivity in children with ADHD. A recent meta-analysis concluded that there is enough evidence to suggest that artificial coloring can be a trigger for some patients, with a modest effect of g = 0.29, although with a fairly wide confidence interval because of the small size of the studies that have been reported.2 Thus, it may be that for some youths, a diet free of processed foods containing additives, particularly colorings and preservatives, would improve symptoms. Processed foods are major sources of artificial colors, especially in children’s foods and drinks, in which bright colors are used to make food more attractive.

Although recent literature reviews have concluded that omega-3 fatty acid supplementation is an effective treatment (category 5) and dietary restriction is a probably effective (category 4) intervention, no dietary changes are currently recognized in formal clinical guidelines for ADHD treatment. Thus, these remain options for complementary or alternative treatments.

Case-control studies using dietary pattern analyses also support this idea, as individual studies suggest that diets high in cold-water fatty fish and low in processed food are associated with a reduced risk of ADHD.6-8 While these types of studies remain too few to determine whether the effect size can be increased, this is an important direction. Clinically, we can note that wild-caught cold-water fish (generally, more so than farm-raised fish) provides not only high levels of omega-3 fatty acids and vitamin D, but also other essential vitamins and minerals. In parallel, low intake of processed food and artificially colored beverages also limits food additive exposure. Although given considerably less attention than clinical trials to date, dietary pattern analysis may add very important information on potential combined effects of dietary strategies and should be taken into consideration when future studies are designed.

The best established evidence to date indicates that the severity of ADHD symptoms may be reduced by a combination of supplementation with omega-3 fatty acids combined with reducing or removing processed foods, especially those high in food colors and preservatives. It is important to note that smaller fish (eg, sardines) that are lower on the food chain and that have been caught in the wild are better choices. Such fish are high in omega-3 fatty acids but also limit excess exposure to environmental toxicants, including mercury, lead, cadmium, and arsenic. If tuna is preferred, buying the chunk light version will help limit mercury exposure. If parents are still worried, lab-certified low-mercury cod liver oil or fish oil capsules may be a reassuring option. The Natural Resources Defense Council also offers a handy pocket-sized reference for buying fish that are lowest in mercury and other contaminants (

Multiple micronutrients have been studied for their role in ADHD. Lower circulating concentrations of vitamin D and higher rates of vitamin D deficiency/insufficiency are found among children with ADHD compared with controls.9-11 However, despite evidence for the significant role of vitamin D in brain development and function, circulating concentrations of vitamin D do not appear to be causally related to ADHD.12 It remains to be seen whether vitamin D supplementation may help prevent ADHD symptom occurrence through interaction with other dietary nutrients. It is also possible that vitamin D could affect other associated features of ADHD, such as cognitive or emotional functioning.

Low circulating concentrations of iron, magnesium, and zinc have all been associated with ADHD.7,13,14 Case-control studies that examined dietary patterns also suggest benefit from a diet high in minerals and protein (an important source of some minerals), with a 47% reduced risk of ADHD in those who consumed diets high in minerals and protein.7 Interestingly, higher dietary iron intake may partially protect against effects of low-level lead exposure, an environmental contaminant associated with ADHD.15,16 (See also the article by Joel Nigg, PhD). It remains unclear whether supplementation is beneficial in the absence of low circulating concentrations of these minerals, and studies are too few to provide robust meta-analyses. Nonetheless, consideration of blood levels of these minerals may be prudent in cases of ADHD, especially if dietary insufficiency is suspected.

However, supplementation with single minerals has shown very modest effects on ADHD symptoms. An alternative for families who cannot manage a change to a whole-food healthy diet is supplementation with comprehensive multivitamin/mineral supplements. Preliminary studies that used relatively high dosages (under the upper limit, but much higher than the estimated average requirement) have been encouraging and suggest a promising new direction worth monitoring.17,18

A restriction/elimination diet may be helpful for some children with ADHD. From the current data, we estimate a 25% to 30% chance of noticeable improvement on a diet that restricts consumption of food additives. Implementing this approach requires effort and commitment and is best undertaken by the whole family, not merely the child with ADHD. Parents would begin by reading all ingredient labels on food packaging, and replacing foods that contain additives. Ideally, consumed food will contain a short list of easy-to-read, recognizable ingredients. In general, a varied, whole-food, minimally processed diet found mostly in the perimeter of the grocery store is best.

As mentioned earlier, even children’s vitamins (as well as children’s medications) can be a source of additives. Juice drinks are also a major source of food coloring exposure, so these drinks should be substituted with 100% orange juice (one of the few juices that does not contain additives and has options fortified with calcium and/or vitamin D). In general, this type of diet emphasizes whole, simple foods like fruits, vegetables, beans, rice, fish/chicken/meat, and simpler treats like plain chocolate or homemade baked goods and reduces or eliminates the consumption of sweets and processed foods. It is recommended that the family strictly adhere to this diet for 1 month while systematically monitoring the child’s symptoms to test for improvement.

This approach requires the child to consume only a few low-allergy foods, and if allergy symptoms improve, then each food is added back to the diet one at a time to test for an allergic response. Note that this type of diet removes all food additives as well and thus is likely to show benefit if a child has a sensitivity to additives; yet, by no means is this level of food restriction necessary to test for additive sensitivity. Because so many foods are eliminated, this type of diet can be dangerous and requires supervision by a licensed dietitian to avoid nutrient deficiencies.

There is good emerging evidence that aspects of diet can indeed affect ADHD. It is likely that multiple factors may be at play in regards to environmental exposures and ADHD, and dietary exposure effects may be multifactorial as well. Recommendations that combine what is known about diet and ADHD deserve renewed consideration.

Dr. Holton is Assistant Professor, Department of Health Studies, Center for Behavioral Neuroscience, American University, Washington, DC. Dr. Johnstone is a Postdoctoral Fellow in Neurology and a Psychology Resident, Department of Child and Adolescent Psychiatry; Dr. Stadler is Associate Professor of Medicine and Director of the Graduate Programs in Human Nutrition; Dr. Nigg is Professor, Department of Psychiatry, Pediatrics, and Behavioral Neuroscience, Oregon Health and Science University, Portland, OR. The authors report no conflicts of interest concerning the subject matter of this article. Dr. Johnstone receives funding from NIH-NCCIM T32 AT002688.