On the Mark: Translating Biomarker Technology to Clinical Neurotoxicity

Recent research in neurotoxicology has underscored the importance of chemical exposures as facilitators of neurological dysfunction. 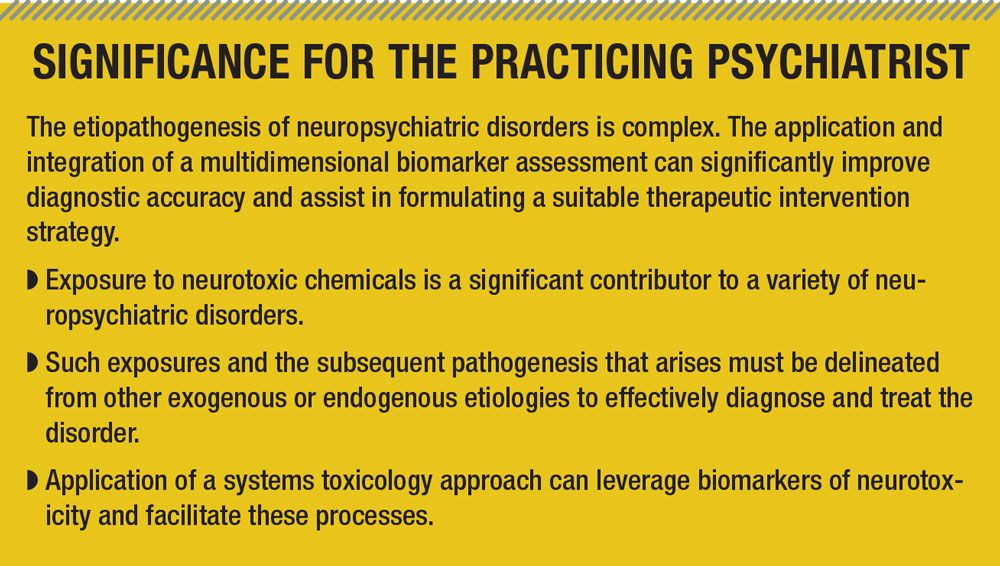 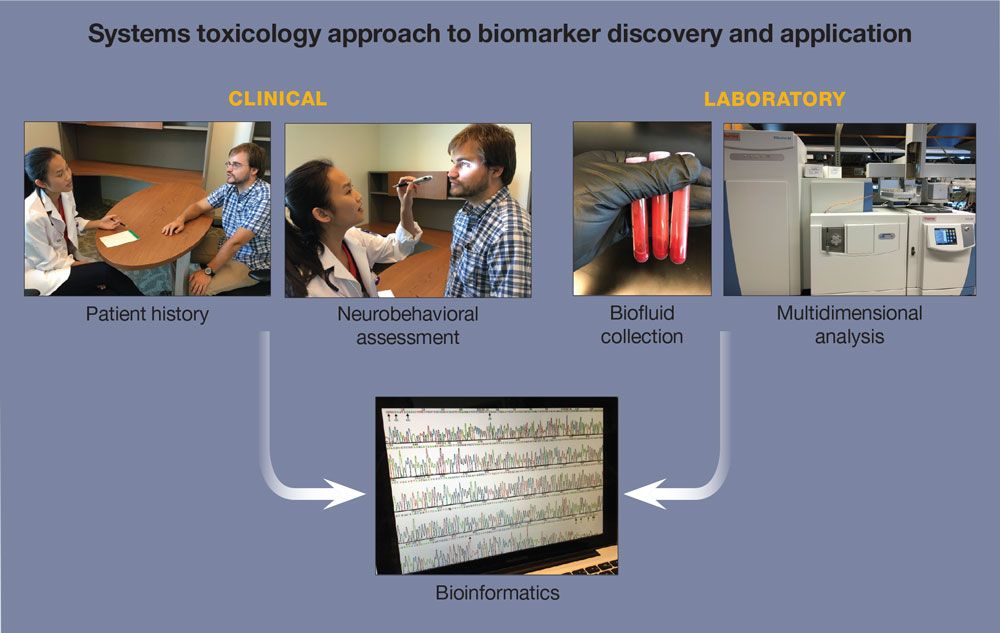 As our understanding of the cellular and molecular cascades that underlie many neurological diseases has vastly improved over the past several decades, our complementary study of the etiology of these diseases has revealed a complexity of risk factors that has proved difficult to disentangle. While genetics is still appreciated as a contributor, recent research in neurotoxicology has underscored the importance of chemical exposures as facilitators of neurological dysfunction.

Not surprisingly, the chemicals that receive the most attention are those we are routinely exposed to in our daily lives. The sources of these exposures are as varied as the chemicals themselves: pesticides on produce, flame-retardant compounds on furniture, metals in drinking water, and various chemicals used to manufacture consumer products that have simplified our lives.

While many of these chemicals have well-defined biological targets as a consequence of their utility (eg, pesticides), many other chemicals, such as bisphenol A and brominated flame retardants, were never manufactured or intended to target and disrupt biological systems. Yet, laboratory-based research has delineated the impact of these chemicals and highlighted several neurological targets that are disturbed. These findings are further supported through population-based studies that have established these chemicals as significant risk factors for neurological deficits.

While these exposures are usually thought of as occurring during adulthood, evidence points to prenatal and early postnatal periods as critical to brain development that can be upended by such chemical exposures.1,2 Indeed, recent findings indicate that exposure to environmental toxicants is a key risk factor for neurodevelopmental disorders, including ADHD and autism spectrum disorder (ASD).3,4 Moreover, these developmental exposures may initiate a pathological cascade that propagates over time and underlies some of the neurodegenerative or neurobehavioral disorders seen in adulthood.5 Although these findings have been supported by laboratory studies, such hypotheses require additional studies.

While the arduous task of characterizing neural targets affected by toxicants and their potential to alter neuronal function is ongoing, clinicians face an equally daunting challenge as they must determine whether a neurological impairment is the result of exposure to a toxicant or some other endogenous or exogenous factor. Beyond this initial diagnosis, they need to effectively monitor the progress of a neuro-toxicological deficit and evaluate the effectiveness of a treatment intervention.

Previously, clinicians relied on biomarkers of exposure isolated from blood or urine to determine biological levels of a toxicant or its metabolite and then coupled this information with a neurobehavioral examination to establish an association between toxicant exposure and neurological deficits. However, in many instances these associations are tenuous, and more sensitive and specific biomarkers are needed to diagnose, predict, and longitudinally evaluate a neurotoxicological event.

During the past several years, significant advances have been made to identify and characterize a variety of biomarkers that could be effectively used to delineate a neurotoxicological deficit in the clinical setting. Fluid-based biomarkers consisting of blood (plasma and serum), urine, or cerebrospinal fluid (CSF) tend to be the most accessible and have been adapted to a variety of biochemical assays aimed at interrogating neuronal dysfunction. In general, these assays have focused on alterations to axonal and dendritic integrity through the measurement of tau, alpha-synuclein, and microtubule- associated protein 27. In contrast, other assays have focused on measuring inflammation and oxidative stress using markers for glial fibrillary acidic protein (GFAP) as well as markers of oxidative stress.

While these biomarkers provide critical information regarding alterations in biological functions, there are several caveats that need to be considered. First, the use of peripheral fluids such as blood or urine poses the potential risk of detecting alterations in the periphery that are not related to alterations occurring in the CNS. In many instances, the deposition and biological impact of these chemicals is promiscuous, demonstrating minimal selectivity for a particular organ system. Thus, a change in biomarkers-especially markers of oxidative stress sampled from the blood or urine-may indicate a biological dysfunction in a peripheral organ system, such as the liver or kidneys, which makes it difficult to ascribe a change specific to CNS dysfunction.

CSF sampling circumvents many of these problems given its proximity to the brain and its role as sentry in maintaining a semi-selective separation between the CNS and the periphery. However, it is significantly more invasive than sampling from the periphery and comes with a host of caveats associated with sample collection and handling.

Although these markers may denote neurological dysfunction, they are not specific for neurotoxicity and in some instances lack the power to delineate specific neurological diseases. For example, alterations in tau and alpha-synuclein are associated with neuronal dysfunction seen in Alzheimer disease and Parkinson disease and may not delineate such diseases as arising from toxicant exposure.

Because elevations in oxidative stress and inflammation are hallmarks of neurological disease pathology, such biomarkers provide only a broad appreciation of neuropathology and are not selective for toxicant exposure or a specific neurological deficit. Thus, we may not be able to rely on a stand-alone endpoint to serve as a biomarker of neurotoxicity. Rather, we need to leverage several biomarkers to generate a clearer neurotoxicological landscape for particular chemicals or chemical classes.

Recent studies have sought to address some of the limitations of peripheral biomarkers by assembling panels of biomarkers isolated from serum or plasma following exposure to specific pesticides with distinct neurotoxic actions.6 Researchers used panels of cytokines, hormones, and metabolites to demonstrate distinct patterns of activation and suppression of these biomarkers, thus advancing our ability to delineate adverse outcomes.

Complementary to fluid-based biomarkers, neuroimaging markers have recently been used to address concerns of neurotoxicity. The benefit of neuroimaging biomarkers, compared with biofluids, is evident as current technologies allow for a more focused evaluation of neuronal integrity, function, and biochemical processes in the brain. Like blood and CSF, neuroimaging biomarkers assess alterations in inflammation and neuronal integrity as markers of neurotoxicity. Instead of measuring astrocytic activation via GFAP, imaging markers, such as translocator protein (TSPO), identify activation of microglia, the resident immune cells in the brain.7,8

The dopamine transporter (DAT) has been used extensively to document deficits in the striatal dopamine terminals. Because the DAT is localized and functions at the plasma membrane of the dopamine terminal, disruption in its expression has been implicated in a variety of neurological disorders that have perturbations in dopamine signaling as part of their pathology, including Parkinson disease, ADHD, ASD, and schizophrenia. DAT is especially vulnerable to neurotoxicant exposures and may serve as a precursor to subsequent damage to the dopamine neuron.9 Indeed, neuroimaging has identified reductions in the expression of DAT in the striatum of patients with preclinical Parkinson disease, which highlights its potential utility as a biomarker of neurotoxicity.10

While neuroimaging appears to circumvent some of the issues encountered with fluid-based approaches, particularly specificity for the brain, the ability of these biomarkers to truly delineate pathology attributed to neurotoxic exposure versus another exogenous or endogenous factor remains elusive. It may not be feasible to rely on a single neuroimaging biomarker to diagnose and monitor neurotoxicity. Rather, additional markers may need to be integrated to develop a clearer picture of the etiopathogenesis of the deficit.

From laboratory to clinical utility

Laboratory and clinical medicine are capable of merging their expertise to develop biomarker-based platforms to delineate the potential toxicological etiology of neurological deficits. Borrowing from the field of systems biology, systems toxicology provides an emerging and powerful approach to understanding the impact toxicant exposure has on the biological system, particularly the brain.

Systems toxicology leverages recent advances in a variety of disciplines, including genomics, proteomics, and metabolomics, to generate a multimodal dataset that seeks to address the complexity of the biological system and distill it to a manageable model. This model includes the following techniques:

Relying on biofluids such as blood and CSF, each of these techniques is capable of generating extensive datasets. As a result, a concomitant advancement in bioinformatics techniques has been necessitated to efficiently integrate these platforms in a format that can be used for clinical purposes.

Systems toxicology embraces the holistic understanding of toxicity, which allows a more detailed toxicological assessment to be integrated into the platform. Various toxicological datasets are coupled with biomarkers of exposure to identify and quantify chemical body burden. This model can be integrated into the clinical setting, in which a patient history that addresses possible occupational and household exposures can be coupled with an extensive neurobehavioral battery to further contextualize the biological analytes (Figure). Successful application of such a platform provides the clinician with an elaborate panel of diverse yet parallel biomarkers that address a patient’s neurological deficits, which allows for a significantly improved diagnosis and a clearer approach to disease management.

As a way to further illustrate the integration and translatability of this diagnostic platform, consider the application of a systems toxicology approach to the diagnosis and monitoring of ADHD in a clinical setting. ADHD is generally considered to be comprised of alterations in 3 neuropsychological domains, including hyperactivity, impulse control, and attention. The difficulty in diagnosing ADHD lies in its heterogeneity; it presents as a complex, multifactorial disorder, whose etiology and pathogenesis arise from the interaction of several different endogenous and exogenous risk factors.

Applying the systems toxicology model to ADHD, a clinician focuses on the patient’s exposure to chemicals that have been identified as risk factors for ADHD (eg, pyrethroid insecticides).11 Exposures are corroborated through urine analysis to determine the burden of these chemicals and their metabolites. Neurobehavioral deficits can then be evaluated using well-established neuropsychological endpoints related to impulsivity and attention.

Children with ADHD are at higher risk for other psychiatric disorders, including anxiety disorders and learning disabilities. Using the systems toxicology model, the clinician can further delineate the complexity of the deficits and evaluate them against the backdrop of additional biomarkers.

Although seemingly complex, a systems toxicology platform allows for significant advancements to be made in the clinical approach to ADHD. It improves the clinician’s ability to effectively diagnose the disorder and monitor its progression and response to therapeutic interventions.

The human brain is complex and continually refuses to be dissected by blunt probes. This fortitude demands an enlightened way of thinking to forge a new path forward to determine how the brain functions. The required tools have been laid before us in a multidisciplinary approach that coordinates the best of neurology, psychiatry, environmental health, and the biological sciences. Harnessing these approaches and focusing them toward neurotoxicity will allow us to reveal the dynamic nuances of environmental chemicals and their contribution to neurological disease.