One Friday in April: A Story of Suicide and Survival

One author shares his experience with suicidal, psychotic depression and the life events that he connects to its origins. 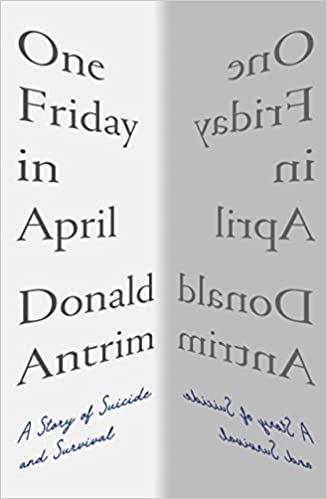 One Friday in April: A Story of Suicide and Survival by Donald Antrim

One Friday in April: A Story of Suicide and Survival

“It is a disease of the body and the brain, if you make that distinction—a disease that kills over time. My dying, my suicide, lasted years, through hospitalizations, through more than 50 rounds of electroconvulsive therapy—once known as shock therapy—through recovery, relapse, and recovery.”

The above quote is from One Friday in April: A Story of Suicide and Survival by Donald Antrim, the accomplished author of 3 books and several pieces published in The New Yorker, and the recipient of a MacArthur “Genius” Grant. One Friday in April is the story of his experience with a suicidal, psychotic depression and the life events that he connects to its origins.

Antrim’s prose is clear and powerful. He links his suffering to his upbringing and guilt over publishing his ambivalent feelings about his mother. The book begins with his describing his hours on the fourth-floor fire escape of his Brooklyn apartment, alternately holding on and letting go. Suicide for Antrim is not a choice or an act, but a state of being. He describes the phenomenology of his tortuous dysphoria in clear, meticulous, and melodious prose.

More than 20 years of therapy garnered Antrim considerable insight, but his underlying proclivity to self-reproach seemed intractable. He describes having been raised by alcoholic parents with a contentious relationship. His family moved regularly, as they followed his father to academic positions, and he was often sent to live with a grandmother.

The most pivotal event in Antrim’s life was the death of his mother and his subsequent book about her. Psychotic guilt over exposing her life consumes him, and his eventual hospitalization coincides with the book’s release. Previously, he impulsively insisted on seeing an orthopod on an emergency basis when he was convinced that his arms were displaced out of their sockets. Eventually, friends found him on his fire escape, and he began the inpatient stage of his journey.

Antrim eventually gets a bed on a research unit in the Psychiatric Institute (PI) at Columbia. The academic establishment of electroconvulsive therapy (ECT) in the United States began at Columbia under Lothar Kalinowski. In an ideal inpatient setting and after 8 weeks on nortriptyline with apparently PRN lorazepam, quetiapine, trazodone, and chloral hydrate, Antrim was unimproved—actually, he was worse. He was again delusional and insisted he had a physical ailment, not a psychiatric condition. A consultant found him to be in sound physical health. He was becoming unhinged, desperate, and irrational in spite of an optimal treatment environment. Antrim was lucky. Very lucky.

An ECT consultant, described as dressed in a Chanel suit, tells him in no uncertain terms that he needs ECT. As if through divine intervention, Antrim then received a phone call from the celebrated author, David Foster Wallace, who was a distant acquaintance and was told about Antrim’s situation by a mutual friend. Wallace told him that he, himself, had received ECT in the past and that if his doctors recommended ECT, he should have it. After 12 sessions, Antrim was discharged and apparently remitted.

Antrim provides an accurate summary of the ECT procedure. He summarizes, “The anesthetic goes in, blackness comes, and then, suddenly, as if nothing had taken place, the nurse’s voice asks, ‘Can you tell me where you are?’” He further describes ECT in a paragraph with enough detail that it would well serve a general psychiatrist considering referring a patient for an ECT evaluation.

Two years after his initial ECT recovery, Antrim goes against his psychiatrist’s advice and stops his antidepressant. Within a year, he has a recurrence and is again admitted to PI. This time the results of ECT are disappointing. He undergoes 37 sessions with minimal benefit.

Throughout the book, Antrim discusses his relationships, which were often successful but not necessarily long-term. The book ends with Antrim ensconced in a healthy marriage and a productive, euthymic state of mind. Antrim rightly emphasizes the importance of healthy relationships being necessary for mental health. Although when he was “in suicide,” as he would put it, he was impervious to relating.

His writing style is effective in relating to the reader, whether the reader is a fellow sufferer or someone interested in better grasping how depression can consume a person. Unanswerable is whether life experiences are the cause of depression or if, when in a depressed state, cognition is biased toward creating morbid explanations.

From my personal point of view, the audience who would profit the most from reading Antrim are psychiatrists who never refer patients for ECT—a fact that is unfathomable to ECT practitioners, our patients, and their families and friends. When in his deepest despair, ECT kept Antrim from entering Dante’s seventh circle where suicides languish forever.

Dr Faber is a clinical professor of psychiatry at UT Health San Antonio and director of electroconvulsive therapy at Laurel Ridge Treatment Center.