Psychiatrists can be enormously helpful, they have experience in dealing with very difficult problems and are less fazed than others by some of the difficulties that arise. 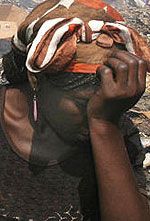 As international faculty from the Center for Mind-Body Medicine (CMBM)-a nonprofit based in Washington, DC-initiate a multiphase program of training Haitians in psychological healing techniques, they confront a population still in shock from the devastating earthquake, reeling from a cholera epidemic, dodging armed mobs in violent election demonstrations, and pondering the return of former dictator, “Baby Doc.”

James S. Gordon, MD, a Georgetown Medical School professor of clinical psychiatry and CMBM founder/director, said the default position for most Haitians is a state of shock. “There is a kind of self-protectiveness, a kind of shutdown, with which any clinician is familiar.”

On his fourth trip to Haiti since the January 12, 2010, earthquake left upward of 300,000 Haitians dead and more than a million homeless, Gordon told Psychiatric Times that the slight reduction in the tent camps populations signals little positive change. The support-food, water, health care-that the camp residents had in the several months following the earthquake “is no longer there to the same degree or reliability, and there is more bitterness, more frustration, more despair.”

The day before the initial 5-day training session, Gordon and a few team members talked with residents of a sprawling tent-and-tarp camp in the Champs de Mars plaza of Port-au-Prince. “Women, and muscular men as well, tell us that if and when they are able to sleep, it is with one eye open, alert to robbers who are often armed, and to rapists,” Gordon wrote in his blog.1 Children have been “hyper” since the earthquake, and everyone is angry. To dissipate the anger, some residents pray, a man says he drinks “medicine” (home brew), and a mother sadly confesses that she beats her children. Psychological issues are of paramount importance, but the country is woefully ill-equipped to solve these problems.

The CMBM is a train-the-trainers model that addresses the trauma caregivers have experienced and their ongoing stress as well as the major psychosocial needs of the Haitian population. Gordon explains, “Our methods are simple, self-care techniques: relaxation; meditation; guided imagery; biofeedback; yoga; self-expression in words, drawings, and movement; and sharing one’s pain and hopes with others in a supportive, small-group setting.”

Moved by Haiti’s plight, a long-time CMBM board member gave the organization funding for 1 year (about $1 million) to establish a program to train a group of 120 Haitians-key personnel from the country’s Ministry of Health in addition to a few psychiatrists, psychologists, physicians, nurses, midwives, social workers, priests, nuns, educators, and voodoo healers; to provide supervision for them for a year; to hire a small Haitian staff; and to develop a Haitian leadership team of 20 who are selected from the group that attended the initial and advanced trainings.

The first 5-day training session, given in December, involved individuals from the Port-au-Prince area. Getting to the training was an arduous and dangerous process: some of the participants were kept away by the demands of cholera care, and later, many had to make their way through large, often armed mobs, angry over the election. During the training, participants described their ongoing stress and almost unimaginable loss. Following the training, participants reported being able to sleep peacefully for the first time since the earthquake and ways that they were sharing the mind-body techniques with others.

The international faculty that includes Gordon and Afrim Blyta, MD, PhD, and Jusuf Ulaj, MD-2 neuropsychiatrists from Kosovo-return to Haiti in February 2011 to deliver additional training and practicum. “We could fill up another training in March if we had the funds for it. There is so much need and desire,” Gordon said.

“Psychiatrists can be enormously helpful,” he said. “They have experience in dealing with very difficult problems and are less fazed than others by some of the difficulties that arise.” Eventually, the organization hopes to train 1500 to 2000 Haitian clinicians, clergy, and peer counselors in the CMBM model who will use what they have learned to help some 100,000 children and adults in the country each year. But, to accomplish this goal, CMBM needs ongoing donations.