Behind the controversy is some common ground, buried deep in the DSM. New insights and podcast here. 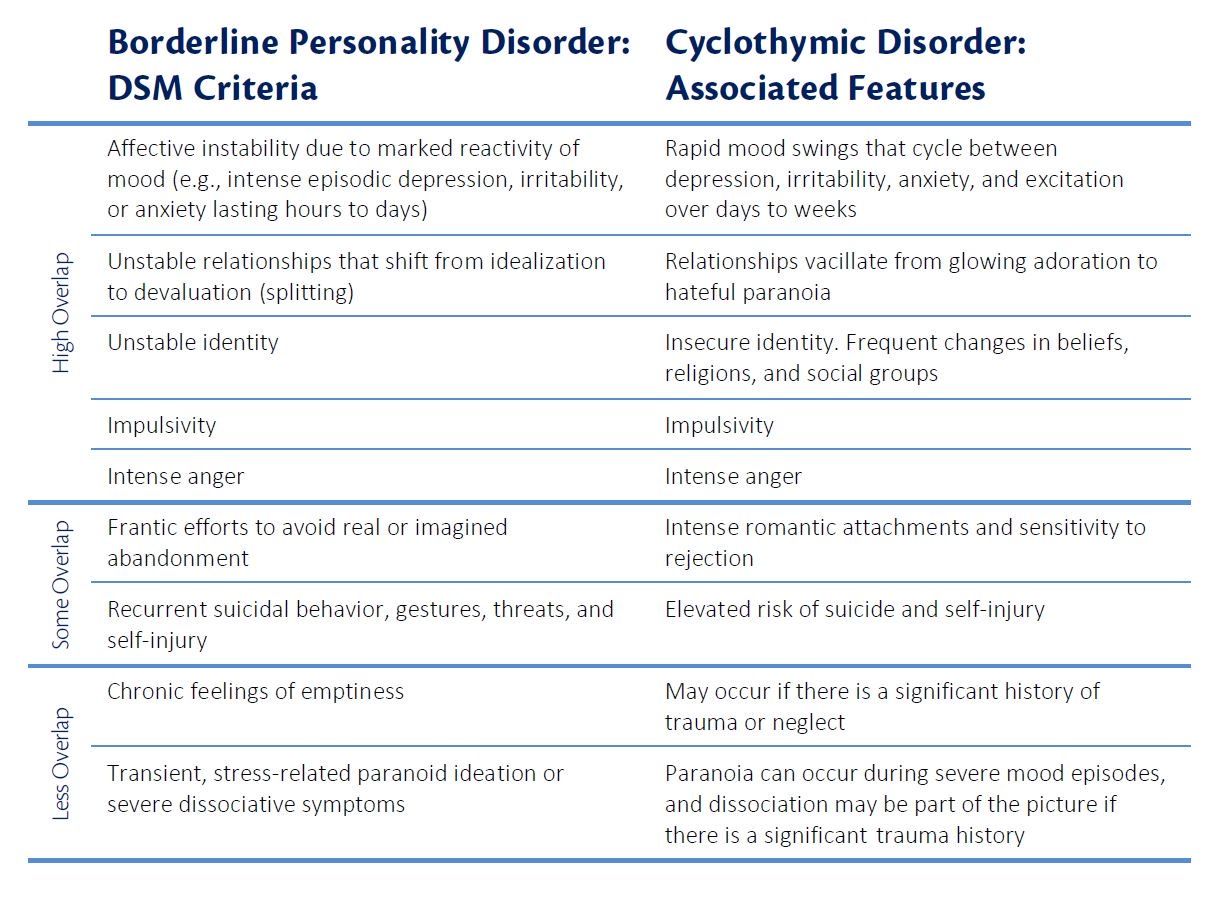 Dr Aiken is Instructor in Clinical Psychiatry at the Wake Forest University School of Medicine and the Director of the Mood Treatment Centerin Winston-Salem, NC. He is Editor in Chief of The Carlat Psychiatry Reportand Bipolar Disorder Section Co-Editor for Psychiatric Times.

Where did we get the idea that bipolar and borderline personality disorders have anything in common? After all, classic bipolar disorder is actually associated with personality strengths. These patients are more extroverted, action-oriented, creative, and resilient than the average person, and fewer neurotic traits than those with unipolar depression.1,2 None of this points toward borderline personality, unless we’re talking about that often misunderstood variant of bipolar: cyclothymic disorder. It’s here where the overlap starts to make sense.

On the surface, there is a wide gap between Marsha Linehan and Hagop Akiskal, the controversial bipolar disorder specialist who once titled a paper “Borderline: an adjective in search of a noun.”5 Dig beneath the rhetoric, and Akiskal seems to agree with Linehan that cyclothymia is the affective component of borderline personality disorder. Specifically, he noticed that patients with bipolar II who had a cyclothymic temperament had numerous borderline features and a stormier course than their pure bipolar II counterparts. He found the noun, and called it bipolar II½: where bipolar II and cyclothymia overlap.6 If he had stuck with the adjective-borderline personality disorder-there would be no debate.

What Akiskal observed was that the unstable temperament of cyclothymia changed the expression of hypomania. Instead of euphoric and productive, these patients were more irritable, impatient, and anxious, with destructive impulses and an elevated risk of suicide attempts. Their depressions were marked by rejection sensitivity and other atypical features. In other words, they often felt anxious and abandoned, and went to impulsive extremes to do something about it (Table).

Those impulsive extremes include “frantic efforts to avoid abandonment,” as well as substance abuse, self-harm, and suicide attempts, all of which are elevated in borderline personality and cyclothymic disorders.7,8 On a temperamental level, both groups have high levels of “harm avoidance” (ie, anxiety) and “novelty seeking” (ie, impulsivity).9,10 Both are also high in “neuroticism” and low in “agreeableness and conscientiousness.”11-13 How does that look in real life? A lot of worry about their relationships, and, within those relationships, a lot of disagreeable and self-defeating behaviors.

So what is all the fuss about? When DSM-III went to press in 1980, this “cycloid” disorder was split into two sections. Borderline went to the personality chapter, and cyclothymic disorder was grouped with the mood disorders.* The rich description of “cycloid personality” was stripped away, leaving cyclothymic disorder with a bland definition that belies its mercurial nature. In DSM’s view, cyclothymic disorder is a mild form of bipolar disorder, and it cannot be diagnosed once the patient progresses to full bipolar I or II. This is not how cyclothymia was originally conceived of by Kraeplin,14 who saw it as a temperament that can overlap with mood disorders or exist on its own.

Whether we call it cyclothymic disorder, borderline personality disorder, or cycloid personality, this temperament has a significant overlap with bipolar II. Akiskal found that 38% of patients with a diagnosis of bipolar II also had a cyclothymic temperament.6 Likewise, a recent meta-analysis concluded that 38% of patients with bipolar II had a diagnosis of borderline personality disorder.15 By either name, the rates are the same.

This is not to suggest that borderline and cyclothymia are identical. Cyclothymia is a risk factor for borderline personality, but it does not always go to that extreme, nor is it the only road there. Other forces are clearly at play here, most notably trauma. Cyclothymia is just one piece of the puzzle, but clarifying its edges can help inform treatment. I will discuss that in a future column.