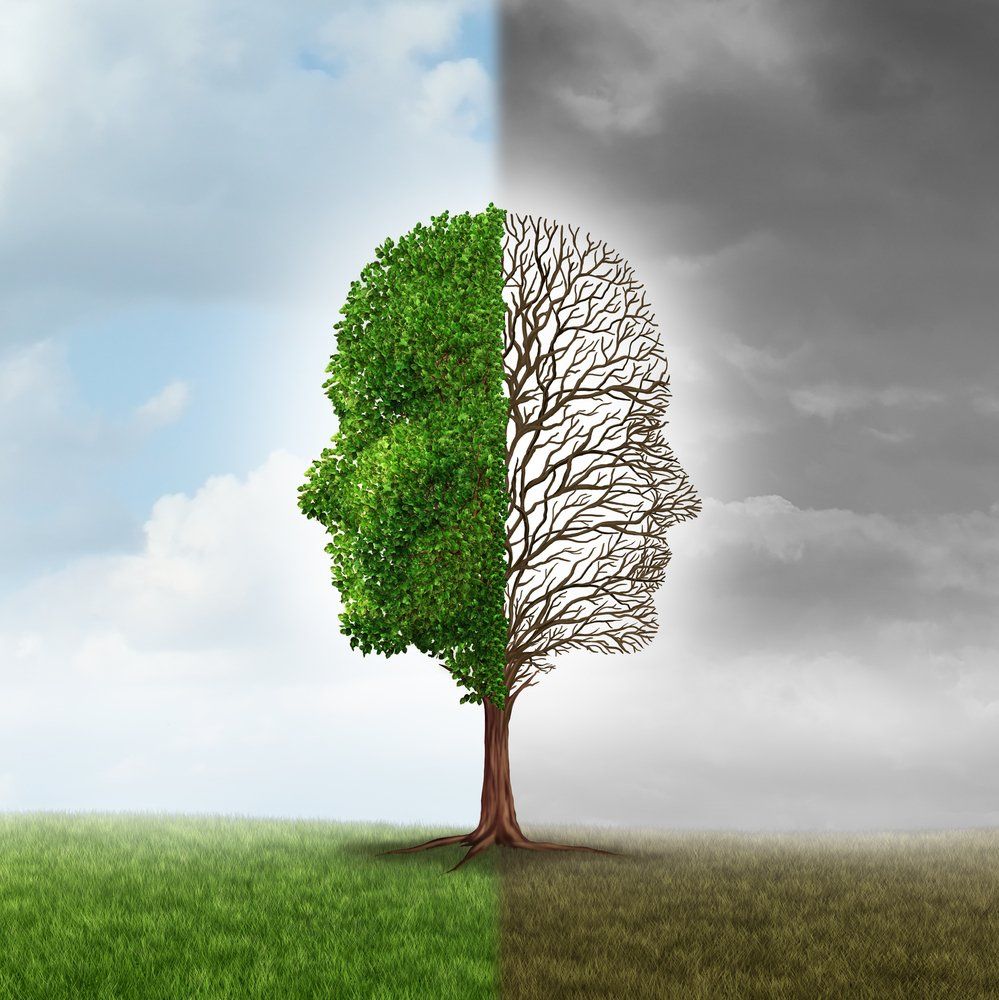 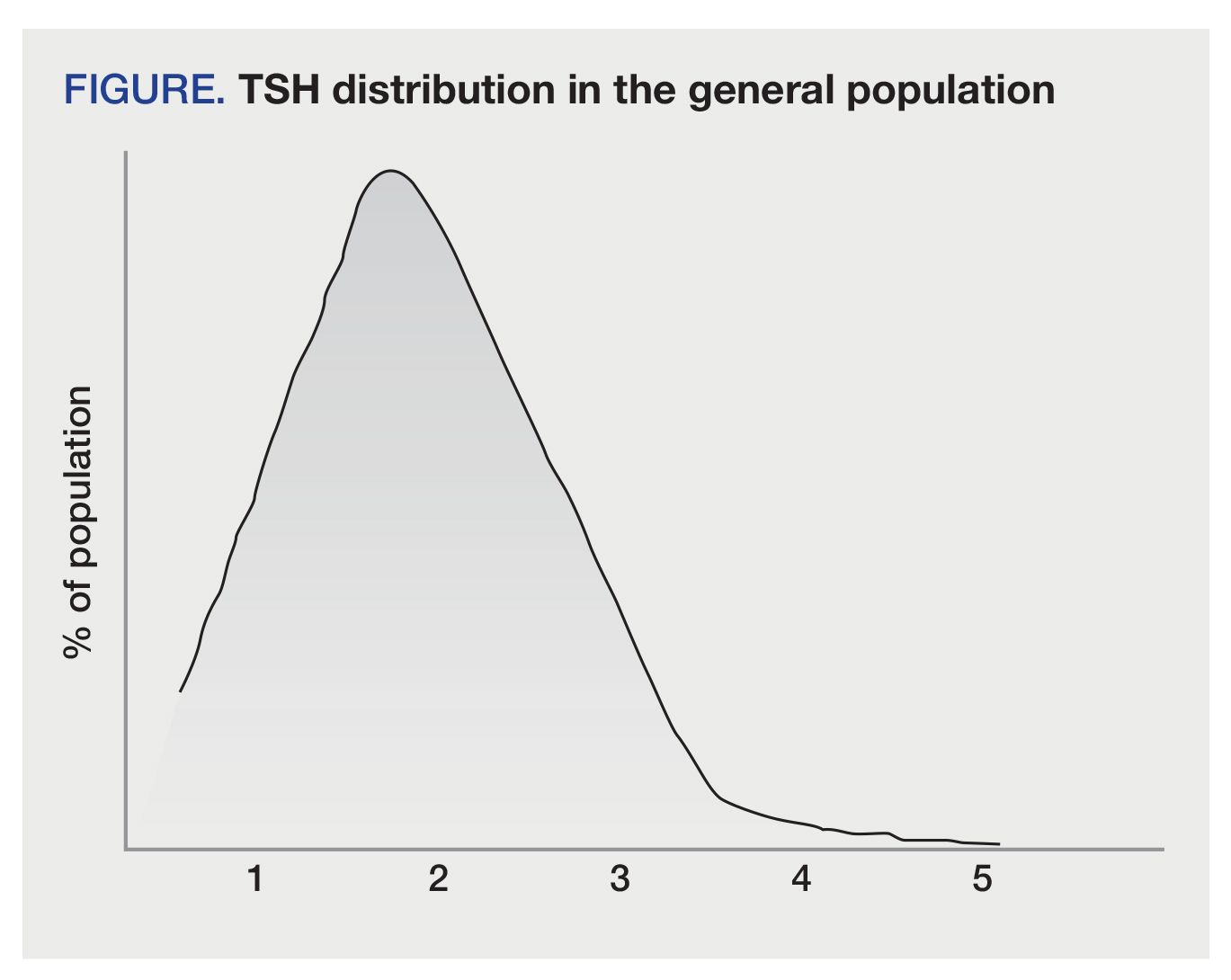 As with many medical disorders, determining thyroid dysfunction is a matter of degree; the standard range cutoffs are used as guidelines. In a review in the American Journal of Psychiatry, Cohen and colleagues1 assert that a level greater than 2.5 mIU/L of thyroid stimulating hormone (TSH) is not normal. As discussed in the article, the range of TSH in the general population is not a bell-shaped curve; rather, it is skewed, as shown schematically in the Figure. More than 90% of the people with no thyroid problems have a TSH reading of less than 2.5. The middle of the laboratory “normal” range is not the middle of the range! A reading of 2.5 is more like the end of normal than the middle. What does this mean for our clinical practice?

When prescribing, target median for age

Why median for age? It is a nice euphemism for “go low!” Many practitioners will pull up short, pushing TSH into the laboratory normal range and leaving patients’ TSH at 2.5 to 3.0. But in major depression, TSH levels between 2.5 and 4.0 have been associated with more severe symptoms, and some data suggest poorer response to treatment.1 For instance, in a study of bipolar depression, the researchers found “outcomes were relatively poor unless patients had TSH values below the median.”3

According to the review in the American Journal of Psychiatry, one should use doses adequate to get below 2.0 as an initial goal. In follow-up, if target symptoms remain that might respond to thyroid hormone, “a full trial of supplementation may require a target TSH near 1,” explained Cohen and colleagues1 (emphases mine).

Initial dosing is not 25 mcg of levothyroxine

If your goal is to land the patient’s TSH between 1.0 and median for age, how much levothyroxine should you use? Per Cohen and colleagues,1 “initial doses or increases in dosages can be low, 50 mcg/day for T4.” But watching my colleagues’ prescribing, including that of primary care providers, it seems that clinicians believe 50 mcg is not “low,” it is more like medium-aggressive.

Initial dosing is not 25 mcg of levothyroxine (continued) >

For comparison, we might say that really aggressive is 100 mcg/day to start and increasing by that amount weekly: that is the protocol for the supraphysiologic approach described last month in Part 1 of this series. (Reviewing briefly, levothyroxine is used as a treatment for bipolar depression at doses sufficient to suppress TSH below the lower limit of normal. Two randomized trials have shown efficacy greater than placebo).

Starting at 75 mcg might be a middle ground, but in my experience most practitioners will find that too alarming, even if the patient’s instructions are “half a pill for a week then one daily.” Let’s try another reference point: recommendations after thyroidectomy. These range from 1.6 mcg/kg to 2.1 mcg/kg, although a BMI-based system begins as low as 1.1 mcg/kg for highly overweight patients.4,5 For a patient who weighs 80 kg, these weight-based doses range from 88 mcg to 168 mcg daily. That gives you some idea of the final dose if you were to take over from the patient’s thyroid gland with your replacement dose.

But your starting dose is not likely to be determined by an algorithm or even your patient’s BMI. It will be determined by your own anxiety about doing harm by overshooting. After all, if you are too low, you will eventually get there using serial TSH measurements.

So, the question about initial dose comes down to the same question with which I left you in Part 1 of this series: What is the risk of driving TSH below the lower limit of the lab normal range? That is where we will pick up in Part 3. For now, remember: target “median for age” and don’t stop until you get there.

Have something to say? Write us at editor@psychiatrictimes.com to share your views. We might include your letter at the end of this article, possibly with a response from the author. Please include your full name, title, and affiliation for consideration. Comments closed two weeks after publication date.

This article was originally published on 8/1/18 and has since been updated.

Dr Phelps stopped accepting honoraria from pharmaceutical companies in 2008 but receives honoraria from McGraw-Hill and W.W. Norton & Co. for his books on bipolar disorder.