Alzheimer disease research may offer the key to effective treatment for former athletes.

Unfortunately, our retired sporting heroes often share more than medals, memories, and magical moments. Increasingly, many are united in suffering from chronic traumatic encephalopathy (CTE) due to repeated head injuries and concussions sustained during their competitive careers.

CTE has been known for more than a century, but is now recognized as a prevalent condition among former stars of many high-impact sports, including American football, soccer, boxing, rugby, and ice hockey. It shares features with Alzheimer disease (AD), and with possible research breakthroughs into treatment for AD, could we start to hope for a treatment for generations of sports people with the condition as well?

Currently there are no disease-modifying therapies for the thousands of former sports players suffering from the memory loss, decline in cognitive abilities, confusion, depression, and behavioral changes that accompany the early-onset dementia stemming from CTE. Age of onset varies but it can be notably early in midlife for many, resulting in a stark impact on quality of life. Cognitive impairment is often accompanied by physical symptoms that manifest as tremors and slurred speech.

In the United Kingdom, a group of 175 current and former rugby players, both male and female, are part of a group legal action against the sport’s governing bodies because they have been diagnosed with traumatic brain injury, early onset dementia, and CTE.1 Indeed, the 8 former professional players who brought the initial case are all under 45 years old. The professional players leading the court case have heartbreaking stories to tell. Steve Thompson, for instance, cannot even remember winning the rugby World Cup with England in 2003 and wishes he had never played the game.2

The claimants are looking to some compelling precedents. A decade ago, the National Football League (NFL), the governing body for American football in the United States, came to a settlement of $765 million, with more than 4500 former players, after conceding that head trauma could have serious lasting consequences.3

Harrison Martland, MD, first reported the association between repetitive head trauma and neurodegeneration in a ground-breaking paper published in 1928. He described a series of boxers who developed a parkinsonian syndrome and mental deterioration later in life and were known as being “punch drunk.”4 His findings were reinforced in a 1973 paper, “The Aftermath of Boxing,” which described the classical pathological appearances of so-called dementia pugilistica and differentiated it from other neurodegenerative diseases.5

Omalu et al published the first case of CTE in a retired NFL player in 2005.6 Today, American football is the contact sport most commonly associated with autopsy-proven CTE,7 with rates of more than 80% being reported in experienced players.8

Among more recent compelling evidence, findings from the FIELD study conducted at the University of Glasgow in Scotland established that the risk of dementia among professional soccer players is almost 4 times higher than among their peers in the general population.9 Awareness of the issue was raised recently by media stories highlighting the prevalence of dementia among members of England’s 1966 World Cup–winning squad.

In response to demand, an international panel of experts called the Concussion in Sport Group (CISG) meets every 4 years to review the latest research and to set protocols on best practices for handling head injuries. So far, however, sports bodies have mainly focused on mitigating future risks such as moving to limit the amount of physical contact in training sessions (which accounts for as much as 90% of collisions experienced by professional rugby players) and to ban tackling in rugby and heading the ball in football for players under 18 years old. However, pitch-side management of athletes with minor head injuries across different sports remains inadequate in many instances.

Until now, there has not been much therapeutic research, and there have not been many clinical trials that could find potential solutions and offer peace of mind for those affected by CTE, or for the generations likely to be affected in the future. However, the disease process leading to CTE is now better understood because of the work of research teams studying pathological features in the brains of former sports players.

CTE is a tauopathy but with a different pattern of tau pathology spread compared with that seen in AD. Researchers at TauRx Therapeutics have been studying tau pathology in AD for decades, focusing on the development of a tau aggregation inhibitor—currently in a late-stage clinical trial called LUCIDITY studying mild cognitive impairment due to AD and mild-moderate AD—in recognition of the established correlation between tau pathology and the rate of clinical decline in patients with AD.

CTE shares key features with AD. Tau protein in a healthy brain plays a critical role in microtubule stability, allowing for the effective transport of cell nutrients and neurotransmitters to the synapse. However, if the tau protein malfunctions through brain injury (as in CTE) or age-related factors (as in AD), then it misfolds and causes other free tau protein to misfold and aggregate. This forms insoluble aggregated tau tangles and sets off a chain reaction of aggregation of abnormal tau. These tau aggregates can rapidly spread between cells, leading to a point at which irreversible neuronal cell damage occurs.

Although CTE has been seen in young individuals, symptoms do not generally appear until years after the concussions or head impacts have been sustained. This suggests that there is a window of opportunity to intervene therapeutically. 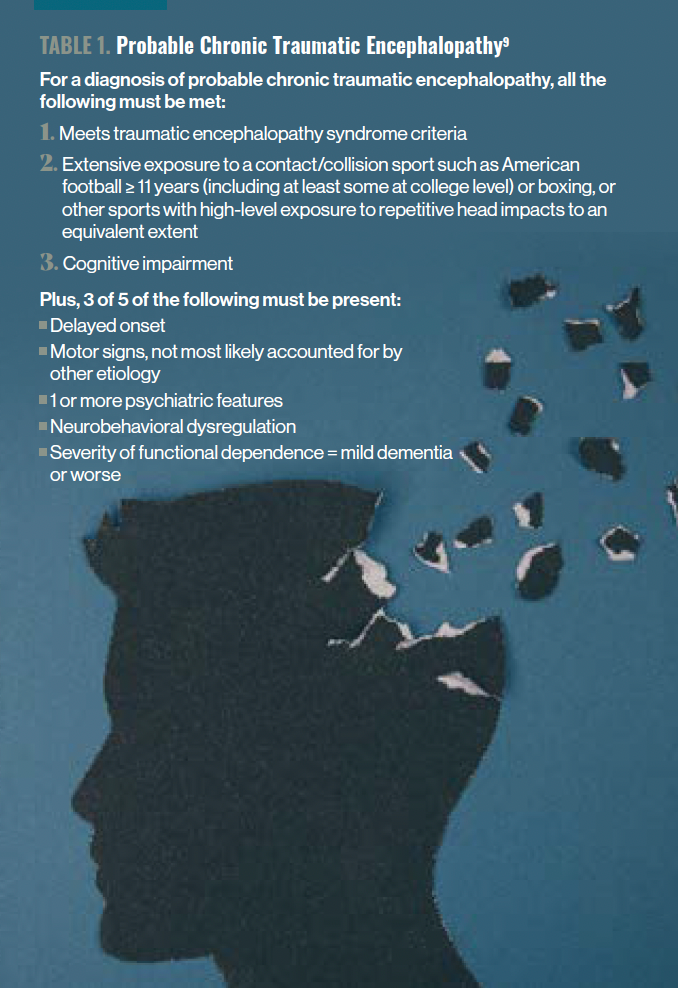 Treatment of established CTE is currently limited to supportive measures with a variety of symptomatic medications currently used for AD and Parkinson disease, psychostimulants, and antidepressants; however, the evidence base is weak and there are no approved medications for CTE. But greater understanding of tau pathology, as the common link between sports-related early-onset dementia and other tauopathies such as AD, could offer a way forward. Clinical trial data suggest that tau aggregation inhibitors have the potential to disassemble the tau tangles and allow the clearance of the tangled, or misfolded, proteins in order to slow clinical decline and reduce the damage to synaptic transmission and brain function.

Given that CTE is a tauopathy, research into tau-based therapeutics is the major focus for developing disease-modifying treatments. Diagnostic criteria for probable CTE (Table 1),9 including the related criteria for traumatic encephalopathy syndrome (Table 2),10 are available and have been weighted toward the high specificity required for clinical trials. 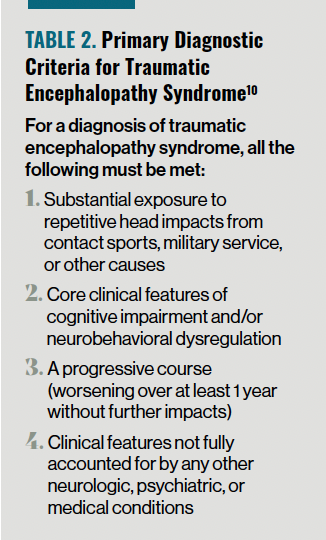 Therapeutic research and clinical trials have the potential to find solutions and offer hope for those individuals affected by CTE now, and for the generations likely to be affected in the future. Tau aggregation inhibition could prove to be a promising target for disease modification in other non-AD tauopathies like this.

A century after the identification of dementia pugilistica and punch-drunk syndrome, AD research may offer the key to effective treatment for the sporting heroes whose lives have been blighted by the sports to which they gave so much.

Dr Miller is a specialist anesthetist, having worked as a consultant anesthetist for 25 years. She entered pharmaceutical research when she began working as a sub investigator and principal investigator in London, England, focusing on Alzheimer disease. She joined TauRx Therapeutics in 2018 as medical oversight lead, responsible for patient safety in the TauRx trials. In her additional role as head of medical affairs, Dr Miller is responsible for relationships with external stakeholders and leads the information and education delivery resulting from TauRx’s research programs.