How to help the one-third of patients with panic disorder who have chronic, persistent symptoms? 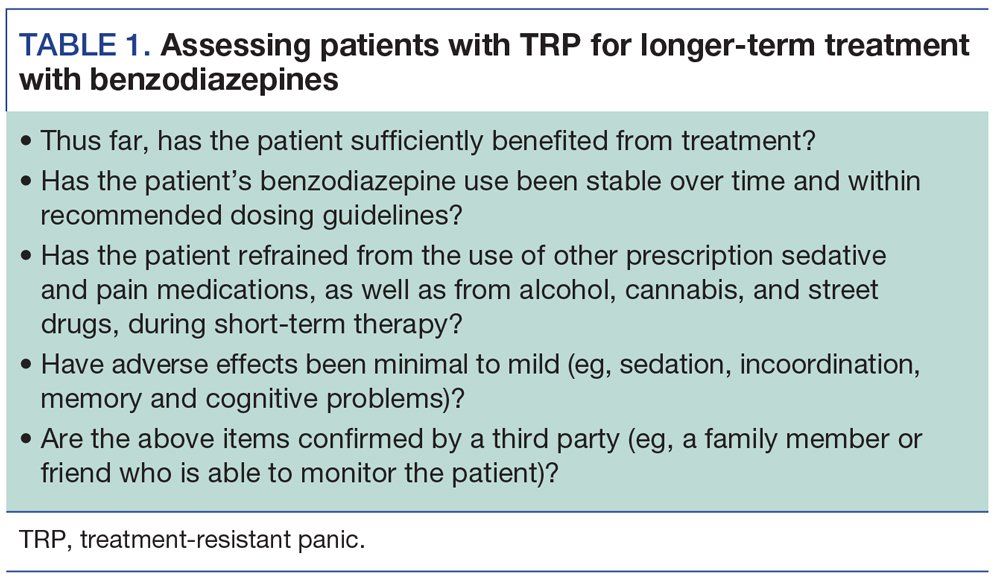 TABLE 1. Assessing patients with TRP for longer-term treatment with benzodiazepines 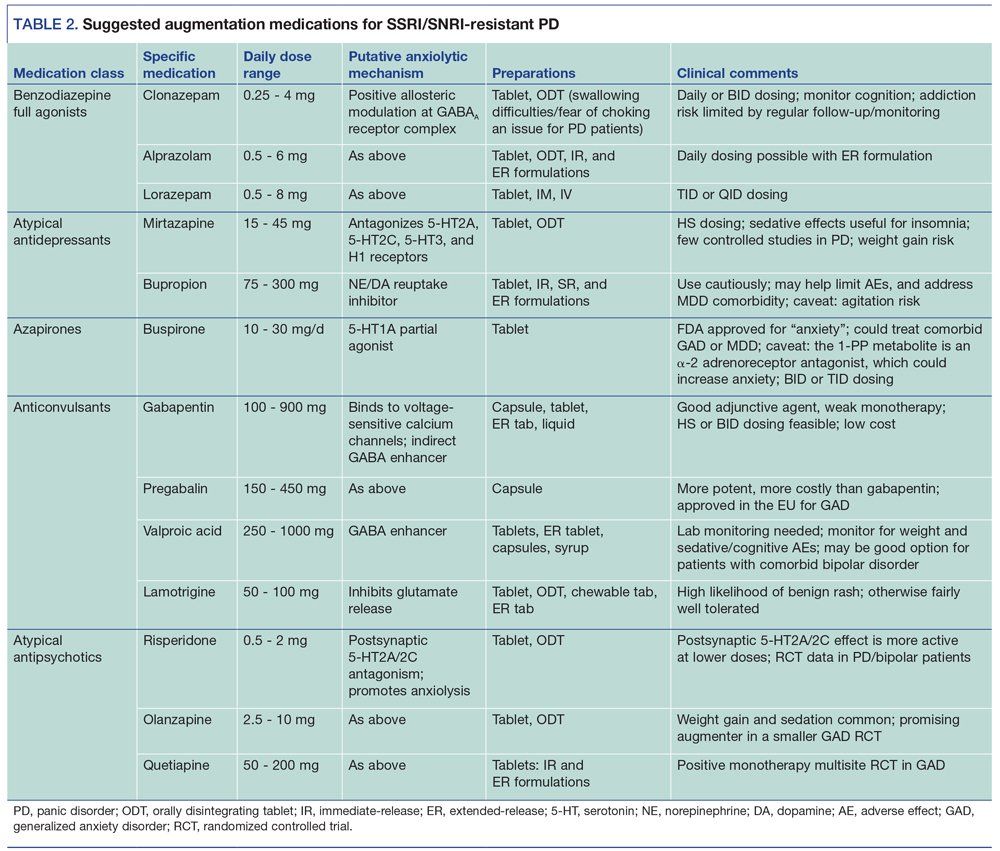 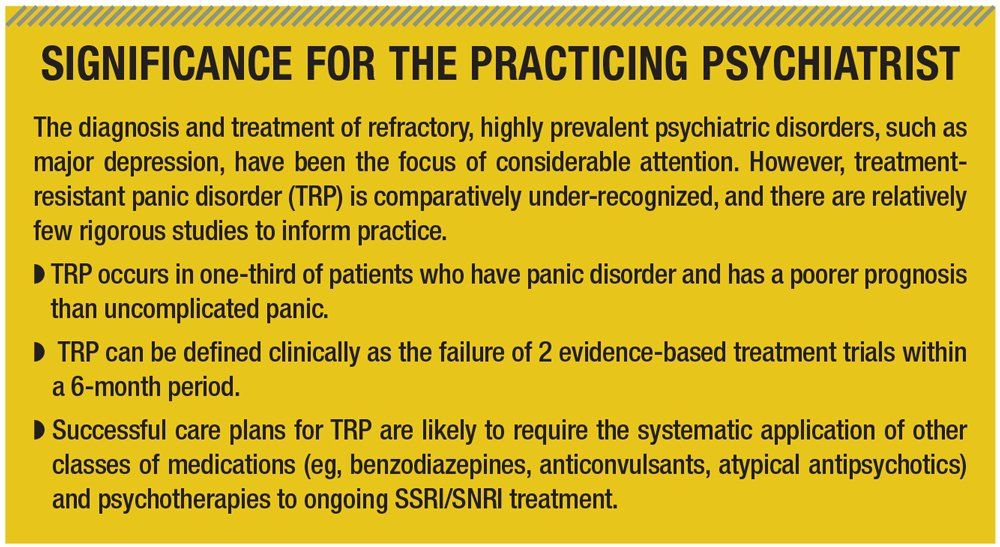 Concerning the natural history of PD, approximately one-third of patients have a clinical remission with standard interventions (pharmacotherapies and cognitive behavioral therapy [CBT]), without subsequent episodes. In another third, the course of the illness is characterized by recurrent episodes, which remain treatment-sensitive. However, a third go on to have chronic, persistent symptoms-and the majority of these patients have treatment-resistant panic (TRP).1

Treatment resistance in PD may be apparent or real. Apparent treatment resistance may be due to a range of clinical factors including unstable psychiatric and medical comorbidities, patient adherence problems, clinician availability (important to PD patients early in treatment), or therapeutic alliance problems, often driven by cognitive and behavioral avoidance. Other treatment-related factors to consider are medication intolerance/pharmacokinetic issues, treatment acceptability, access to care, and treatment costs. However, despite a careful review of the diagnosis and adjustments to the treatment plan, a number of patients will have ongoing, real TRP.

Exactly what constitutes treatment resistance in PD is a topic of debate. However, one clinical definition is continued partial response, or non-response, after 6 months of optimal treatment with at least 2 standard, evidence-based interventions.2

A straightforward measurement-based approach can complement this clinical guideline. The Panic Disorder Severity Scale (PDSS), a commonly used outcome in PD clinical trials, is also an excellent scale for general clinical use.3 It is a brief, clinician-rated assessment that consists of 7 items (each rated 0 to 4), which sample different domains of PD symptoms. In clinical trials, a PDSS total score of 4 or lower is often considered a clinical remission, while a clinical response is frequently defined as a 50% reduction from the baseline PDSS total score.

Some experts suggest that patients should not have an individual PDSS item score higher than 1 to qualify for remission status. Thus, by PDSS criteria, TRP patients will have only a partial or limited response to specific interventions and, over the course of treatment, will fail to achieve a remission state.

A chronic, persistent illness course is likely to carry an increased risk of various known complications. These include sequelae such as agoraphobia, major depression, other anxiety disorders, substance abuse, and an increased risk of suicidality. Functional implications include diminished quality of life, under- or unemployment, and social isolation. Moreover, TRP patients might be at higher risk for chronic inflammation and physical health conditions, such as cardiovascular and neurodegenerative diseases.

Potential clinical predictors of TRP are earlier age of illness onset; severity of symptoms; psychiatric comorbidity; high levels of sensation sensitivity; high trait anxiety; chronic, persistent life stressors; and a history of early childhood trauma. The mechanisms responsible for the development of TRP are unclear. However, PD is heritable, and genetic and epigenetic factors have been implicated in its pathophysiology. Genetic variations in key stress and fear-related brain neurotransmitter systems (eg, the 5-HT, norepinephrine, dopamine, GABA, and peptide systems) and their attendant impact on brain fear network activity, and even morphology, are likely to affect treatment sensitivity.

After factors that contribute to apparent resistance have been addressed, the next consideration is a review of the treatment history to ascertain which evidence-based interventions the patient has already received, and to ensure that these have been applied for an adequate period (eg, 8 to 12 weeks) and at an appropriate dose/intensity level.

Evidence-based pharmacotherapies include SSRIs, SNRIs, TCAs, the MAOI phenelzine, and benzodiazepine agonists (eg, clonazepam and alprazolam, which are approved by the FDA for panic). Recommended psychotherapies include CBT (especially individual CBT). Data from a large meta-analysis of anxiety studies suggest that combination treatment (medication plus CBT) is likely to be superior to monotherapy and should now be routinely offered.4 In a large, placebo-controlled, multisite, comparative PD treatment study of CBT (with interoceptive desensitization) plus imipramine versus monotherapies, combination treatment effects were superior at the end of 12 weeks.5 Although the patient has a diagnosis of TRP, the goal of treatment is still to achieve a remission state, as this protects against relapse and lowers the risk of complications.

Genetic testing may be of value if the patient has been intolerant of or resistant to several standard-of-care medication trials. Findings suggest that patients (especially females) with 5-HT transporter promoter gene short (s) alleles, are less likely to respond to SSRI treatment.6 Moreover, patients who are “slow metabolizers” may respond to modest doses of standard agents and require a slower upward titration schedule.

Optimize SSRI/SNRI therapy. This next step is a simple one and could be helpful, especially if the patient has other psychiatric comorbidities. However, one controlled trial of next-step treatment in PD patients resistant to an initial SSRI trial did not find additional benefit for core panic symptoms with dose optimization.7

Switch to another antidepressant agent. Within-class switching may not be a high-yield intervention. However, switching to an agent with a different pharmacodynamic profile is a reasonable step. For example, one good option is imipramine, often overlooked because of its risk of cardiotoxicity in overdose; yet it is one of the most intensively studied antipanic agents available. MAOIs, also seldom used now, can be surprisingly helpful as well.

Avoid monotherapy with bupropion because this is very activating for the average PD patient. In addition, there are little efficacy data on the benefits of newer antidepressants (eg, vortioxetine, milnacipran) in TRP.

Adverse effects such as sedation and incoordination are most apparent in the initial weeks of therapy, and this is when the risks for operating heavy machinery and driving are elevated. Thereafter, tolerance to the sedative effects occurs.

Benzodiazepines may have a long-term tolerability edge over the SSRIs, SNRIs, and TCAs, as they do not cause weight gain or sexual dysfunction. Generally, high-potency, shorter half-life benzodiazepines are preferable because of their more predictable pharmacokinetics and simpler metabolism. Regular dosing (vs PRN) is recommended to achieve optimal anxiolysis. In considering the rationale for long-term benzodiazepine administration, review the Dupont criteria clinical probes listed in Table 1.8 For additional details on dosing and administration, see Table 2.

The concern that benzodiazepines disrupt the effectiveness of evidence-based psychotherapies for panic, such as CBT, has not been confirmed in recent anxiety clinical trials.

Augmentation strategies (Table 2). A meta-analysis of controlled studies in resistant anxiety disorders demonstrated limited additional benefits with several augmenting strategies (benzodiazepine, atypical antipsychotic, or pregabalin).9 The second step of the study from Simon and colleagues7 included random assignment to either clonazepam or CBT. These options were similarly effective next-step interventions. Accordingly, coadministration of a benzodiazepine is a reasonable first-choice augmentation option and is safe for longer-term treatment.10

If this is not effective or tolerated, coadministration with an atypical antidepressant, such as mirtazapine, is a reasonable second step. A suggested third step in augmentation is addition of an anticonvulsant agent (eg, gabapentin, pregabalin, valproic acid, lamotrigine), as data from meta-analyses provide some support for this practice in anxiety and PD, and even suggest the potential benefit of an EEG in the work-up for TRP patients to improve anticonvulsant outcomes.11

Finally, while a positive evidence base for second-generation antipsychotics in PD and TRP is limited, current reports suggest that low-dose coadministration or monotherapy is tolerated in short-term trials.12 Specifically, olanzapine, quetiapine, and risperidone were generally well-tolerated. In one small, 12-week, placebo-controlled trial in patients with SSRI-resistant PD, lower-dose quetiapine ER coadministration, on average, did not provide additional clinical benefit, yet was fairly well tolerated.13

Psychotherapeutic options. Effective psychotherapies for PD include CBT (strongest evidence), panic-focused psychodynamic psychotherapy, and CBT with a mindfulness component, and these are also suitable options for TRP. Where access to therapy is a problem, online CBT programs can be of value and have growing empirical support.14

CBT may be augmented with pre-session cognitive enhancement interventions, such as oral administration of the glutamine/NMDA receptor glycine site partial agonist, D-cycloserine. However, results of this strategy in larger-scale trials of anxiety spectrum disorders have been mixed.15 Attention bias modification therapy has shown promise in clinical trials across anxiety disorders and may be useful for some patients.16 Finally, acceptance- and commitment-focused CBT could be of value for the patient with TRP who has been resistant to most other psychotherapeutic approaches.

Other interventions. Complementary/alternative/integrative interventions for PD, such as moderate exercise, may add additional benefit to the treatment plan. Transcranial magnetic stimulation has demonstrated some promise for difficult-to-treat panic and might become an established care option pending further study. Consultation with a mental health provider who specializes in anxiety should also be considered when treatment has reached an impasse. Area providers can be accessed through the Anxiety and Depression Association of America website: www.adaa.org.

TRP is a common clinical problem that has been understudied and under-recognized compared with other high-prevalence refractory conditions, such as treatment-resistant depression. There has been debate about the criteria for resistance, but failure of optimal treatment (attainment of remission) with 2 evidence-based interventions, over a 6-month period, is a useful clinical definition. One measurement-based approach to TRP recognition involves the use of the PDSS. In general, the goal of clinical treatment of PD is to achieve a remission state (PDSS total score of 4 or lower). TRP should be treated vigorously with this goal in mind, as residual symptoms confer a higher risk of clinical complications.

While few controlled treatment studies inform monotherapy, combination treatment, and augmentation approaches for TRP, clinical guidelines, treatment meta-analyses, and expert opinion offer some guidance. On occasion, special tests such as EEG or genetic testing may be indicated and can contribute to better outcomes. Currently, a range of interventions (pharmacotherapies, psychotherapies, and complementary and neuromodulation interventions) offer hope and help for patients. However, in the future, personalized medicine strategies, involving baseline genotyping and functional neuroimaging, may afford a more predictive approach to TRP care planning.

Dr. Goddard is Professor of Psychiatry, University of California at San Francisco, UCSF Fresno Medical Education & Research Program, Fresno, CA. Dr. Goddard receives royalties from UpToDate for an on-line manuscript publication; he is also the recipient of pilot grant funds from the National Network of Depression Centers (NNDC) for a multisite ketamine trial.

10. Starcevic V. The reappraisal of benzodiazepines in the treatment of anxiety and related disorders. Expert Rev Neurother. 2014;14:1275-1286.

12. Perna G, Alessandra A, Raffaele B, et al. Is there room for second-generation antipsychotics in the pharmacotherapy of panic disorder? A systematic review based on PRISMA guidelines. Int J Mol Sci. 2016;17:551.