This article describes a model for anorexia nervosa that is useful when working with patients or families to help them understand the complexity of the illness. 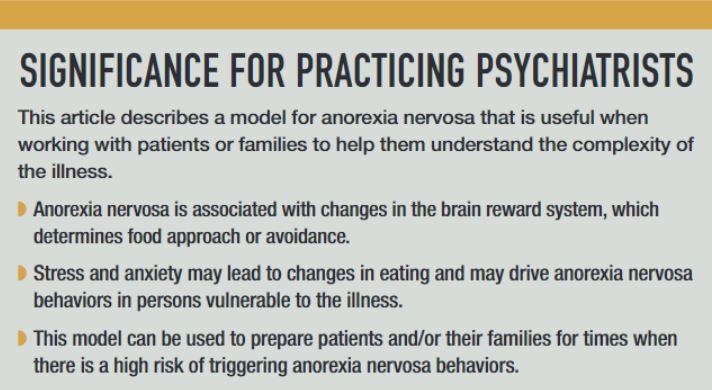 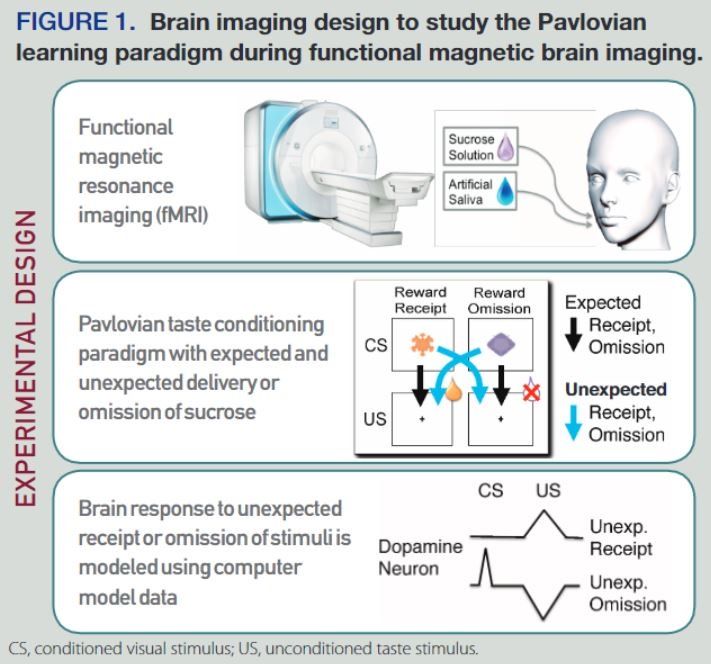 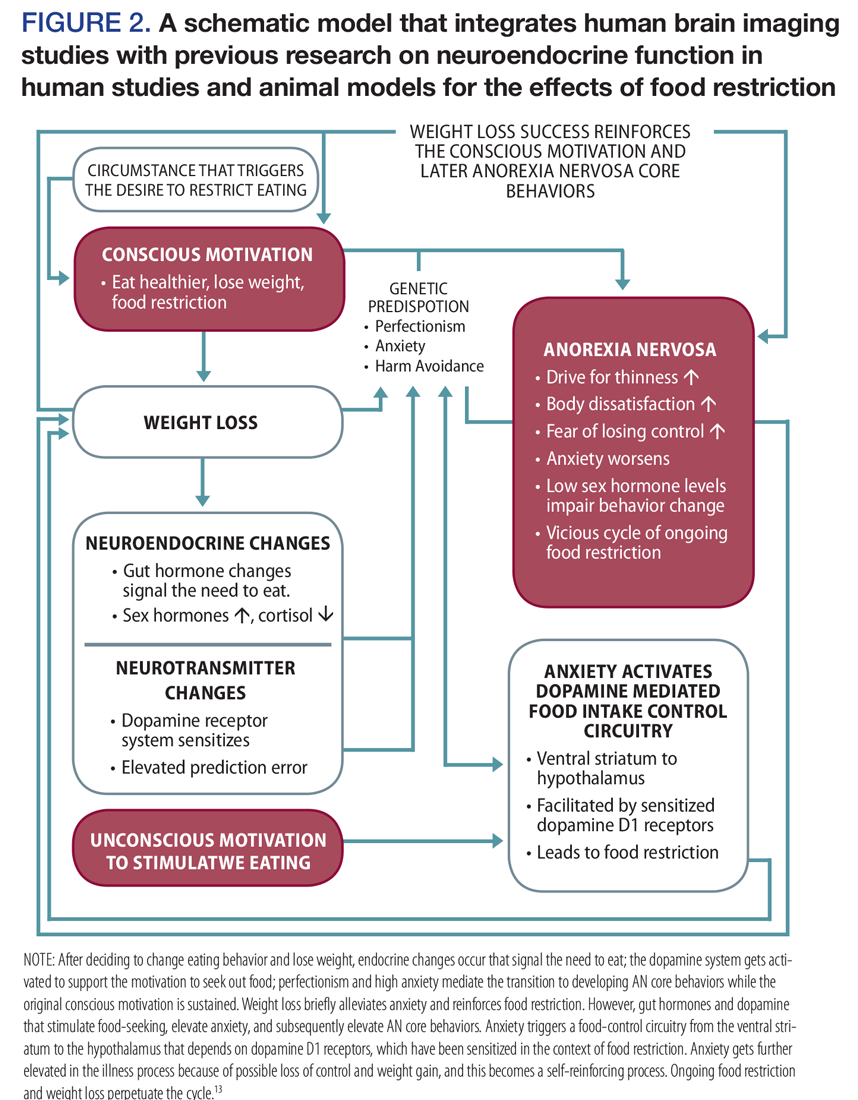 FIGURE 2. A schematic model that integrates human brain imaging studies with previous research on neuroendocrine function in human studies and animal models for the effects of food restriction

Anorexia nervosa is the third most common chronic illness among adolescent females. The mortality rate is 12-fold higher than with all other combined causes of death for females aged 15 to 24 years.1 The disorder is associated with severe emaciation from self-driven food refusal and a perception of being overweight despite very low body weight. Anorexia nervosa shows a complex interplay between neurobiological, psychological, and environmental factors, and it is a chronic disorder with frequent relapses, high treatment costs, and severe disease burden. Little is known about the pathophysiology or biomarkers that characterize anorexia nervosa brain function, treatment effectiveness is limited, and there are no FDA-approved medications.2

What makes anorexia nervosa so difficult to treat is the seemingly willful food avoidance and self-driven relentless motivation to lose weight. While eating is a very normal behavior for most of us, overcoming the fear of eating and weight gain is extremely difficult for children or adults with anorexia nervosa. Humans have historically evolved to be biologically protected to survive times of food scarcity. The brain circuitry that drives food-seeking has been well defined in basic science models.3

Developing neurobiological models for anorexia nervosa and existing mechanisms that disregard or override hunger signals has been much more difficult. Moreover, there are psychological and social factors involved in anorexia nervosa, including anxious traits and the tendency to worry, and their interaction combined with peer pressure and stress in general affect illness behaviors.4 This has made it difficult to tease apart environmental effects from brain biology that poses a vulnerability for developing or maintaining anorexia nervosa.

Recent brain research in anorexia nervosa has focused on reward pathways, with the hypothesis that these pathways might disturb food approach mechanism in anorexia nervosa. Food is a salient stimulus or natural reward, and reward pathways similar to those of substance abuse are activated when we desire, approach, or eat food.5 Important regions in this circuitry include the ventral striatum, which receives midbrain dopaminergic input and drives motivation and the reward approach; the orbitofrontal cortex responsible for reward valuation; the insula, which processes our taste sensations and provides input to the striatum; and the hypothalamus, which integrates body homeostasis.5,6 The circuitry between those brain regions may adapt to weight loss and instead of driving eating may reinforce food restriction in individuals vulnerable to anorexia nervosa.

A variety of studies in the past applied tasks that either showed food pictures or delivered monetary or taste rewards to stimulate the reward system. The studies repeatedly showed that the insula, orbitofrontal cortex, or striatum activated differently in persons with anorexia nervosa during those tasks compared with healthy controls.

In our laboratory, the aim is to identify chemical targets to develop better treatments for anorexia nervosa. To accomplish this, we applied reward tasks that were closely associated with brain dopamine response to find evidence of dopaminergic involvement in the pathophysiology of anorexia nervosa.

The dopamine neurotransmitter system has been intensively studied and well characterized. Its neurons’ cell bodies lie in the brain stem in the ventral tegmental area and substantia nigra and from there distribute to the cortical and subcortical brain. The basal ganglia and especially the ventral striatum that includes the nucleus accumbens receive dopamine input and have been involved in the drive to reward stimuli. The reward stimuli can be unconditioned or conditioned (learned) stimuli.

A central feature of dopamine neuron response is that it is triggered by unexpectancy, ie, a discrepancy between what one expects versus what in fact happens. After receiving an unexpected reward such as food or money, a dopamine surge is elicited in the striatum and midbrain, which is called a positive prediction error response. When receiving this reward becomes a regular occurrence, the dopamine signal is triggered by the conditioned stimulus that predicts the reward. However, the dopamine system does not respond when the actual reward is received (prediction matches the outcome). If the reward is predicted but not received (there is no food or money after expecting it), there is a dip in dopamine activity in the brain, which reflects the negative prediction error (unexpected omission).

This dynamic can be studied in the living human brain with functional brain imaging during the application of a Pavlovian conditioning paradigm: participants learn to associate sugar-taste or monetary stimuli with pictures of colored shapes that become the conditioned stimulus and appear on the screen before money or sweet solution are delivered (Figure 1). Sometimes when the participants expect to get the reward, they will not get it; at other times the reward is delivered unexpectedly.

During these studies, adults and adolescents with anorexia nervosa repeatedly showed elevated response to the unexpected conditions in the insula and striatum, which suggests altered dopamine function.7-9 Basic science found that in the process of food restriction, the dopamine system in the brain gets sensitized to stimulate food seeking. We interpreted this elevated activation as a normal response.

This brain activation does not drive eating as it would in heathy individuals. In fact, it can often be observed in individuals with anorexia nervosa that despite weight loss, fear of weight gain worsens and there is no limit as to how low the weight will drop. In our most recent study, we propose a model of how this drive to lose weight may be perpetuated and how the elevated prediction error response fits into this behavior.9 Our findings indicate that elevated brain response correlated positively with harm avoidance-a measure of trait anxiety-but negatively with weight gain during treatment.

Harm avoidance was positively correlated with drive for thinness and body dissatisfaction. We propose that when a person who develops anorexia nervosa starts to lose weight, the dopamine system quickly gets faster or more strongly involved, ie, sensitized. Weight loss leads to low blood sugar and changes in hormonal and neuropeptide levels, which signal to the hypothalamus that the organism should eat. However, this biological motivation and drive to eat disagrees with conscious motivation to not eat and lose weight, which leads to high levels of anxiety. To avoid weight gain and driven by extreme anxiety, the person with anorexia eats even less, which further reduces weight and triggers more biological drive to eat and further increases anxiety. Thus, setting off a vicious cycle that is difficult to break (Figure 2).

Benefits of understanding the mechanism

Clinically, this has been a useful model to discuss the neurobiology of anorexia nervosa with patients or families. I draw and develop this model in a monthly seminar with parents of children with anorexia nervosa, which helps them understand the typically very difficult to comprehend ongoing drive for food restriction.

Understanding a certain mechanism does not cure the illness, but it provides opportunities to support treatment. In psychotherapy it helps to go from something inexplicable to understanding the connection between an anxious temperament with a predisposition to worry and eating problems. This is also relevant for patients who have recovered but who may be at risk for relapse.

Every year in August, around the time when school starts, I see several patients with symptom relapse in my outpatient clinic. This is due to heightened stress over grades that triggers eating problems and food restrictions. The subsequent weight loss may then set in motion the vicious biological cycle as previously described.

As do other biological studies including genetic research, such a model serves another important purpose. Psychiatric diseases are often associated with stigma and personal guilt. The more we understand the underlying neurobiology of psychiatric disorders such as eating disorders, the more we will be able to develop medical models, find more effective treatments, and reduce stigma.

Our research has helped to pose new hypotheses for potential treatment directions. In animal models, fear extinction was aided by dopamine receptor stimulation.10 A main focus of psychotherapy for anorexia nervosa is weight restoration, such as family-based therapy in youth, which requires overcoming the fears of eating. We hypothesized that dopamine receptor stimulation could be helpful in the treatment process for anorexia nervosa. We compared youth treated with the partial dopamine D2 receptor agonist aripiprazole with those who did not receive aripiprazole. The patients who received aripiprazole had better weight outcomes at the end of treatment.11 However, a controlled study is missing, and no firm conclusions can be drawn from these results. Although such a medication alone would probably not cure anorexia nervosa, it could, however, act as a catalyst in concert with psychotherapy.

The conceptualization of the neurobiology of anorexia nervosa in our model poses a dichotomy of frontal cortex cognitive-emotional and subcortical basal ganglia involving circuits. What has been very difficult to model from a biological perspective are the severe eating disorder core behaviors such as body dissatisfaction and drive for thinness. Those thoughts and drives can persist life-long in a person despite having recovered weight-wise from anorexia nervosa. It is possible that the anxious traits commonly found in anorexia nervosa-even before the onset of the disorder-come into play and perpetuate those behaviors, making “letting go” extremely difficult.4

Models to test how to target the behaviors pharmacologically still need to be developed. Serotonin reuptake inhibitors can help with anxiety and depression but do not improve the core behaviors of anorexia nervosa.12 A more complex biochemical model may be needed for anorexia nervosa. Such a model would take into account the interaction between neurotransmitter systems such as dopamine and serotonin and signals from the body periphery such as gut hormones and their adaptation to food intake.

Recent data lend themselves to applying a neurobiological model when talking with patients, parents, or families about anorexia nervosa. This can reduce personal burden, shame, or guilt. Weight restoration continues to be a key aspect of treatment, and there is the possibility that this is supported by dopamine receptor agonists, although this is yet uncertain as controlled studies are lacking.

Dr Frank is Professor in Residence, University of California, San Diego, Eating Disorder Program for Treatment and Research, and Rady Children’s Hospital, San Diego, CA. He reports that he has received research funding from the NIMH, is on the Scientific Advisory Board of EDCare, and has provided expect testimony for Senter Goldfarb, & Rice.

12. Lock J, La Via MC, and the AACAP Committee on Quality I. Practice parameter for the assessment and treatment of children and adolescents with eating disorders. J Am Acad Child Adolesc Psychiatry. 2015;54:412-425.