In Love: A Memoir of Love and Loss 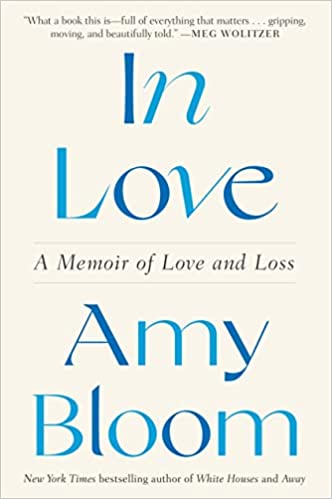 In Love: A Memoir of Love and Loss by Amy Bloom

In Love: A Memoir of Love and Loss

Amy Bloom does not waste any time. Within 3 pages, readers learn the arc of her story—that Brian, the author’s husband, has developed Alzheimer disease; that he is charming, spirited, and vital; that Amy and Brian love to travel, sharing gum and water on their airplane trips, including one to Switzerland; that they are in love; and that Brian has decided to end his life by “accompanied suicide” at Dignitas in Zurich.

First is the book’s dedication: “For Brian.”

Then, the epigraph: “‘Please write about this,’ my husband said.”

Why read such a book? The whole story is foretold at the outset. There are no surprises. The subject is terribly controversial and downright depressing. But In Love is not about death. It is about life—an ode to Amy and Brian’s deep and touching intimacy that endures to the end. The book is creatively crafted, shifting back-and-forth in time, the way associative memory moves from past to present and from inner thoughts to outer realities. Along the way, there is a lot for psychiatrists to learn.

Alzheimer disease moves in with a family, quietly at first. Even once a patient or family member finds the courage to seek medical consultation, they likely will still have doubts about whether something is really the matter. If they enter a psychiatrist’s office—for the first time or the hundredth time—they might be thinking that cognitive changes are due to depression, anxiety, stress (of which there is no shortage), transient postanesthesia memory impairment, sleepless nights, or normal aging. They might describe increasing tension with a spouse, a boss, or adult children. Would you recognize the early signs of this degenerative disease in such presentations?

Approximately 6.5 million Americans are living with Alzheimer disease today, and that number is projected to rise to about 13 million by 2050.1 Whatever your practice may be, you will surely see patients with Alzheimer disease or their family members. We now know that brain changes that characterize the disease begin to appear approximately 10 years before clinical symptoms—long before mild cognitive impairment and very long before mild dementia. Brain MRI, neuropsychological testing, and amyloid and tau PET scans are useful diagnostic tools, and in most cases, it is possible to make a definitive diagnosis based on cerebrospinal fluid biomarkers. Numerous blood assays have already been developed and are being studied to determine which are the best predictors of cognitive decline.2

The US Food and Drug Administration (FDA) recently approved Aduhelm (aducanumab) for the treatment of early Alzheimer disease. Aduhelm is a monoclonal antibody that targets beta-amyloid plaques in the brain. Approval of the drug has been controversial, largely because of its small effect size in combination with a high incidence of serious side effects, as well as its $28,000/year price tag: Medicare will only cover Aduhelm for patients in clinical trials. Nonetheless, the indications for this medication are a wake-up call to clinicians: It is prescribed only for the treatment of mild cognitive impairment or early dementia caused by Alzheimer disease. Early identification is crucial. And while we do not yet have an altogether safe and effective pharmacologic treatment that is widely available, we do know that early diagnosis of Alzheimer disease will be even more essential once such a medication is developed.

Bloom paints a word picture—as only a gifted writer can—of the early signs of Alzheimer disease and her emerging realization that there really was something wrong with Brian. Or was she just imagining it? Why was she so irritable with him? Why were they fighting so much? Why had his boss asked her accomplished architect husband with such a high IQ to take an early retirement? Why did her gregarious soulmate not want to see friends? Why was he only talking about the past? As psychiatrists, we get to peer into the very beginnings of Brian’s disintegration and the widening ripples, then tidal waves, that his disintegration caused in Amy and Brian’s life together:

I could feel him through a glass, and I was banging on it, screaming at him: Why is there a glass between us? Where did it come from? Take it down! And Brian looked at me with puzzled, irritated concern and said, in effect, What glass? And, Please please stop complaining about this thing that isn’t even there.

I called the neurologist and made an appointment.

In Love revolves around the pivotal decision that followed Brian’s Alzheimer disease diagnosis: “It took Brian less than a week to decide that the ‘long goodbye’ of Alzheimer’s was not for him.” Brian was a lover of life—a “big, handsome man with a big laugh” who thrived on good food and good conversation. When he joined his men’s book club, he announced the reason: “I love a good read, and I love intimacy.” Only 66 years old, he was unwavering in his plan: “I’d rather die on my feet than live on my knees….” He did not want the onslaught of his disease to steal his ability to end it all.

Given Brian’s slipping cognition, he asked Amy to find an effective way for him to end his own life without implicating her in a murder. He wanted Amy at his side, and he wanted the method to be peaceful and 100% foolproof in order to avoid catastrophic disability. Amy’s painstaking research uncovered a truth that most Americans do not know: It is simply not possible to end one’s life on one’s own terms in the United States if you have a dementing illness.

Medical aid in dying (MAID) is legal in 10 states and the District of Columbia—areas comprising 22% of the US population—under statutes using language such as “death with dignity” as opposed to the more provocative physician-assisted suicide (PAS). However, all MAID laws in the United States require that a patient have a prognosis of 6 months or less to live and also be competent to make an informed life-and-death decision. Individuals with neurodegenerative diseases are effectively excluded.

Here is where Dignitas (“To live with dignity—to die with dignity”) comes in. Brian said, “I don’t want to end my life… but I’d rather end it while I am still myself, rather than become less and less of a person.” Switzerland is one of the many countries that do not require individuals to be terminally ill to access MAID, but it is the only country in the world where foreigners are eligible—hence Amy and Brian’s trip to Zurich, where Dignitas, a nonprofit organization, is headquartered.

The Dignitas admissions process is arduous and includes extensive paperwork, doctors’ letters, multiple telephone interviews, and dental records for identification after death. Once in Zurich, Brian still had to meet twice with a Dignitas physician to get final approval. At each point, Brian was in charge of the choices. After he and Amy took a car to the Dignitas apartment on the outskirts of town, Brian chose to swallow the prescribed antiemetic followed by sodium pentobarbital. With Amy holding his hand, Brian ended his life, as 3000 others had done before him. For Amy and Brian, access to Dignitas was at once a gift and a tragedy.

How would you have worked with Brian and Amy? Are all suicides the same? Is a thoughtfully planned, accompanied suicide different from a suicide motivated by mental illness and excruciating psychic pain? In Love leaves us with much to contemplate and reflect upon.

The book describes Amy and Brian’s encounters with numerous physicians, 2 of whom Amy says, “are for me the villains of this story”: Brian’s neurologist and psychiatrist, who, along with his internist, “failed him.” For Amy, there is also a hero: her psychiatrist, who interviewed Brian and wrote a decisive letter to Dignitas describing Brian’s life story and mental status. Would you have written such a letter, participating in the Dignitas process and potentially facilitating Brian’s accompanied suicide?

Psychiatric Times™ has been hosting a spirited debate on this topic since 2018, which is summarized in “Physician-Assisted Suicide: A Pressing Question of Ethics and Humanity.”3 In Love is a short but compelling read that is likely to elicit strong feelings on both sides of the debate.

Dr Schildkrout is an assistant professor of psychiatry, part-time, at Harvard Medical School in the Department of Psychiatry at Brigham and Women’s Hospital. She is the author of several books and a blog. Dr Greenberg is an affiliated physician, Beth Israel Deaconess Medical Center; part-time instructor, Harvard Medical School; and fellowship alumna, HMS Center for Bioethics.