During my medical training in the early 1980s, I attended a Grand Rounds on health care reform. Sleep-deprived physicians-in-training are easily conditioned to snooze upright in their auditorium seats, and economics is not an interest of choice for me, but when the speaker told us that there would be no solution to rising health care costs except to fracture the bond between patient and doctor, I found myself engaging in nightmarish fantasies that in subsequent decades have come true. 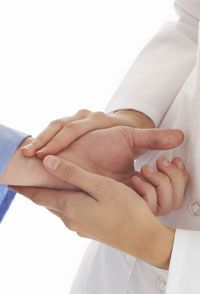 During my medical training in the early 1980s, I attended a Grand Rounds on health care reform. Sleep-deprived physicians-in-training are easily conditioned to snooze upright in their auditorium seats, and economics is not an interest of choice for me, but when the speaker told us that there would be no solution to rising health care costs except to fracture the bond between patient and doctor, I found myself engaging in nightmarish fantasies that in subsequent decades have come true.

Recently, I received a desperate call from a woman with schizoaffective disorder, an illness in the gray zone between schizophrenia and bipolar mood disorder. Several months earlier, her health insurance company had declined to cover her antidepressant in the double dosage that had pulled her out of suicidal depths. After that initial denial, both she and I were told that under no circumstances would the higher dosage be allowed. The fact that she was insured meant that she was ineligible for humanitarian programs that provide free medication. She felt she had no choice but to lower the dosage, and after she did, her mood plummeted.

At the time of her call to me, she had been on a lower dose of the antidepressant for several months and was on the fence between suicide and hospitalization. She recognized that the higher dose would help and asked me to call the company again that manages her prescription benefits, which I did. After the usual automated voice adventure, the company faxed a form for me to fill out. It asked whether she had generalized anxiety disorder (no), major depressive disorder (no, but she met symptom criteria), other (yes, schizoaffective disorder); whether she had failed on therapy for a minimum of 2 months (yes); and whether she had previously achieved remission on the drug (yes, remission of depression on double the dose). I explained that without a higher dosage of the antidepressant she was at risk for suicide and would require emergency hospitalization, which might otherwise be avoided. I faxed back the form and within the hour received a denial letter stating that the patient had been sent a letter telling her that she would not be allowed the higher dose.

This incident took place in 2009, but my first experience with managed care fracturing the physician-patient bond came in 1986, when I saw a young woman for a consultation the week after she was raped, and her insurance company (ironically founded by doctors) declined to authorize further visits. None of my frustrations about the process are new, and I have “opted out” of managed care plans. I understand that the insurance company for the woman who was raped made its profits primarily by reducing services for psychiatric illness. That takes us back to economics.

I listen to economists and politicians speak about the need to stimulate spending. In the same breath, they speak about the need to reduce health care spending. It seems to me that as a society matures, it should spend a greater proportion of gross domestic product on health care. This is exactly what is happening, but as our country makes its way through a trial-and-error adjustment, many are having difficulty paying for their health care. Consequently, we are worried about rising health care costs. But to reduce health care spending should not be a primary goal. The goal should be for the population to be healthy and for the health care economy to be vigorous with balanced supply and demand. There is no good reason to exclude health care from the marketplace.

Managed care has not helped. By inserting itself between the patient and the physician, it has not only frustrated the patient, who still needs care, but has also reduced the physician’s ability and motivation to adjust treatment and costs to the patient’s ability to pay. Ask any physician who has practiced since the 1970s. If anything, we have more employees spending less time with patients. Many practices have 6 employees for every doctor. Nurses, doctors, and direct care workers spend increasingly more time pushing paper, wending their way through voice-mail mazes, and tapping computer keyboards. A study in the March 2008 edition of Academic Medicine reported that physicians-to-be scored progressively lower on tests for empathy each year they spent in medical school.1 The pharmaceutical companies have studied what happens when we spend time with their sales representatives: we prescribe their medications. Physicians really do want to help, but we’re suckers for interpersonal forces, which is usually why we go into medicine in the first place.

I used to joke that medical school was like an incubator for narcissism. The ingredients were impossible tasks: sleep deprivation, grateful patients, the legal ability to give orders, and the role as leader of a team, all cooked in life-and-death drama. Pathological narcissists lack empathy and tend to implode or blame others when criticized. Back to that patient-doctor relationship: time spent in the imperfect human dialogue with patients tends to moderate narcissism. We’re on this scary, touching voyage together-sometimes succeeding, sometimes failing-and we need a clear destination toward which to navigate. We physicians and our patients also need the time with one another to work through the changes we face.

We are faced with a multifaceted problem: a financial crisis; not enough nurses; not enough home health care workers; doctor shortages (how long does it take you to get an appointment?); people out of work; people doing without medical care; people frustrated because their doctors won’t give them enough time to describe their physical or emotional complaints; people who can’t afford to pay their debts. And when, as reported by Himmelstein and colleagues2 in the June 2009 issue of the American Journal of Medicine, 62% of bankruptcies are precipitated by medical debt, it makes little sense to postpone health care reform until the economy improves.

Let’s return to the lecture in which I was told that the only solution to the problem of rising health care costs was to fracture the physician-patient bond. Perhaps rising health care costs are not the problem. Perhaps we should spend more. This is the central point of an opinion piece in the August 17, 2009, Wall Street Journal.3 The author, Craig Karpel, writes, “No one thinks the 20% of GDP [gross domestic product] that’s attributed to manufacturing is weighing down the economy.” Currently we spend about 17% of our GDP or $2.4 trillion a year on health care-but, as Karpel notes, this money “is paid to Americans.” He quotes Stanford economists Robert E. Hall (president-elect of the American Economic Association to serve in 2010) and Charles I. Jones, who report in a 2007 study that their models predict that expenditures on health care in the mid-21st century should optimally amount to 30% of GDP or more.4

The economies of early civilizations were driven by basic material needs for food, clothing, and shelter. During the past 50 years, about a third of new jobs in this country were “directly or indirectly related to housing.” Karpel makes a strong case that once material needs are substantially met, the desire for health care naturally becomes a significant driver of the economy and that “the US health-care [sic] economy should be viewed not as a burden but as an engine of growth.” He ends by exhorting politicians to preserve the ability of Americans to choose life over money.

So the answer is not to further weaken the bond between patient and physician. I don’t pretend to know how to get there, but I see the long-term solution as including a natural migration of the workforce away from unemployment and jobs in sectors of the economy for which evidence demonstrates more harm than benefit and toward providing goods and direct services for which there is need and natural demand.

I’m all for competition in the marketplace, but the bond between health care providers and those they serve is vital. We need universal coverage and a strong public health care option to offer an alternative to the private insurance and managed care system that has tried to break the relationship. We must allow patients the choice to pay for services that exceed coverage restrictions, and we should be care-ful not to promulgate most-favored-nation restrictions or other policies that prohibit physicians from offering charity care or discounts. It is important to allow physicians to know their patients well enough to see and feelthe direct effect of clinical decisions-our mistakes as well as our successes. The reduction of health care spending should not be a primary goal, only a necessary evil in the short run, while we work toward the rational health care system that our country deserves.

Hall RE, Jones CI. The value of life and the rise in health spending.