Review – The Protest Psychosis: How Schizophrenia Became a Black Disease

It is well known that black people, compared to white people, are much more likely to be diagnosed as suffering from ‘schizophrenia’ if they are seen at psychiatric units in the UK or USA. . 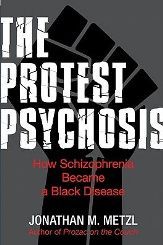 Note: This article originally appeared in h-madness, a blog on the history of psychiatry. Review -- Jonathan M. Metzl, The Protest Psychosis: How Schizophrenia Became a Black Disease (Beacon; 2009). It is well known that black people, compared to white people, are much more likely to be diagnosed as suffering from ‘schizophrenia’ if they are seen at psychiatric units in the UK or USA. This fact has been commented upon and discussed extensively, and often acrimoniously, in the UK but not discussed much in the USA. If this book does not start the discussion going nothing would – and it is high time that it does. The book by Jonathan Metzl is an excellent and sensitive analysis of one of the most important issues in psychiatry when practiced in multicultural settings and possibly in the mental health systems on both sides of the Atlantic.

The arguments in the UK on what is euphemistically called the ‘over-representation of black people in the mental health system’ has focused on a mixture of racism and insensitivity to cultural differences being the underlying issues affecting psychiatry and mental health services in general. Unfortunately some psychiatrists have vehemently opposed the idea that psychiatry may be racist in any way, seeing this as an allegation that psychiatrists are racist individuals. Others have maintained that it is not individual prejudice of psychiatrists, or indeed any group of professionals, that results in this situation but the racism inherent in the system of psychiatry –its ways of going about its business, the effect that popular stereotypes have on the diagnostic process and so on. The proposition advanced generally is of institutional racism in psychiatry.1 The people who oppose this institutional racism theory claim that medical research has failed to detect any racism in psychiatric practice and argue that psychiatrists in the UK are not prejudiced, that the system of diagnosis in modern psychiatric practice is ‘objective’ and so not affected by popular images or subtle racism, and that the depiction of psychiatry as racist has resulted in black people with ‘real’ illness losing out.2

This book from the USA brilliantly traces the way that the schizophrenia diagnosis has changed according to the influences in society at any given time. The author, Dr Metzl, describes how the diagnosis of schizophrenia was used to classify people admitted to Ionia State Hospital in Michigan from the 1940s onwards until it closed as a mental institute in the late 1970s. He discusses the changes in the use of this diagnosis against the context of what happened in society outside the hospital – articles in psychiatric journals, images used in pharmaceutical advertisements, the way schizophrenia itself was recast in the (American) Diagnostic and Statistical Manual (DSM) during the 1960s and 1970s and finally, and most importantly, the impact on the schizophrenia diagnosis of racial politics and the civil rights movement in the USA, especially in Detroit which was part of the catchment are of Ionia Hospital. Dr Metzl found in his research that, until the early 1960s, schizophrenia was largely ‘an illness that afflicted nonviolent, white petty criminals including … women from rural Michigan’; but by the mid-1970s ‘schizophrenia was a diagnosis disproportionately applied to …. [mainly] African American men from urban Detroit.’ Meanwhile, the image of schizophrenia in the USA generally was transformed in the 1960s and 1970s from (being seen as) a psychological reaction and splitting of the functions of personality to one of a disorder of ‘masculinized belligerence.’

In various parts of his book, Dr Metzl discusses the history of race and mental illness in the USA – for instance how absconding from slavery was interpreted as a symptom of mental illness given the name drapetomania3 and how the idea developed during the civil unrest of the 1960s that some beliefs and feelings inspired by ‘Black Power’ represented symptoms of psychotic illness. In fact the main title of the book is taken from the title ‘Protest Psychosis’ given by Bromberg and Simon4 to a paper they published in 1960s on this topic.

Although much of the book is about the past, Dr Metzl draws some very astute conclusions about lessons to be learned and action that should be taken to minimize institutional racism in mental health systems and psychiatric practice. Arguing that ‘focusing on the individual obscures the impact of the structural’ he points out the limitations of the ‘cultural competency’ approach which he believes ‘practically trains doctors to remain blind to ways in which the diagnoses themselves convey profoundly racial and cultural meanings’. He suggests that psychiatrists need to develop what he calls ‘structural competency’ – i.e. competence in understanding the way systems work and the influence that social context has on the process of diagnosis. However, in trying to reconcile these statements with his view that ‘mental illness is real’, the author tends to get into a slight muddle, perhaps by failing to explain what being ‘real’ actually means. Another problem with the book is that it tends to be a bit repetitious at times and the main arguments are sometimes a little difficult to follow. In fact a concise summary of the arguments presented in the book would have been helpful. But on the whole the book is readable and at times quite gripping.

At an academic level, this book is a major contribution to the history of psychiatry and the effect of race politics on psychiatric practice in the USA. But it has much wider importance: It carries a powerful and challenging message not just for psychiatrists but for anyone associated with the mental health system as structured and developed in Europe and North America – i.e. systems informed by Euro-American psychiatry, especially its process of attributing diagnoses. Also, it is a warning to people outside these regions not to take on trust the diagnostic system of western bio-medical psychiatry that is being spread all over the world as ‘scientific’ and ‘objective’, but to adapt and build their services bottom up, using indigenous ways of understanding the human condition, consistent with the social, cultural and political contexts in different regions and countries.5References1. Fernando S. Mental Health, Race and Culture, 3rd Edition. Basingstoke and New York: Palgrave Macmillan; 2010.
2. Singh SP, Burns T. ‘ace and Mental Health; there is more to race than racism. Br Med J. 2006;333:648-651.
3. Cartwright SA. Report on the diseases and physical peculiarities of the Negro race. In: Caplan AC, Engelhardt HT, McCartney JJ, eds. Concepts of Health and Disease. Reading Mass: Addison-Wesley; 1981:305-325.
4. Bromberg W, Simon F. The protest psychosis. Arch Gen Psychiatry. 1968;19:155-160.
5. Fernando S, Weerackody C. Challenges in developing community mental health services in Sri Lanka. J Health Manag. 2009;11:195-208.