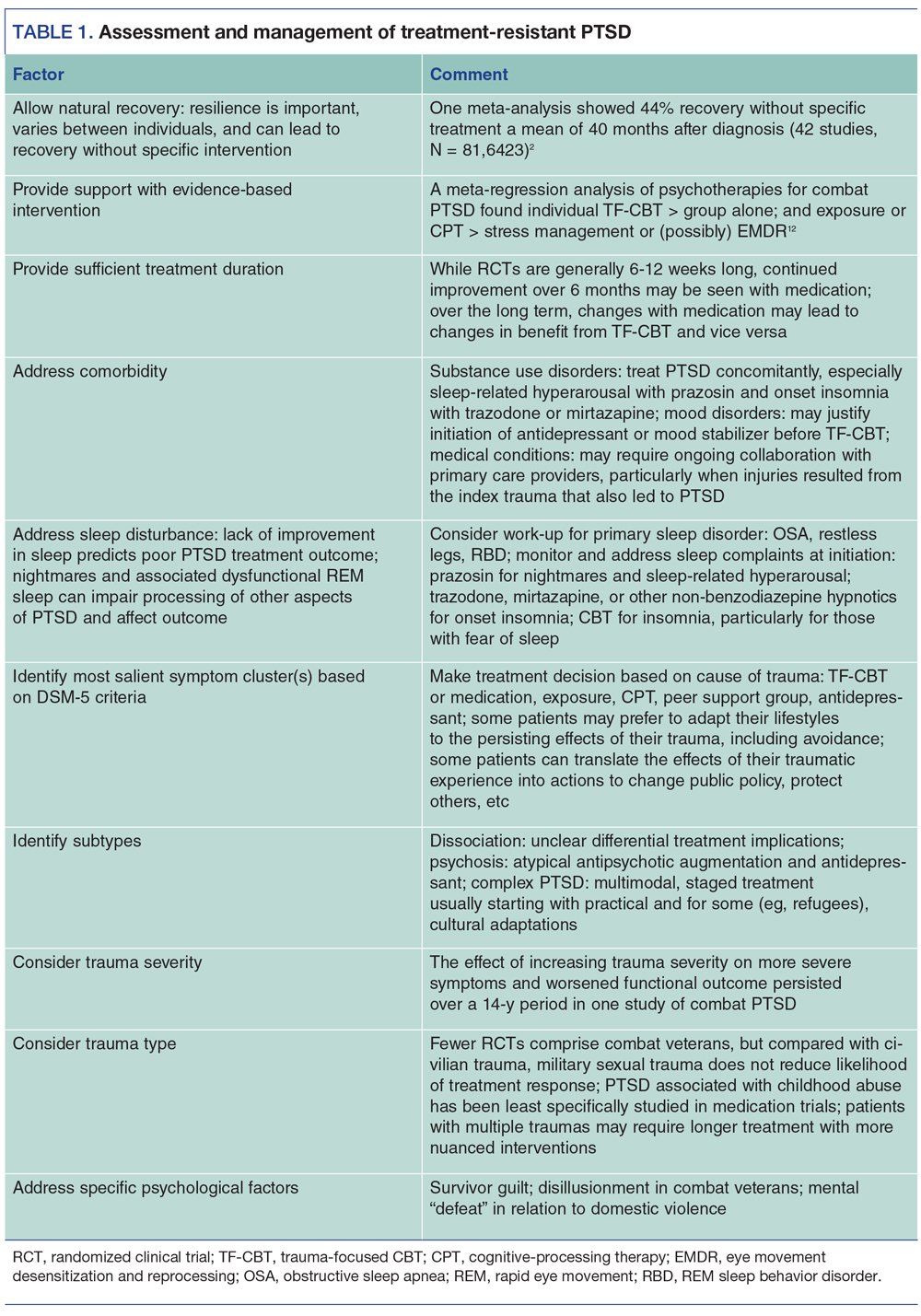 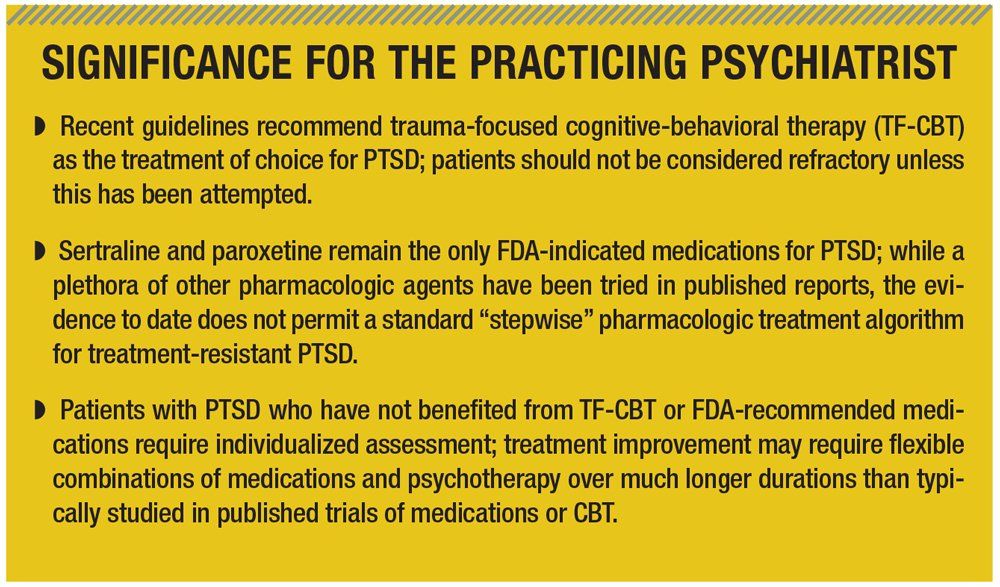 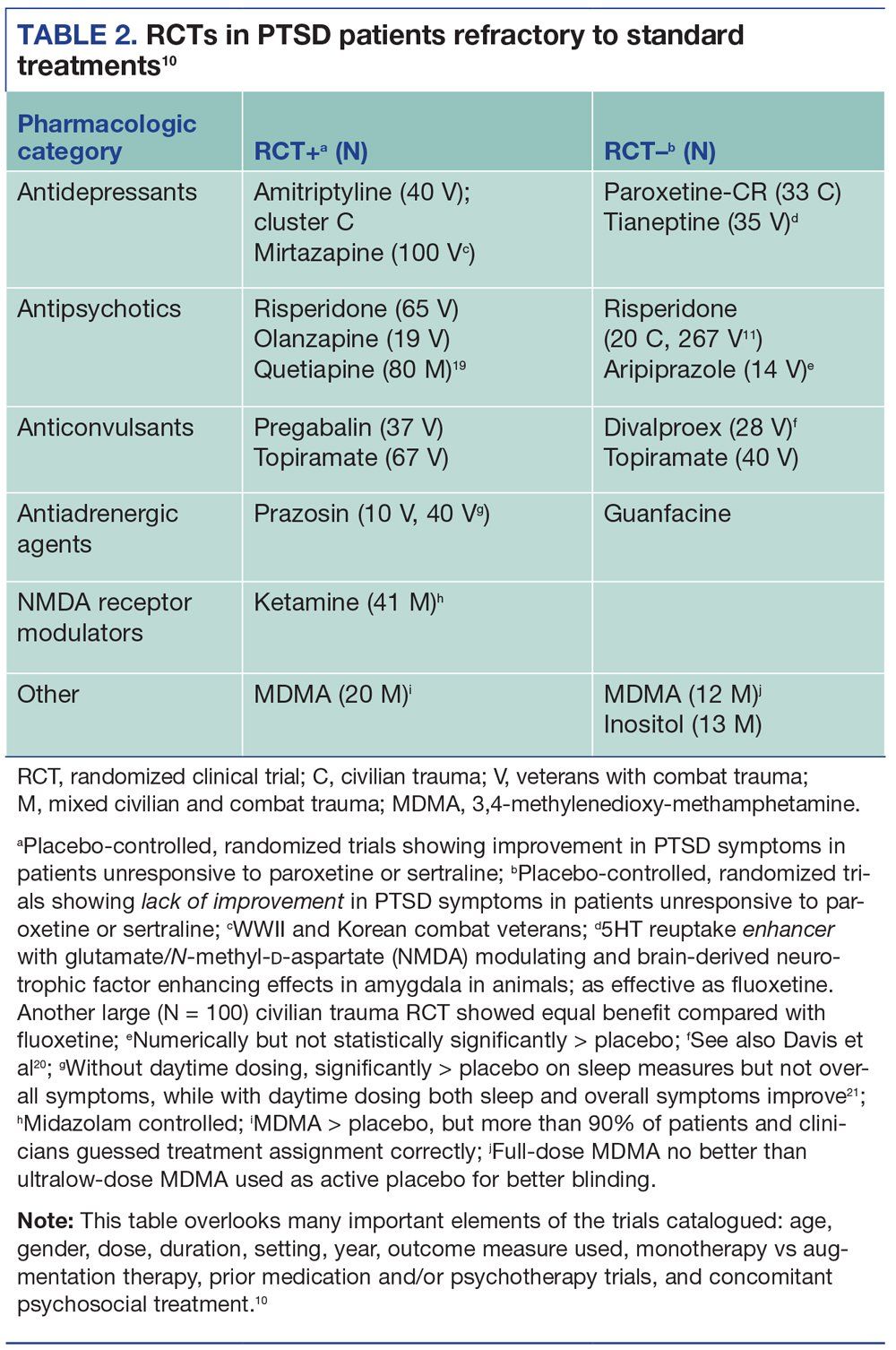 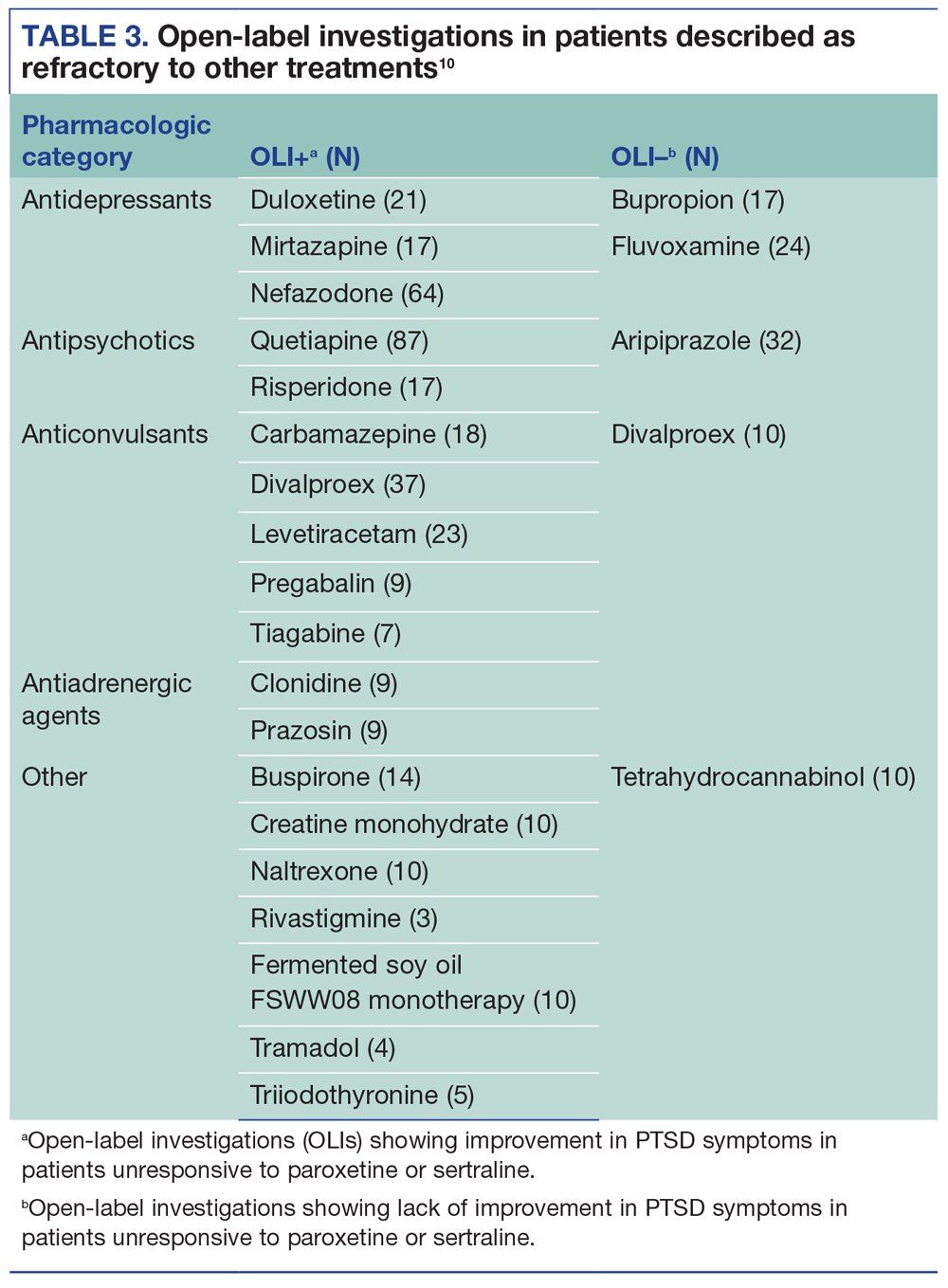 TABLE 3. Open-label investigations in patients described as refractory to other treatments[10]

Treatment-resistant depression has been discussed widely for years, but treatment resistance in PTSD-another common, serious, disabling condition-has been less frequently addressed in the literature. While 70% of the world’s population has been exposed to a traumatic event, only 5.6% meet DSM-5 criteria for PTSD.1 Moreover, 44% of patients with a PTSD diagnosis recover even without specific treatment.2

Trauma-focused cognitive-behavioral therapy (TF-CBT), such as prolonged exposure therapy, cognitive-processing therapy, or eye movement desensitization and reprocessing, has been recommended as first-choice treatment for chronic PTSD.3-6 TF-CBT and non–trauma-focused CBT may be equally effective post-treatment; TF-CBT has been found to be more effective at 1 to 4 months’ follow-up.7 However, there is a high dropout rate from these treatments. Two-thirds of veterans who complete cognitive-processing therapy or prolonged exposure therapy retain a PTSD diagnosis despite large within-group effect sizes7; significant sleep problems often persist, and there are less data about longer-term follow-up.8

Ms. A, 55 years old, has had depression, panic attacks, insomnia, and social withdrawal that have not benefited from trials of citalopram, paroxetine, and sertraline over the past 3 years. At intake, she describes persistent grief for the past 10 years since witnessing the shooting death of her son. She is unable to describe the incident, exhibits the conviction that she is responsible for the death, and has difficulty acknowledging that her child is gone. She persistently re-experiences the traumatic event with a mixture of sadness, anger, and guilt. Her anxiety consists of extreme social avoidance and hypervigilance, and she has frequent nightmares.

Mr. B is a 66-year-old Vietnam combat veteran. Over the nearly 40 years since the Vietnam War, he has been able to work in an administrative position and raise a family, without substance use disorder, serious general medical conditions, or legal problems. On the other hand, besides his work and involvement in a Veterans Service Organization, he has engaged in little social activity with his family or otherwise-no concerts, ballgames, movies, holiday parties, etc. He has undergone multiple unsuccessful pharmacology trials. At presentation, he is taking 200 mg of sertraline and 2500 mg of divalproex daily, and 4 mg of clonazepam and 500 mg of quetiapine daily at bedtime. He has persistent insomnia, severe combat nightmares, angry hyperarousal, and hypervigilance.

Only 2 medications have FDA indications for PTSD: paroxetine and sertraline. Some treatment guidelines recommend these or other antidepressants, including fluoxetine and venlafaxine, as equivalently first choice with focused CBT.9 Others regard focused CBT as having better evidence and suggest antidepressants only when therapy has failed or is not available, or in cases of severe depression.5,9 This reflects a number of negative randomized clinical trials (RCTs) with SSRIs, and small-to-moderate effect sizes relative to TF-CBT.

Many patients remain symptomatic and functionally impaired despite standard treatments and require alternative interventions. In a review of the pertinent literature on treatment-resistant PTSD, it was found that only 53% of 167 RCTs, open-label studies, and case series that assessed the efficacy of medication other than sertraline or paroxetine described failure of prior pharmacotherapies, and only 3% described failure of TF-CBT. The only RCT of an SSRI (paroxetine) in CBT non-responders failed to show benefit. Systematic investigation of CBT in pharmacotherapy non-responders has also received little investigation. The complexity of the literature did not permit specific recommendations about relative benefits of alternative next-step pharmacologic strategies in paroxetine/sertraline non-responders.10

Most experts agree that patients with PTSD and persistent nightmares should not be regarded as treatment-refractory unless they have had an adequate trial of prazosin, which should be a minimum of 10 mg daily at bedtime, with additional daytime dosing in some patients. Prazosin may require careful titration over several months. Anticonvulsants are not supported by strong evidence, although some found the evidence for topiramate more convincing than others.6 I have seen benefit in some patients who have nightmares, although adverse effects are common.

One notable finding-unfortunately unchanged since Hamner and colleagues12 made the same observation in 2004-is that there is a dearth of evidence on lithium in PTSD, including no RCTs. This is unfortunate given associations between PTSD and suicidal behavior, anger dyscontrol, and impulsivity, which are potential targets for long-term lithium therapy. In my experience, both individuals with clear bipolar comorbidity and patients in whom bipolar NOS is more difficult to separate from severe PTSD may benefit.

D-cycloserine has been used as an augmentation strategy to enhance extinction in conjunction with exposure, with largely unimpressive, although complex, results. To date, it has not demonstrated efficacy in treatment-resistant PTSD.

Dunlop and colleagues13 developed the Emory Treatment Resistance Interview for PTSD (E-TRIP). It does not provide an algorithm for next-step treatment but allows the clinician to generate a numerical score for degree of treatment resistance in an individual based on failure of pharmacotherapies and psychotherapies, with RCT data supporting efficacy.

Table 1 addresses some of the complexities in assessing and managing treatment-resistant PTSD. The Case Vignettes also illustrate some of these points. Ms. A’s treatment consisted of psychoeducation about the nature of PTSD followed by prolonged exposure, as well as extensive cognitive-processing therapy that addressed “survivor guilt.” After nearly 2 years, she came to accept her child’s death; recovered from her self-blame; and her depression, hypervigilance, and avoidance improved. Sleep improved with trazodone once her avoidance and hypervigilance responded to exposure. Venlafaxine, 225 mg daily, provided more benefit than SSRIs.

Mr. B required systematic medication changes over 2 years, with a final regimen of 15 mg of prazosin and 30 mg of mirtazapine daily at bedtime plus 300 mg of sertraline and 50 µg of levothyroxine sodium daily (based on exacerbations of comorbid anergic depression correlated with high-normal thyroid-stimulating hormone levels of 3.5 to 4.5 mIU/L from a baseline of 1 to 2.4 mIU/L). With this regimen, nightmares stopped and he slept 7 to 8 hours for the first time in decades. The improvement in sleep and depression permitted in vivo exposure therapy that reduced first avoidance behavior and secondarily anger and hypervigilance. He has remained essentially well now for more than 3 years, even with current doses of 200 mg of sertraline, 15 mg of mirtazapine, and 5 mg of prazosin.

PTSD is relatively unique among psychiatric disorders in requiring a specific etiology. Treatment must first address the specific individualized aspects of the trauma itself and contextualize its role in the patient’s life. Certain types of trauma can reduce the likelihood of spontaneous recovery (eg, PTSD due to medical illness2) or response to treatment: childhood abuse-related trauma, repeated or prolonged trauma, more severe trauma, and trauma associated with marked impairment of self-regulation. Combat PTSD is frequently regarded as less responsive to standard treatments than single-event civilian trauma-associated PTSD.

Comorbid substance use, severe anger dyscontrol, mood disorders, or personality disorders understandably make treatment more difficult and complex. The evidence is mixed on whether compensation seeking per se reduces the likelihood of benefit from treatment. Finally, some traumatic experiences such as disaster or terrorism (which may include losses of significant others, physical injuries, occupational and other practical alterations, or cultural dislocation) usually require interpersonal support and practical interventions.

Different components of the clinical syndrome may respond differently to different interventions. When medications are effective, they usually provide more benefit for intrusive and hyperarousal, than avoidance symptoms. Exposure therapy directly addresses avoidance, which is also improved with other forms of TF-CBT (as are intrusive and hyperarousal symptoms). To date, few trials have utilized DSM-5 criteria, which include additional symptoms (negative alterations in cognitions and emotions) to those in DSM-IV. A recent meta-analysis of 93 RCTs found that treatments effective for PTSD are also effective for improving comorbid depressive symptoms (which overlap to some extent with DSM-5 PTSD Cluster D symptoms).14

Some PTSD subtypes may require specific treatments. PTSD with psychotic features, while not included in DSM-IV or DSM-5, is well recognized and is a better indication for atypical antipsychotic augmentation of antidepressants than PTSD per se.5,15 Complex PTSD, which includes prominent difficulties in self-regulation capacity, may respond to focused CBT but often requires a “staged” approach.

There is no “best” evidence-based treatment for all patients, and this is true for treatment-resistant PTSD. Pharmacologic management must be individualized, and the use of focused CBT in conjunction with pharmacotherapy may require careful, flexible integration, sometimes across months or years of treatment-as in Ms. A’s and Mr. B’s cases. Still, as also illustrated by Mr. B’s case, empirical data summarized in Tables 2 and 3 may be of value in making medication changes.

There are medications with expert recommendations against their use (benzodiazepines), with uniformly negative RCTs (divalproex, bupropion, guanfacine, tiagabine), or with a mixture of both positive and negative evidence (fluoxetine, mirtaza­pine, risperidone and olanzapine augmentation of antidepressants, topiramate). Furthermore, some commonly used pharmacologic agents have not been subject to RCTs in PTSD (citalopram, escitalopram, gabapentin, clonidine, lithium), nor have many newer agents such as levomilnacipran, milnacipran, vilazodone, vortioxetine, lurasidone, iloperidone, cariprazine, and brexpiprazole. Given the challenges in helping people with treatment-resistant PTSD, it was not surprising to find an impressive variety of alternative pharmacologic agents that have shown benefit in at least some treatment-resistant patients (Table 3). Future research may lead to agents that directly address neuropharmacologic mechanisms of extinction in the amygdala including glutamate/NMDA modulators.16 At this time, evidence on the risk-to-benefit ratio for marijuana/cannabinoids does not justify a recommendation for treatment-resistant PTSD.17

In concert with direct neuromodulatory approaches for other refractory psychiatric disorders, some patients have benefited from acupuncture, ECT, repetitive transcranial magnetic stimulation (rTMS), vagus nerve stimulation, transcranial direct nerve stimulation, stellate ganglion block,18 trigeminal nerve stimulation, and amygdala deep brain stimulation. None of these are FDA approved, although investigations are ongoing. The Veterans Administration Department of Defense PTSD Treatment Guideline provides a B level recommendation for ECT and rTMS as treatments for patients with “chronic, severe, medication- and psychotherapy-resistant PTSD.”4

While RCTs of medications typically involve weekly to bimonthly follow-up visits, and prolonged exposure therapy and cognitive-processing therapy require weekly visits for standard implementation, for many patients, such frequency of visits is limited by practical considerations (eg, cost, work obligations). This was true for Ms. A and Mr. B. For many patients like Ms. A and Mr. B, who have suffered for years, it may not be surprising to find that medication changes may take months or longer to achieve optimal benefit, and some components of focused CBT involve changes in maladaptive habits, ingrained after trauma, that take time to implement.