With aging, a multitude of medical conditions can occur and/or existing conditions can be exacerbated, contributing causally to or amplifying neuropsychiatric comorbidities. 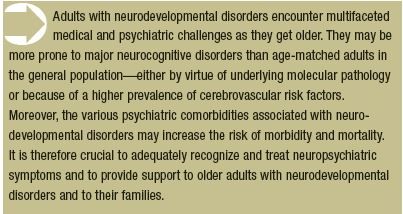 Older adults with neurodevelopmental disorders constitute a growing segment of the population as overall life expectancy increases. With aging, a multitude of medical conditions can occur and/or existing conditions can be exacerbated, contributing causally to or amplifying neuropsychiatric comorbidities. Part 1 of this article covered fragile X–related disorders, including X syndrome and fragile X–associated tremor/ataxia syndrome.1 Here we discuss autism spectrum disorders, Down syndrome, and 22q11.2 deletion syndrome (22qDS).

The prevalence of autism spectrum disorders in the general population has been estimated to be 2.24%, with a male to female gender ratio of 4 to 1.2 Compared with controls, adults who have an autism spectrum disorder are at significantly increased risk for all major psychiatric disorders, including anxiety, depression, bipolar disorder, obsessive-compulsive disorder, schizophrenia, and suicide attempts.3 In addition, the prevalence of medical conditions (eg, diabetes, hypertension, hyperlipidemia, obesity, sleep disorders, vitamin deficiencies, stroke, and Parkinson disease) is higher among such patients.

Most individuals who have an autism spectrum disorder need various degrees of support throughout their adult life, and their quality of life decreases over time. As they age, two-thirds of adults with severe symptoms have a poor outcome.4 Moderately disabled individuals often live in residential facilities and require family support; high-functioning adults may live independently, are employed, and strive toward meaningful relationships.4,5

Down syndrome, most often caused by trisomy of chromosome 21, is the most common genetic disorder, affecting about 1 of 750 to 1000 live births.7 Persons with Down syndrome present with complex congenital cardiac malformations, intellectual disability, and anomalies in other organ systems, including digestive, musculoskeletal, urinary, and respiratory systems. Psychiatric comorbidities include anxiety, behavioral disturbances, and depressive symptoms.8 Moreover, Down syndrome is a known risk factor for Alzheimer disease.

The overexpression of genes located on chromosome 21, such as the amyloid precursor protein gene, leads to accumulation of Î²-amyloid with formation of amyloid plaques. In addition, middle-aged adults with Down syndrome develop neurofibrillary tangles, white matter disease, and cerebrovascular pathology-all of which can contribute to neurocognitive disorders. By age 40, most adults with Down syndrome have amyloid plaques and neurofibrillary tangles in numbers sufficient to support a neuropathological diagnosis of Alzheimer disease.9 About 15% of 45-year-olds with Down syndrome have Alzheimer disease, and the prevalence doubles every 5 years.9 Although the age of onset of Alzheimer disease in individuals with Down syndrome is earlier than in the general population (typically, 65 years or older) and the cognitive baseline and overall level of functioning differ between these 2 groups, their cognitive profiles are quite similar.

22qDS (ie, velocardiofacial or DiGeorge syndrome) is caused by hemizygous microdeletions on the long arm of chromosome 22. Its prevalence is estimated at approximately 1 of every 4000 live births.10 Individuals with 22qDS may have abnormal facies, cleft palate, congenital heart disease, neuromuscular problems, thymic aplasia leading to T-cell immune dysfunction, hypoparathyroidism, and hypocalcemia. Most persons with 22qDS have cognitive deficits, specifically in the domains of sustained attention, executive function, memory, and visuospatial skills.10

With regard to intellectual functioning, most individuals score in the borderline IQ range: some reach low average IQ, while others have mild intellectual disability. A large study examined psychiatric comorbidities in 1402 participants with 22qDS, aged 6 to 68 years.11 The most common psychiatric diagnosis was ADHD (37%), noted to be more frequent in males; females had more anxiety and depressive disorders.10,11

Confirming previous results, which consistently show a strong association of 22qDS with schizophrenia, Schneider and colleagues11 found that 41% of adults over age 25 had psychotic disorders. The prevalence of autism spectrum disorders in patients with 22qDS is 11%, which is higher than in the general population.12 An association of 22qDS with early-onset Parkinson disease has been reported; therefore, it is recommended that patients with this neurodevelopmental condition be monitored for the emergence of parkinsonism.13 The Table summarizes the cognitive and psychiatric manifestations in older adults with neurodevelopmental disorders.

Cholinesterase inhibitors (donepezil, galantamine, and rivastigmine) and the NMDA antagonist memantine have been used off-label for persons with Down syndrome who have Alzheimer disease, although there is insufficient evidence to support this approach.14,15 More research is needed to identify effective treatments for neurodevelopmental disorders in late life.

The majority of adults with neurodevelopmental disorders are physically, emotionally, and financially dependent on their families throughout their lives; many are cared for at home by unpaid family caregivers. Clinicians should be vigilant and assess for caregiver burden at every visit and be familiar with local and national resources that can provide support and respite to families.

The project described in this article was supported by the National Center for Advancing Translational Sciences, National Institutes of Health through grant number UL1TR000003 and linked award TL1 TR000133. The content of this article is solely the responsibility of the authors and does not necessarily represent the official views of the NIH.

Acknowledgment-The authors acknowledge the American Association for Geriatric Psychiatry (AAGP) for helping to bring this article to fruition. The AAGP is a national association representing and serving its members and the field of geriatric psychiatry. The AAGP promotes the mental health and well-being of older people through professional education, public advocacy, and support of career development for clinicians, educators, and researchers in geriatric psychiatry and mental health.

Dr Seritan is a Health Sciences Clinical Professor in the Department of Psychiatry, University of California, San Francisco, San Francisco, CA. Mr Ligsay is a medical student at the University of California, Davis School of Medicine, Sacramento, CA. Dr Hagerman is Distinguished Professor and Endowed Chair in Fragile X Research in the Department of Pediatrics, University of California, Davis Medical Center, Sacramento, CA, and Medical Director of the Medical Investigation of Neurodevelopmental Disorders (MIND) Institute, Sacramento, CA. Dr Seritan and Mr Ligsay report no conflicts of interest concerning the subject matter of this article; Dr Hagerman reports that he has received support from the NIH for genotype-phenotype study in fragile X premutation disorders.