Recovery from addiction does not protect against normal life events...

TALES FROM THE CLINC

In this installment of Tales From The Clinic: The Art of Psychiatry, we follow the story of a young man who turned his life around for the sake of his spouse and child, but nevertheless struggled with the tribulations of normal upheaval. Recovery from addiction does not protect against normal life events, but our patients are more sensitive to stress than their nonsubstance user counterparts, increasing the potential for stigmatization. We visit the moral versus brain disease model of addictive processes through the case, and hope to help readers appreciate their own biases and open themselves to understanding the neurobiology of addiction. The aim of proper diagnosis and treatment is to have an objective conception of addiction rather than a morally framed conversation, when behaviors related to addiction are viewed through a negative prism.

“Mr Wallace” is a young man with opioid use disorder and major depressive disorder. He lost contact with his wife and young child as a consequence of his opioid use. His wife moved to another country, prompting him to get treatment “like I really mean it this time.” He gained sobriety on medication-assisted treatment (buprenorphine/naloxone) and did well, earning advanced certification in his field and increasing his earnings significantly. He also took up the hobby of synthetic music. His wife returned with their child, with subsequent stabilization of the relationship, the purchase of a house, and other life milestones.

The National Institute on Drug Abuse (NIDA) defines addiction as “a chronic, relapsing brain disease that is characterized by compulsive drug seeking and use, despite harmful consequences. It is considered a brain disease because drugs change the brain—they change its structure and how it works. These brain changes can be long lasting, and can lead to the harmful behaviors seen in people who abuse drugs.”1 Although NIDA adheres to the brain disease model of addiction (Figure 1), there continues to be controversy surrounding whether addiction is a disease or a matter of choice. If addiction is viewed as a moral failing, as posited by the moral model of addiction, then there is the belief that the patient is responsible for their substance use and at fault for having a character defect or a weakness of will. 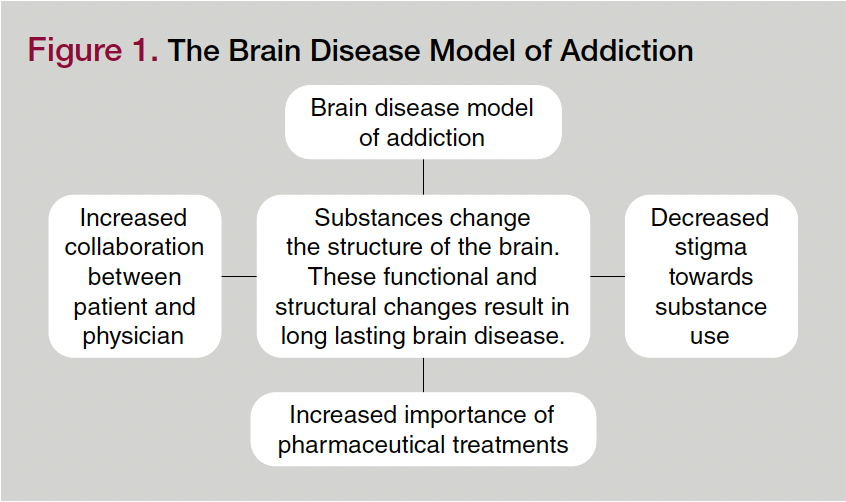 Advancements in neuroscience have made it possible to identify strong genetic, neurodevelopmental, and sociocultural components of addiction. Evidence pointing to the activation of reinforcement circuits (Figure 2) by drugs through the neurotransmitter dopamine in brain areas, such as the nucleus accumbens and ventral tegmental area, further supports irreversible changes in the brain’s structure and function resulting from substance use.2 Because of these permanent changes, it is postulated that individuals cannot exercise self-control over their behavior pertaining to addiction. 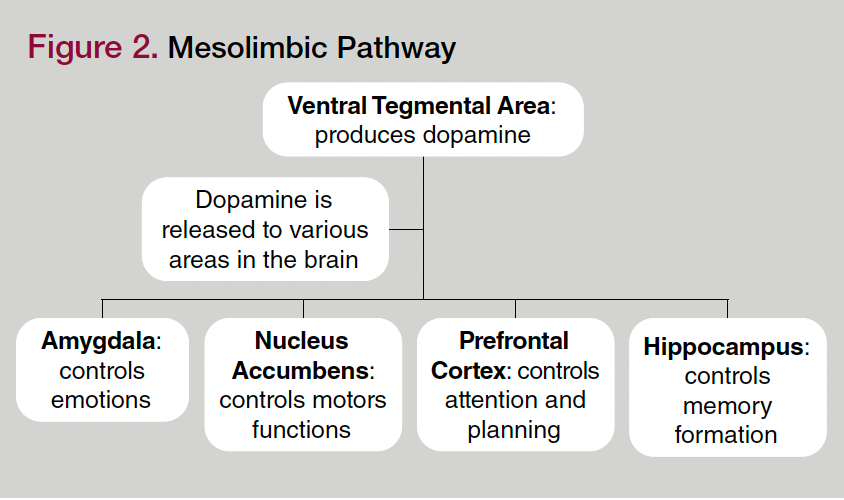 This biological approach, supported by animal models of addiction,3 has made room for pharmaceutical treatments of substance use disorders. This approach also supports liberation from the belief that addiction is a moral lapse in individuals who have deep character flaws. The disease model of addiction has often been assumed to diminish the attribution of free will to those with drug addictions, which could possibly have significant implications in the attribution of responsibility and stigma as well as the acceptance of treatment.4

Opponents of the brain disease model of addiction believe it: is insufficiently supported by animal-model and neuroimaging data; has only a modest impact on public policies toward drugs and addiction; and has not majorly contributed to the development of more effective treatments despite the decades of research.8 Evidence to support environmental approaches to reducing substance use cautions strongly against the possibility of policy makers and government officials being enticed by the allure of neuroscience. There is some concern that an overly biological emphasis on addiction could take attention away from the necessary social and environmental interventions and divert resources to the production of expensive and perhaps risky medical interventions that can realistically only be accessed by a certain population.

Proponents of the brain disease model of addiction postulate that adherence will encourage seeking of evidence-based medical assistance to overcome a brain disease. They believe this model lends itself to a collaborative approach between patients and physicians against addiction. However, critics believe the brain disease model of addiction lends itself to addicted individuals absolving themselves of personal responsibility. This results in infantilizing individuals with addictions while shifting the responsibility of overcoming addiction to medical professionals.4 This stark difference in how each model contributes to the physician-patient relationship sheds light on the topic of countertransference (Figure 3).

Figure 3. The Brain Disease Model of Addiction and Countertransference

Mr Wallace later found out—after buying the house, buying a car, and moving back in with his wife and child—that his wife had not been faithful. This led to significant use of Adderall by Mr Wallace and ongoing relationship issues. He continues to have interpersonal issues in the relationship and struggles with maintaining the relationship for the sake of keeping access to his daughter.

As in all cases of countertransference, not only does the relationship between the clinician and the patient play a role, but so do the thoughts, beliefs, and experiences of the physician. Besides the brain disease model of addiction, there are several other models that seek to explain the development of substance use. The moral model describes addiction as resulting from a character flaw or moral failing; the choice model sees drug use as a voluntary but harmful behavior; and the psychosocial model regards substance use as related to economic, cultural, and other social factors.9

From studies on treatment providers’ views on the brain disease model of addiction, there seems to be overall support for this concept, although with variations noted among different professions of providers. The strongest support was generally seen in psychiatrists, especially those who were older.9 Interestingly, there was significant evidence of an amalgamation of beliefs, with providers expressing support for multiple models and levels of patient responsibility. These findings extended from treatment providers to treatment settings as well, with examples provided of substance as a “self-induced disease,” bringing together the requirement for medical treatment with responsibility for the initiation and resolution of use belonging to the individual.9 This appears to reflect the complexity of substance use and its treatment, and suggests that the conceptualization of substance use may be tailored to the needs of a particular patient or to the needs of the patient population seeking treatment in a specific setting.

How a physician conceptualizes substance use plays a role in the countertransference experienced. Thinking a patient is willfully making bad choices will obviously decrease positive feelings or wanting to help them, or to go the extra mile in treatment planning. On the other hand, approaching substance use from the brain disease model of addiction helps patients overcome stigma and reduce guilt, as use is not conceptualized as a moral failure of the patient. This may help reduce negative countertransference toward patients with substance use by assisting in understanding frustrating, demanding, or confrontational behavior as not intentional or specifically directed at the provider. Negative countertransference could result in direct consequences, such as avoidance of the patient, difficulty with empathetic responses, and sessions cut short.10

This could also increase protective or parental feelings toward patients, especially if they are viewed as helpless against the structural and chemical factors that contribute to their use.10 Such a “positive” countertransference can also lead to difficulty in the therapeutic relationship, as the clinician may take on the role of a parent, becoming overly engaged, protective, and permissive. If the patient then regresses and begins to act out or relapses, the clinician may feel betrayed and subsequently have difficulty in future encounters with the patient. A parental countertransference may also result in the clinician infantilizing the patient and minimizing their strengths and abilities.10 As with all forms of countertransference, the ability to identify and label the ensuing emotion is as critical as the adjustments the clinician must accordingly make.

Although there are many frequently underutilized medications for substance use disorder, a mainstay of treatment relies on naturalistic options such as Alcoholics Anonymous, Narcotics Anonymous, inpatient and outpatient rehabilitation programs, and similar offerings. The Anonymous groups generally involve a 12-step approach that includes concepts of acknowledging addiction as well as the difficulty in overcoming it, recognizing wrongs, making amends for those shortcomings, committing to a life with continued focus on sustained abstinence, and working to help others, especially those experiencing similar struggles with substance use (Figure 4).11 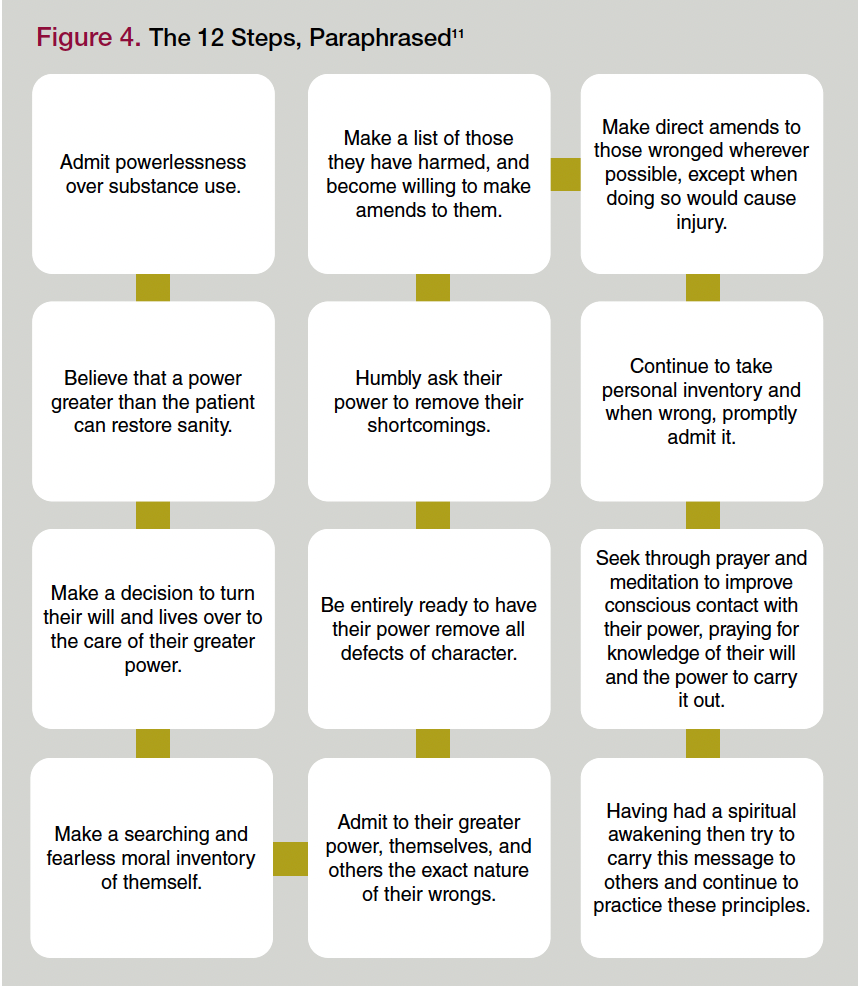 Historically, and continuing in the present day, these programs tend to have a strong spiritual component to them, which can be off-putting for some individuals and make it harder to engage. Of the limited data available, there is evidence for the beneficial effect of involvement in 12-step programs for maintaining sobriety, both with and without attending a rehabilitation program. The impact seems to be strongest for those who started attending 12-step groups prior to entering a rehabilitation program and who continued to be involved after completion of rehabilitation. Most of the available evidence is in regard to alcohol use, with less data focused on other substances.

Medicine is far from the conceptualization of addiction as a sin, yet the belief in biological models still lags considerably, as evidenced by suboptimal prescribing of anti-craving medications. In general, evidence-based practices for addiction treatment are still not fully implemented at the scale they could be, and this is likely reflective of how addictive diseases are conceptualized in everyday practice.

4. Racine E, Sattler S, Escande A. Free will and the brain disease model of addiction: the not so seductive allure of neuroscience and its modest impact on the attribution of free will to people with an addiction. Front Psychol. 2017;8:1850. 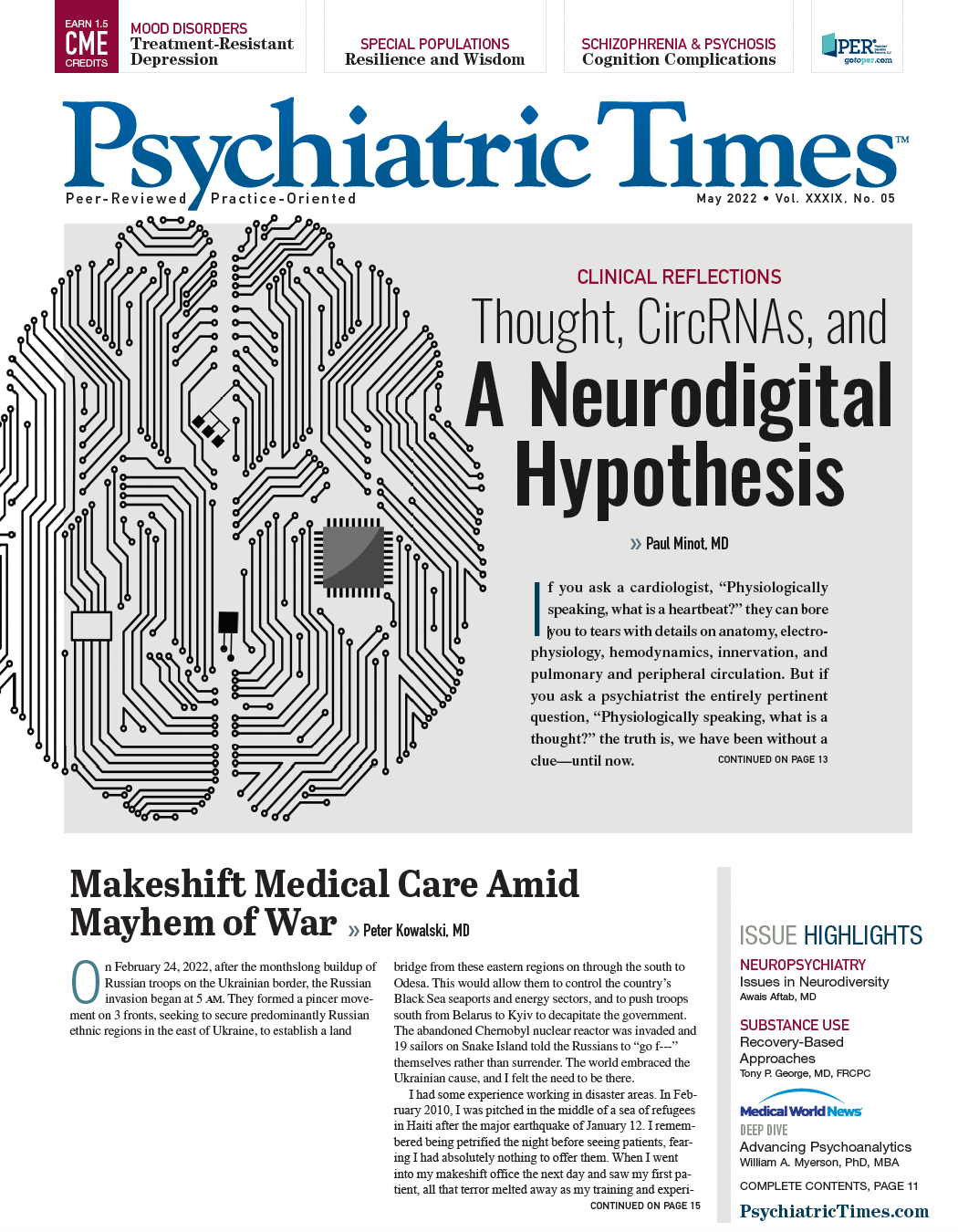 Dual Diagnosis: Double the Stigma, Double the Trouble
Cannabis Legalization: What Psychiatrists Need to Know
Nonabstinent Recovery From Alcohol Use Disorder
Substance Misuse in College Students
Recovery-Based Approaches and Forward-Thinking Policy: Implications for Addiction Care
Neurodiversity and the Social Ecology of Disability
Prolonged Grief Disorder: The Derailed Grief Process
Medicine Beyond the Binary
The Face of Courage and Leadership
Astonished by How Much There Still Is to Learn and Do
Physicians Point to SDOH as Area of Improvement for Health Care
I Cursed Him
Normal Life Stress, They Say…
Drug-Drug Interactions in Patients with Bipolar Disorder
Under the Influence: Misuse of Apetamin, the Illicit Social Media Weight-Gain Drug
Related Videos
Related Content