The Potential for Rational Adjunctive Anti-Inflammatory Therapy in Schizophrenia: Quenching the Fire?

There is renewed interest and enthusiasm for the potential pathophysiological role of inflammation and immune dysfunction in patients with schizophrenia, with evidence for abnormalities in the blood, CSF, and CNS. 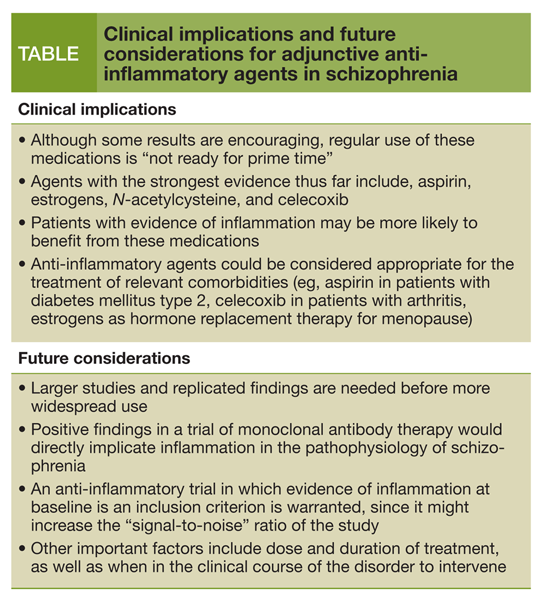 Symptoms, then, are in reality nothing but a cry from suffering organs.
-Jean-Martin Charcot (1825-1893)

How often are patients with essential hypertension, diabetes mellitus, or HIV infection managed with pharmacological monotherapy?

For many chronic diseases, polypharmacy is the rule rather than the exception. But a common feature of polypharmacy is the use of medications with different mechanisms of action. Furthermore, the medication “cocktail” is often rationally tailored to the individual patient based on comorbidities. So, for example, a patient with essential hypertension and comorbid congestive heart failure and diabetes mellitus might be treated with an antihypertensive regimen consisting of a Î²-blocker and an ACE inhibitor or angiotensin II type 1 receptor blocker.

Although many different adjunctive pharmacological strategies in schizophrenia have been tried, at present all are used “off-label.” We need and have to strive for new treatments that confer clinically significant improvement for our patients!

There is renewed interest and enthusiasm for the potential pathophysiological role of inflammation and immune dysfunction in patients with schizophrenia, with evidence for abnormalities in the blood, cerebrospinal fluid, and CNS.1 Furthermore, in recent years there has been a growth of randomized controlled trials (RCTs) of treatment with anti-inflammatory agents, given as an adjunct to antipsychotics. Sommer and colleagues2 performed a quantitative review of 26 RCTs of adjunctive anti-inflammatory agents in schizophrenia; they found evidence for significant clinical improvements with aspirin, estrogens, and N-acetylcysteine.

Another meta-analysis of 8 studies (3 of which were unpublished reports) of adjunctive NSAIDs (aspirin and celecoxib) in schizophrenia found trend-level superiority for NSAIDs over placebo, but efficacy was moderated by several factors, including the clinical status of the patients.3 Note, however, that in 2 studies included in this meta-analysis, baseline blood levels of cytokines, key regulators of inflammation, predicted response to adjunctive NSAID treatment.4,5 Essentially, patients who were more “inflamed” at baseline were more likely to improve with NSAIDs.

These trials raise the possibility that anti-inflammatory agents may have antipsychotic properties. The observation that blood cytokine levels may predict response to adjunctive NSAIDs also supports the plausibility of a pathophysiological role for inflammation in some patients with schizophrenia. This highlights the potential for a paradigm shift in pharmacotherapy for schizophrenia, and a flood of questions follow. Which patients are most likely to benefit, and at what point? What adjunctive agent(s) should be used? At what doses and for how long should anti-inflammatory treatment continue?

But let’s not get ahead of ourselves. There are a number of limitations of this literature. Generally, the sample size of trials of adjunctive NSAIDs has been modest. Findings for some agents are not replicated, and some studies have had negative results. Another important consideration is that the agents investigated have relevant off-target (ie, non-immune) effects. Currently, several humanized monoclonal antibodies against different cytokines are FDA-approved for the treatment of rheumatoid arthritis. An important feature of these agents is that they do not have any relevant off-target effects. This raises an intriguing opportunity in the treatment of schizophrenia. A change in symptoms and/or cognition in response to monoclonal antibody therapy would further (and directly) implicate inflammation in the pathophysiology of schizophrenia.

In a seminal study, Raison and colleagues6 performed an RCT of adjunctive infliximab-a monoclonal antibody against the inflammatory cytokine tumor necrosis factor Î±-versus placebo in 60 patients with treatment-resistant depression. The authors did not find an overall difference in the change in depression scores between treatment groups, but there was a significant time by group interaction favoring infliximab-treated patients with elevated baseline high-sensitivity C-reactive protein-an acute phase protein and marker of inflammation. These findings highlight another important limitation of previous anti-inflammatory trials in schizophrenia: namely, evidence of inflammation at baseline has not been an inclusion criterion, which might affect trial outcomes. It would behoove the field to conduct an anti-inflammatory trial exclusively in “inflamed” patients, since this group may be more likely to respond to treatment.

Another important consideration is the timing of adjunctive anti-inflammatory therapy during the course of the disorder. In several meta-analyses, my colleagues and I found that some inflammatory and immune parameters may be abnormal during periods of acute psychosis (including the first episode) but not during clinical stability.7,8 By contrast, other immune and inflammatory parameters may be abnormal regardless of clinical status. That inpatient and first-episode status moderated the efficacy of adjunctive NSAIDs in the meta-analysis by Nitta and colleagues3 is broadly consistent with these observations. Duration of treatment is also an important consideration, given risks of certain complications, such as GI bleeding and cardiovascular mortality associated with anti-inflammatory therapy. These are important factors that also warrant further investigation.

As detailed above, there is much work to be done to vet this hypothesis. Clinical implications and future considerations are highlighted in the Table. But these findings begin to create a vision of rational adjunctive anti-inflammatory therapy to “quench the fire” in schizophrenia. Perhaps one day, some patients with schizophrenia and evidence of inflammation will be treated with an antipsychotic regimen consisting of a dopamine D2/serotonin-2 antagonist and an anti-inflammatory agent. As a psychiatrist and schizophrenia researcher, this vision gives hope to me and to my patients. In the words of Andy Dufresne in The Shawshank Redemption, “Hope is a good thing, maybe the best of things, and no good thing ever dies.”