After 40 Years (in the Wilderness), Where is Our Promised Land?

I just attended the 40th year reunion of my medical school class at Yale. As is common at these 5-year reunions, we compare our careers and the progress of medicine, although this time more of the focus seemed to be on our personal lives and our new Medicare cards. 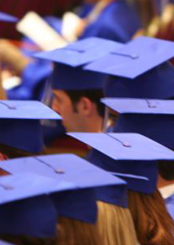 The mind is its own place, and in itself can make heaven of hell, and hell of heaven.
–John Milton, Paradise Lost

I was so much older then, I’m younger than that now.
–Bob Dylan, song My Back Pages

I just attended the 40th year reunion of my medical school class at Yale. As is common at these 5-year reunions, we compare our careers and the progress of medicine, although this time more of the focus seemed to be on our personal lives and our new Medicare cards. We had been a particularly close class, composed of a high percentage of psychiatrists.

As it happens, on the weekend before we left, in Torah study we discussed the 40 years of wandering that the Jewish people did in the “wilderness” before they entered the “promised land” of Israel. As we interpreted the Torah passage, somewhat like we make interpretations in psychotherapy, our leader pointed out that very quickly we had received the Ten Commandments, followed by numerous laws that we were supposed to follow. Then came the many, many years of wandering where our commitment to the laws were tested and a new generation emerged that did not come out of slavery. All kinds of sibling conflict, marital strife, pathological narcissism, and group hysteria were described, all not unfamiliar still in our time. Moses, who led the Jewish people, was to die before they entered Israel.

Early on in our medical education, we received our equivalent of the Ten Commandments, the Hippocratic Oath. This was supplement by the Ethical Principles of the American Medical Association. Our “laws” were what teachers and books taught us about how to diagnose and treat. Sometimes our work was so long and arduous, and included so much “scutwork,” that we felt we were being treated a bit like slaves.

In 1971, we graduated and then left to wander and be tested as physicians. One classmate, who had committed suicide, tragically did not make it. As we described our careers and lives ever since then, we took many individual routes. So did our specialties. Many areas of medicine achieved extraordinary advances and seemed to enter a “promised land” of deeper knowledge and more successful treatments. We heard about some of that from alumni presentations. For instance, there were presentations on “Stem Cells and Regenerative Medicine: Progress and Prospects” and “From Bench to Clinic: Pediatric Tissue Engineered Grafts.”

By comparison, however, psychiatric and mental health care advances seemed to be much slower and the obstacles larger. Stigma remains intense; President Kennedy’s community mental health system was dismantled by President Reagan, and managed care early on honed in on psychiatry. Research was challenged by the complexity and difficult access of the brain compared with other organs.

Many of our newer treatments were variations on the same themes. Modern “antidepressants” seem to be refinements of the tricyclics I first used (and still do). The popularity of Valium, aka “mother’s little helper,” was replaced by the related Xanax. Perhaps akin to traditional religion being supplemented by reforms, typical “antipsychotics” were partially replaced by the expensive “atypicals,” though only clozapine seems to be uniquely more effective. Lithium, a naturally-occurring salt, was discovered to be helpful for “manic-depressive” disorder early in this generation. In more recent times, it has been touted as a possible preventive agent for suicide risk. Psychoanalysis and psychodynamic psychotherapy have been overtaken by the quicker, and deceptively simpler, Cognitive Behavioral Therapy (CBT). Yes, we did describe and refine our understanding of PTSD after the Viet Nam war, but it remains perhaps the most difficult disorder to treat.

At its best, then, these last 40 years of wandering can be thought of as a period of consolidation.

Interestingly, if we reflect back even further to the prior 40 years, from 1931-1971, then we recall the rapid growth and expansion of psychiatry in the USA. Freudian psychoanalysis gained a strong foothold and led to the development of academic departments of psychiatry. By the 1950s, new and more effective medications were discovered by serendipity, starting with Thorazine. All this made it possible to start getting patients out of indefinite stays in state hospitals. Insurance coverage improved. Psychoanalytic insights were even applied to societal problems like crime, divorce, and war, but fell far short of expectations.

As we enter the next 40 years, we may find that psychopharmacology will suffer the same fate as psychodynamics. Moreover, human behavior, much of it driven by older evolutionary needs, threatens our survival from a nuclear disaster and climate instability. What, then? Can we reach the internal “promised land” of our mind? Perhaps.

Certainly, we have some new treatments, such as Vagal Nerve Stimulation and Transcranial Magnetic Stimulation. But, like our medications, these seem more like refinements of something old, ECT. Brain implants are being tested instead of the older and cruder lobotomies. We’re looking at new neurotransmitters, like glutamate, but that seems to be another variation on the same theme. We are almost ready to produce a new diagnostic manual, but as my fellow blogger has pointed out, whether that will be an advancement seems questionable. The recovery movement for the most seriously ill is gaining more steam, but is that mainly because we have less and less funding for other treatments?

It may be new tools for understanding that will lead to more novel treatments and benefits. Currently, we have ever more sophisticated neuro-imaging and neuro-genetics that may lead to new knowledge and treatments. Computers are becoming more sophisticated in supplementing our knowledge base and monitoring our behavior. New technology that uses practical feedback loops has promise in helping us to regulate our dangerous tendencies (see cover story of July, 2011 issue of Wired). Quantum entanglement may offer deeper ways to understand relationships and serendipity. Then, again, optimism seems to be hard-wired for us humans, so maybe I’m being overly optimistic.