This essay is a brief update on an earlier Psychiatric Times article by Dr James Phelps. Several major studies have appeared since the publication of the original article, which shed further light on this issue. 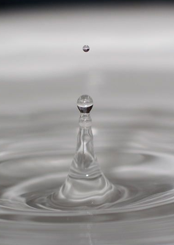 In some circumstances, light is more easily understood as particle, a photon; in other settings, light behaves more like a wave. This dual nature of light has been understood as part of a broader “complementarity” of physical phenomena for decades.1

Psychiatry, on the other hand, continues to struggle with a similar duality: is bipolar disorder a thing, like a photon? Can we use a system of categories, like Linnean classifications, to characterize it and differentiate it from similar phenomena? Or is it more of a continuous phenomenon, akin to a wave version of light? Indeed, just as we have names for nodes on the continuous electromagnetic spectrum (red, green, blue), is bipolarity better understood as a spectrum of entities, with names for nodes on this continuum (eg, Bipolar I, Bipolar II, Bipolar NOS, agitated depression, recurrent unipolar depression)?

This essay is a brief update on the 2006 Psychiatric Times article, Bipolar Disorder: Particle or Wave? DSM Categories or Spectrum Dimensions?2 Several major studies have appeared since the publication of the original article, which shed further light on this issue.

Overdiagnosis?
Mark Zimmerman and colleagues published a series of papers based on the diagnoses offered patients by Brown University area clinicians (“Have you ever been told you have bipolar disorder?” the research team asked). All patients received a Structured Clinical Interview for DSM-IV criteria as the “gold standard” against which these prior diagnoses were compared.

As reported in the Los Angeles Times after these data were presented at the 2008 meeting of the American Psychiatric Association, Dr Zimmerman said of their results “In about half of patients previously diagnosed with bipolar disorder, we couldn’t confirm the diagnosis.”3 He was being generous: as shown in Figure 1, 56% (82 of 145 patients) were overdiagnosed. 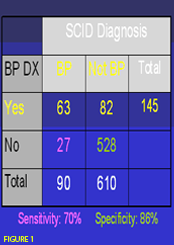 Figure 1 shows the rest of the story, which was made quite clear in the subsequent published article: sensitivity of the Brown area clinicians was 70% and specificity was 86%.4 Compare the sensitivity of a fecal occult blood test for colon cancer, as an example of typical ranges for these figures in other branches of medicine: sensitivity is 67%, with 91% specificity. Thus, by this comparison at least, the Brown University area clinicians were not dramatically over or under diagnosing bipolar disorder, even though a narrow look at one subset of the results might suggest so.

Underdiagnosis?
Roughly concurrent with the Brown University study was the BRIDGE international collaboration led by Jules Angst.5 The researchers compared underdiagnosis rates in primary care clinics (patients who were diagnosed as having major depressive disorder (MDD) who on re-examination met criteria for bipolar disorder) based on DSM-IV criteria and also based on a “bipolarity specifier” criterion. This broader interpretation of bipolar disorder simply omitted the duration criterion for hypomania (instead of 4 days, no time requirement was imposed); and added 1 more option to the mood criterion (in addition to elated, expansive, or irritable mood, “increased activity” was also allowed, based on prior research).

Using DSM criteria, 16% of patients with bipolar disorder had been given a diagnosis of major depression (underdiagnosis). Using the broader criteria, this figure rose to 47%: nearly half of the patients diagnosed with unipolar mood disorder exhibited significant “bipolarity.”

On the other hand, if bipolar disorder is better conceptualized as a dimension-a continuum-there should be a smooth gradation of MDQ scores from low scores among patients diagnosed with MDD to high scores among patients diagnosed with bipolar disorder. Figure 2 shows the distribution of MDQ scores in patients independently diagnosed using DSM criteria, and the large sample sizes, in a recent study examining this issue. 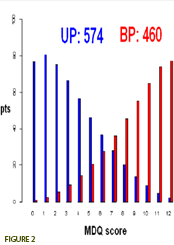 Although the researchers regard this study as evidence of discrete diagnoses-note the “gap” between the unipolar group and the bipolar group-the curves are clearly continuous. No “step-offs” offer a non-arbitrary point at which to divide the 2 diagnoses. And although there is a low point in the middle around scores of 6 or 7, still there are many patients with such scores, roughly half from the unipolar group and half from the bipolar group. These curves even look like wave forms, do they not?

Were there any doubts that these data represent continuous distributions of symptoms, with no gap, no “zone of rarity” between them, the combined curve makes that clear, as shown in Figure 3.

The value of particles
Although the data from Parker and collaeagues6 strongly favor viewing bipolarity as a property like wavelength that exists on a continuum, a particle-based psychiatric diagnostic system is not without value. The DSM system has facilitated discussion and research for the last several decades. It offers a concrete approach to describing prognosis and treatment options to patients more analogous to the rest of medicine: you have X, for which if untreated we can usually expect a course of Y, and the best treatment is Z. 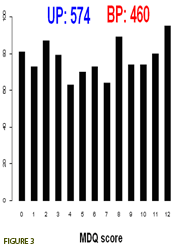 Even if the particle-based view, our current psychiatric system of diagnostic categories, is less phenomenologically accurate for bipolar disorder (as suggested by the data from Parker and associates6 and the similar studies that preceded it), we need not abandon the DSM system entirely. As an astute colleague pointed out, “changing the entire diagnostic system of psychiatry more than a few times in a century is probably not a good idea.” (Katzow JJ. Personal communication; 2006.)

Instead, we can simply adopt “complementarity,” as have physicists for decades: sometimes light is better conceptualized as a particle, sometimes as a wave. So in psychiatry: sometimes it is better to use a system of categories, like the DSM; and sometimes a system of dimensions, like the “mood spectrum” concept, in which DSM diagnoses simply mark positions on a continuous distribution of human experience, as in Figure 4.

A more thorough explication of this suggestion can be read in the original article, including use of spectrum-based tools such as the Bipolar Spectrum Diagnostic Scale and the Bipolarity Index; and spectrum-based explanations of bipolar disorder for patients.2