Catch up on all the latest in psychiatric comorbidities.

Psychiatric and medical comorbidities can complicate the differential diagnosis and hamper treatment success. Thus, investigators around the globe continue to examine how these comorbidities interact with each other. In this Research Roundup, Psychiatric TimesTM looks at clinical issues and implications of comorbidities associated with depression, eating disorders, COVID-19, and more.

Depression, Bipolar Disorder, and Sleep in Children and Adolescents

Recently, investigators conducted a narrative literature review of affective disorders and sleep difficulties in children and young people, seeking to understand the relationship between sleep and both depression and bipolar disorder.

A Simple Concept With Complex Implications

Helping Patients With Attentional Difficulties and Maladaptive Use of Psychoactive Substances

Monica Comsa, FRACP, of the Child and Adolescent Mental Health Service at Cumbria Northumberland, Tyne and Wear NHS Foundation Trust in the United Kingdom, and colleagues found that parasomnias, narcolepsy, and sleep-related movement disorders are associated with depression in children and adolescents. Additionally, children and adolescents with depression can present with a number of sleep difficulties, which are also associated with several other issues such as more severe depression, greater fatigue, suicidal ideation, physical complaints, pain, and decreased concentration.

On the other hand, insomnia, obstructive sleep apnea, and circadian rhythm disorders are associated with both depression and bipolar disorder in children and adolescents. Sleep difficulties can occur before, during, and after an episode of depression or bipolar disorder.

“Sleep disturbances among adolescents with bipolar disorder can affect the severity of depressive and manic symptoms, are a poor prognostic indicator, and have been associated with social and academic impairment,” said Comsa and colleagues.1

These sleep difficulties may be the result of medication. According to the investigators, antidepressants and antipsychotics can directly affect sleep architecture, and clinicians should be cognizant of this problem when prescribing and might instead consider nonpharmacological interventions. These interventions for sleep problems might minimize the risk of relapse in affective disorders.

Investigators suggested that a multimodal approach to target both the affective and specific sleep disorders is the ideal treatment plan. “Psychoeducation, consistent sleep-wake schedules, and tailored interventions for addressing sleep problems should play an important role in the prevention and treatment of mental health difficulties, at any age,” they wrote. “Concomitantly addressing sleep problems can lead to an increased remission rate of depression.”1

More research is required to understand the impact of combined interventions on clinical outcomes, concluded investigators.

“Of most importance is the impact of specific treatment for sleep disorders on the long-term outcome of affective disorders. Clinicians need to know if better nights reliably lead to better days.”1

There is a moderate prevalence of impulse control disorder (ICD) and behavioral addiction (BA) comorbidities in individuals with eating disorders (EDs), investigators have found in a first-of-its-kind meta- analysis.

Because the prevalence has never been systematically examined, Daniel J. Devoe, PhD, MSc, and colleagues performed a series of random effects meta-analyses of peer-reviewed literature reporting prevalence of ICDs or BAs in individuals with EDs. The investigators included 35 studies with a total of 9646 individuals who had an ED and analyzed the prevalence of different behavioral addictions among these individuals. The mean age of participants was 25.5 years (range, 16.7-43.9), and 97.7% were female.1

Results showed that stealing/shoplifting behaviors were the most common form of behavioral addictions in individuals with EDs, with a prevalence of 30%. Devoe et al also noted prevalence of pathological/compulsive buying at 19%, kleptomania at 18%, and pathological internet use at 12%. Intermittent explosive disorder, trichotillomania, and gambling had prevalence rates of 5%, 3%, and 2%, respectively.1 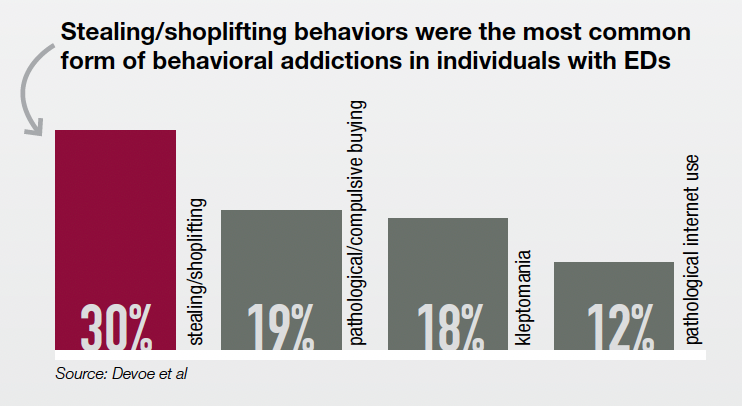 “Although causal inferences cannot be drawn, the numbers strongly suggest that clinical screening/monitoring of ICDs/BAs should be part of the clinical routine in cohorts with EDs,” Devoe et al concluded.

Although treatment guidelines do not provide specific prescribing recommendations for antidepressants in individuals with diabetes, effective treatment of depression in patients with comorbid depression and type 2 diabetes is important for both conditions.

“This review has highlighted the gap in our knowledge about which antidepressant agents are being used in adults with comorbid depression and [type 2 diabetes], and alongside which concurrent medications and comorbidities. Thus, we are unaware of the extent to which such individuals are at risk from the risks associated with polypharmacy and other adverse effects,” wrote the study authors.1

Investigators also found that women with type 2 diabetes are more likely to be prescribed antidepressants versus men; however, the difference is less than in the general population. Additionally, individuals with more advanced type 2 diabetes mellitus who use insulin were as likely to be prescribed antidepressants as those who did not use insulin.

“This is the first systematic review to our knowledge that investigates the prevalence and characteristics of antidepressant prescribing in adults with comorbid depression and [type 2 diabetes],” the study authors wrote. They added that, “There is an urgent need for longitudinal studies to inform guidelines on the long-term safety and effectiveness of antidepressant prescription in persons with comorbid depression and [type 2 diabetes].”1

With a lack of evidence to support the long-term use of antidepressants in individuals with type 2 diabetes, special care should be taken when prescribing antidepressants—especially in more complex patients who have higher risks of potential adverse events.

“Future studies including data on outpatients and inpatients with and without psychiatric disorders and COVID-19 and taking into account main medical risk factors of severe COVID-19 (ie, age, medical comorbidities, and obesity) will be important to determine whether the risk of hospitalization and mortality due to SARS-CoV-2 infection is similar or different across psychiatric diagnoses and psychotropic medications prescribed,” Hoertel et al concluded.

Results of a recent study on gender and psychiatric comorbidities in individuals with psychotic depression (PD) found that comorbidities have significant implications for PD age of onset and outcomes.

Using the Northern Finland Birth Cohort 1966 and other national registers, Miika Nietola of the Department of Psychiatry at the University of Turku and colleagues analyzed 12,058 individuals who had been followed since they were in utero for lifetime psychiatric diagnoses, age of illness onset, hospitalizations, disability pension rate, and mortality. Fifty-eight individuals in the sample had received a lifetime diagnosis of PD (male, n = 23; female, n = 35); the lifetime prevalence of PD in the participants was 0.5%; and the median age of PD onset for participants was 40.2 years.1

In comparing outcome variables in subgroups for gender and comorbid PD or alcohol use disorder (AUD), the investigators identified the prevalence of comorbid personality disorders at 38% and comorbid AUDs at 41%. Results showed that psychiatric hospitalization was more strongly associated with male gender (P = .03), personality disorder (P < .01), and comorbid AUD (P < .01). Comorbid PD also was associated with earlier onset (P < .01) and higher mortality (P = .03) and was more common in men than women at 61% and 29% (P = .03), respectively. However, Nietola et al found no statistical difference related to gender in the disability pension rate for individuals with PD.1

Since little is known about the effects of gender and comorbid psychopathologies on PD prognoses, the investigators stated that this study’s findings highlight a need for further research on these effects in individuals with PD and on PD in general—especially since comorbid personality disorders have been associated with poorer outcomes in individuals with nonpsychotic depression. They also suggested that clinicians control the effects of gender and comorbidity as confounding factors in PD trajectories.1

“Clinical implications of high alcohol use and personality disorder comorbidity in PD include rigorous assessment of these disorders in everyday practice and active implementation of effective treatments,” Nietola et al wrote. “There are potential possibilities to improve outcomes of PD by focusing more on those detrimental comorbidities that appear to associate with a malign course of illness.” 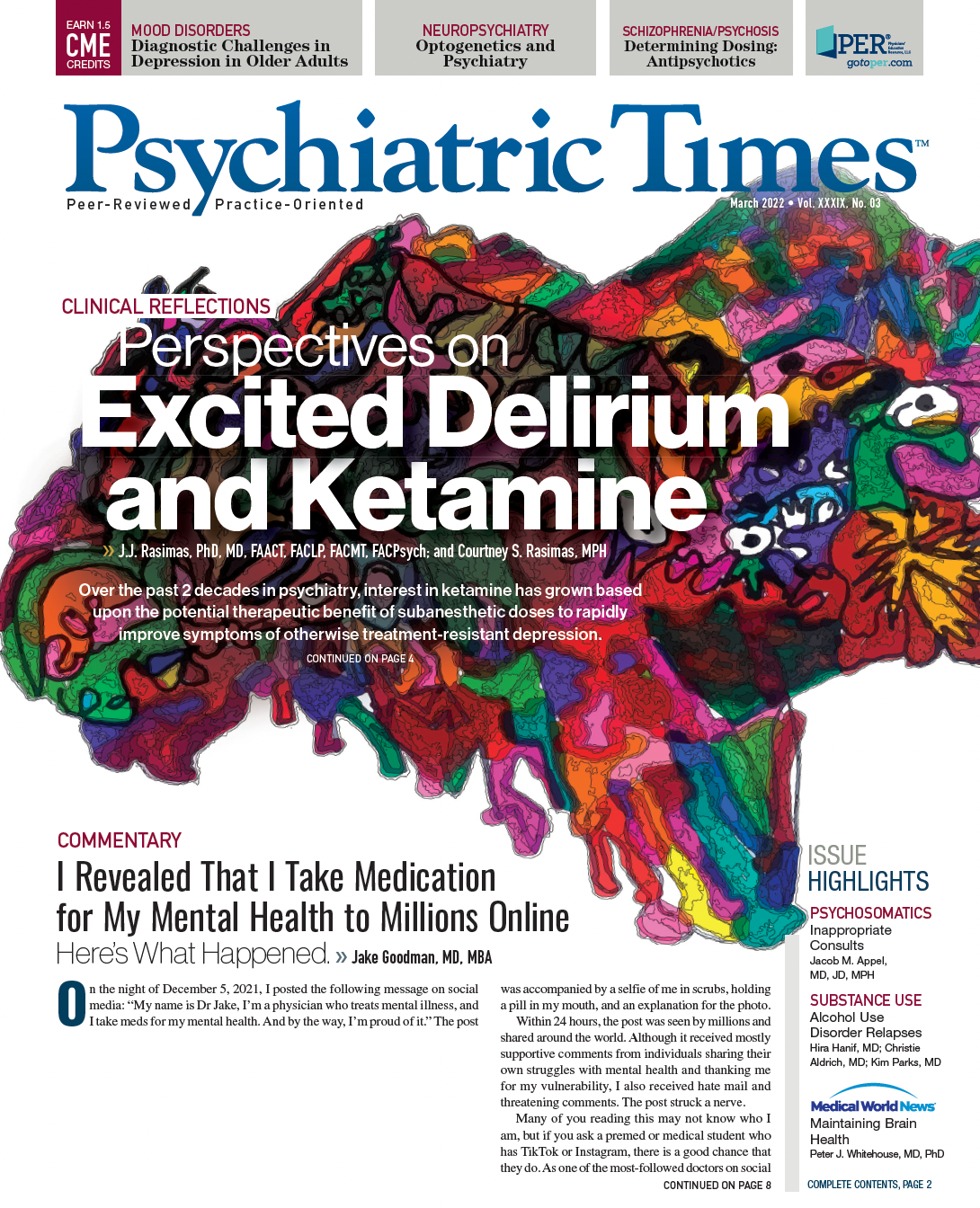